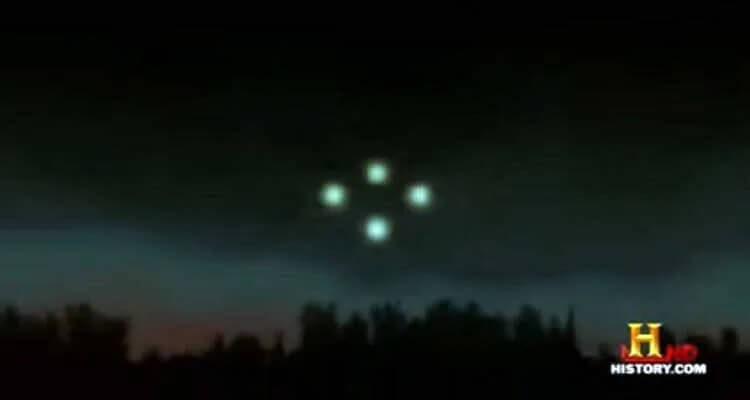 • In the 1990s, Jack Bushong (pictured above) worked as a radar operator for the National Weather Service in Grand Rapids, Michigan. On the night of March 8, 1994, Bushong couldn’t identify an illumination on the screen like he’d never seen before. When he called the emergency dispatcher in Ottawa County to see of they were picking it up, he learned that they were getting calls from the public and the police. The images on his radar screen corresponded with what people were reporting on the ground. But what was it? It was an object in the sky, but it wasn’t a meteorite or a radar glitch. Then the object broke apart and began hovering and making quick 20-mile “jumps” across the night sky. Then these separate objects appeared to form a wide triangle moving over Lake Michigan. (listen to 31:11 minute 911 recordings from the 1994 Lake Michigan UFO incident below)

• Bushong spent his career with the National Weather Service, moving on to another meteorological station, received awards and finally retired on good terms. Some co-workers did ridicule him for what he claimed to have seen over Lake Michigan in 1994. “I kept my mouth closed, and I learned it pretty quickly,” he said. But Bushong was not alone. There have been considerable number of pilots and others have decided that it is better to keep quiet about such sightings – supported by a government policy to dismiss UFO sightings as a general thing.

• In the 1960s, then-US Congressman Gerald R. Ford of Grand Rapids, Michigan called for a parliamentary investigation and wrote a letter calling on the government to stop “misleading the people.” Well, after more than 50 years that intelligence report on UFOs was finally released in June 2021. The government finally admits that people have seen something that no one can explain. It even authenticated videos taken of UFOs by US military pilots. For Buchong, this was ‘vindication’ for man who tracked 1994 sightings on radar. It made him come out and talk again. Now he’s thinking of writing a book about the incident. “I think I was waiting for this proof,” he said.

• The 1994 Lake Michigan UFO sightings had a lasting impact on others who saw it. Holly Graves and her family were among the 911 callers watching the slowly spinning lights from their front yard. “It was like a Christmas illumination,” Graves recalled. The lakeside incident attracted a lot of media attention and she kept her children out of school for a while. “They really had a hard time,” Graves said. “They know what they saw, but it seems like everyone still laughed at you.” Her now adult children still don’t talk about sightings. “I’m glad my family saw it,” she says. “It’s like once in a lifetime. It’s the experience I bring to my grave with me.”

Grand Rapids, Michigan (WOOD) — Jack Bushong was convinced he would lose his

It was the night of March 8, 1994. Bushong’s radar, which worked for the National Weather Service, was illuminated by something he had never seen before.

He was calling an emergency dispatcher in Ottawa County and was looking for help in identifying the lights over the Netherlands. The coordinator received many calls. Police officers were also calling.

When Buchong learned that his phone was being recorded, he said “I’m really scared” and couldn’t sleep on it. He was wondering what people were trying to say about what was on his screen.

“People just think you’re Cook,” he said, or “You’re lying, you can’t trust me. I should be a scientist and skeptical.”

Buchong was looking at images on his radar that corresponded to what people were calling from the ground. He had to control his radar by hand to focus on the sky south of his station in Muskegon.

“What the hell is that?” The recorded dispatch call caught him saying in a surprised voice when he

He examined his mental checklist for all the meteorological phenomena and technical glitches he knew, and said that what he saw did not fit into any of them.

He saw what looked like a solid object that “broke together”.

“Each jump travels about 20 miles,” he recalled. “They were hovering and then jumping. Hovering and jumping.”

After looking at them for a while, they appeared to form a wide triangle moving over Lake Michigan. He said they seemed solid.
“It was a flying tin can,” he said.

Despite worrying about losing his job, Bushong continued to be promoted, moved to a larger meteorological station, predicted awards, and finally retired. He said the NWS treated him well, even though some individuals criticized him and rejected what he saw. So he shut his mouth about it.

“I kept my mouth closed, and I learned it pretty quickly,” he said.

He wasn’t the only one. There have been considerable national reports that pilots and others have decided that it is better to

keep quiet about such sightings. A long-standing government approach may have contributed to it: it dismissed UFO sightings as a general thing that people just didn’t see right.