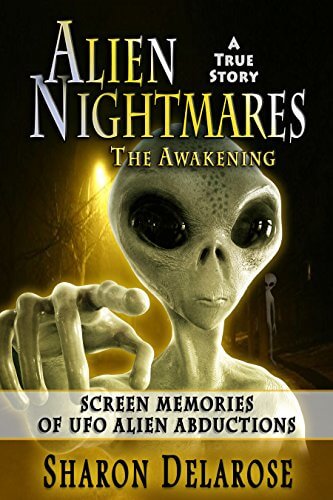 This is probably the weirdest blog post I’ve posted to date, and I am writing it in all seriousness. Allie Marrs dog was sound asleep and actively dreaming, loudly yipping with her feet paddling as if she were running a marathon. She had often wondered what the dogs dream about, and she figured it’s probably about chasing squirrels, or playing with one another, and it always involves softly barking and twitching feet.

Even her hamsters dream, as she discovered last year while watching one chirping and twitching in his sleep. Sometimes hamsters pretend to be asleep but they are really curled in a ball eating. But he was really asleep, laid flat out on his side, his body and feet twitching like a dog having a squirrel dream.

Sometimes weird thoughts come out when the brain is pondering several things at once, and this time was no exception. Her dog was dreaming a few feet off to her left, as she was creating a new cover for Alien Nightmares: Screen Memories of UFO Alien Abductions.

Most of her alien memories came in the form of vivid nightmares, some being memories resurfacing, and others being events in the moment which afterwards manifested as nightmares, hence the name of the book that tells her personal story.

In one of these nightmares she saw several UFOs, and then she was somewhere else with a group of people. In the middle of it all, a bizarre anomaly —her cat got wedged in the space between the inner and outer window of the house. She speculated that he’d gotten stuck there during the abduction, as if they were abducting her cats right along with her.

Not all abductions involve being moved through solid walls. Sometimes they lure you outside, which was the primary tactic they used on her. I’ve read where they sometimes lure an abductee close to a window, and transport them through the window.

So here was her cat, stuck in between the inner and outer window, which he couldn’t possibly have managed on his own. At the same time, her UFO dreams sometimes included seeing rows of cats and dogs in cages, and sometimes even her own cats in containers.

All this was rattling around in her head as her dog laid there yipping in her sleep, feet paddling, sometimes rolling onto her back as she does outdoors when rolling on a dead bug. And that’s when the question hit :

Do dogs and cats remember being abducted by aliens? Do they have nightmares about it? Do they dream about little gray aliens and UFOs?

The gray aliens attempt to mask our memories with screen memories, or they just erase the memory altogether giving us missing time. Whether they diddle with our memories to protect our fragile psyches, or whether they just prefer to operate in secrecy as best they can, is a matter of speculation.

But would they have the same regard for cats and dogs? Would they mask or erase the memories? If you are abducted by aliens, and your cat or dog is paddling in his dreams as if trying to cross the English Channel, is it possible that he is reliving his very own alien experiences? Is he having an alien nightmare?

If you are curious as to what alien abductees dream about, Alien Nightmares: Screen Memories of UFO Alien Abductions (non-fiction) will take you deep inside the nightmares and resurfacing memories of one such. And it will introduce you to the UFO waves in Ithaca, New York – Wytheville, Virginia – Gulf Breeze, Florida – the Hudson Valley in New York – along with the Big Blackout of 1965 that affected six states and a portion of Canada just one month before the Kecksburg, Pennsylvania UFO crash.