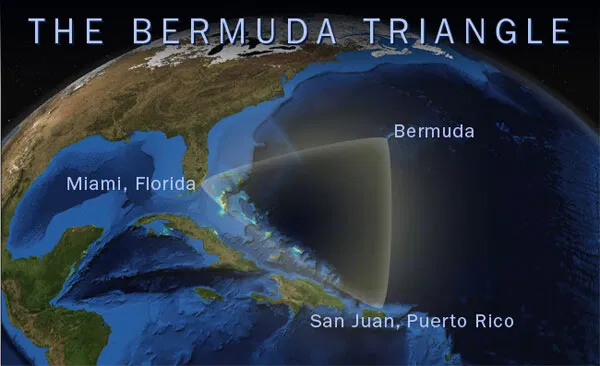 Also known as the “Devil’s Triangle”, the Bermuda Triangle is defined by points in Bermuda, Florida and Puerto Rico. It extends less than a thousand miles on both sides. The triangle does not exist according to the US Navy and the name is not recognized by the US Council on ‘geographical names’.

Many theories have been put forward to explain the extraordinary mystery of missing planes and ships: extraterrestrials, residues of Atlantis crystals, humans with antigravity weapons or vortexes.

Strange magnetic fields and methane gas emissions from the ocean floor are the favourites of the more technical. Weather (storms, hurricanes, tsunamis, earthquakes, waves, currents) and other natural and human causes are favored among sceptical researchers.

Is it possible that this imaginary triangle is proof of extraterrestrial activity?

One thing is certain: in the past century, the Bermuda Triangle “swallowed” ships and planes (most of which were never found simply disappeared) and was responsible for the loss of hundreds of lives.

In the center of the Bermuda Triangle, two giant pyramids made out of thick glass have been discovered. The technology found under the vast ocean is a mystery to modern science. The anomalous structures located at a depth of 2,000 meters were identified by Dr. Meyer, a German oceanographer and his team using sonar equipment.

Meyer firmly believes that the discovery of secret and strange pyramidal structures in the center of the triangle could shed light on the mysterious disappearances of ships and planes associated with the Bermuda triangle.

According to reports, the number of mysteries around the pyramids is something that no one has been able to answer. It is said that the pyramids located at a depth of about 2 kilometers are made of some type of glass which may be one of the main reasons why the area had anomalous disappearances.

There have been reports of these pyramids

American oceanographers are said to have discovered anomalous structures more than 20 years ago, concluding that the surface of the structures was flat, suggesting that they were made of some type of glass.

The alleged pyramids, which no one was able to photograph, would be three times the size of the Great Pyramid of Giza. I suppose that, in the end, it is up to the reader to believe or not in such mysterious discoveries.