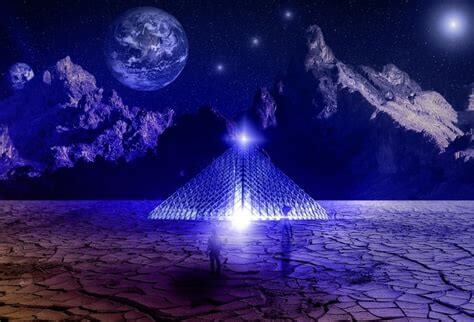 We all know that Earth is the only planet in our solar system where intelligent life exists. But some people seriously believe that life can be extraterrestrial. Most often, not only science fiction writers but also scientists make an assumption that life is likely to be on Mars.

Recently, scientists have put forward theories that billions of years ago, Venus was also populated not just by some organisms, but by an intelligent civilization that was smarter than human.

Back in 1996, amazing images were taken to the NASA center by the Venus Radar Mapper. This small spaceship was sent to Venus precisely for one purpose: to explore this planet and learn more about it.

This probe took a huge number of images of the Venus’ surface, and till today, these photos have made scientists scratch their heads. There were photos that depicted a winding canal with a length of more than 600 kilometers that resembled the fragments of ancient rivers that evaporated, like the atmosphere of Venus itself.

Nevertheless, a study of the soil of this planets showed that these channels were created much later than the rest of the relief of the planet.

Some researchers generally put forward fantastic theories and say that these channels are nothing more than roads that were created not by nature, but by some kind of civilization.

Some experts believe that intelligent life and even a whole race could once exist on Venus. Researchers have long proved that once Venus was very similar to our planet.

Even later, scientists again took pictures that depicted the silhouettes of the most real pyramids and a structure resembling the Sphinx, as in the Egyptian Giza.

Scientists saw the same pyramids on the surface of Mars and the Moon. So, is it possible to compare all these structures and say that on these planets, there once existed an intelligent race? Perhaps even the same one that once built the pyramids on Earth and then flew to other planets.

The past of the most beautiful planet in the solar system.
Already in our time, in 2003, another probe sent to Venus confirmed during the study of reliefs and soil that earlier, this planet had been covered by a huge ocean, and in an atmosphere that almost evaporated, traces of helium and nitrogen, as well as other elements were found that previously had been met only on Earth.

Even more, the atmosphere of Venus contains a lot of carbon dioxide which probably came as the result of the activity of not only the human body but also almost all living things on Earth.

Therefore, it can be argued that, in the presence of water and other constituent components, highly developed creatures had previously lived on Venus. Maybe they were like us, or maybe they were much smarter if they built pyramids on different planets.

Until the end, it is not known exactly who lived on this planet, but scientists can say for sure that its past is very similar to the present Earth.