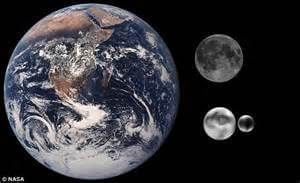 We always have some weird thoughts in our minds regarding space and the universe. This topic is so much vast that it cannot be explained in one article, but many of us always have this question in mind: “What Happens If Pluto replaces Earth’s Moon?”

Of course, in reality, the movement of such massive celestial bodies is beyond our capabilities. However, if you imagine that in some hypothetical way the Moon will disappear, and instead Pluto will appear in the same place, moving at the same speed as the Moon is moving now, then several interesting and not quite obvious consequences will arise.

In the beginning, Pluto will revolve around the Earth in the same way that the Moon rotated.

Evaporating gases form a coma around Pluto thus it will become a giant comet, surrounding itself with a giant coma. The coma will consist of gases – mainly nitrogen and a small amount of dust.

Coma of Pluto will reflect a large amount of sunlight, which on average will make nights on Earth a little brighter, and days a little less sunny.

Nitrogen has an average thermal velocity of 470 m/s at a temperature of 293K (average temperature on Earth). This is not so far from Pluto’s second cosmic velocity – 1200 m/s, so that under the influence of the solar wind a coma of Pluto will lose gas molecules and a tail will form in Pluto, like in a comet!

As Pluto moves around the Earth, the tail will constantly collide with the Earth. This will not significantly affect the Earth’s atmosphere, and it is mainly composed of nitrogen, but it will create beautiful meteor showers when dust particles from the tail of Pluto burn out in the atmosphere.

Due to the active degassing of Pluto caused by heating, it will also lose rather large rock fragments over time, which will likely lead to the fall on Earth of a large number of meteorites over the entire surface of the planet.

Also, the degassing of Pluto over time will lead to difficultly predictable perturbations of its orbit. Most likely, sooner or later Pluto will approach the Earth to the distance of the Roche limit and will be torn apart by tidal forces.

After that, all frozen gases and ice in the bowels of Pluto will begin to heat up by the Sun and evaporate. This will lead to the fact that the Earth will be surrounded by a huge cloud of gas. Over time, this gas will partially fall to the Earth and replenish the Earth’s atmosphere (including greenhouse gases such as methane or carbon dioxide), partially will be carried away into space by the solar wind.

The stony remains of Pluto in this scenario form a system of rings around the Earth, something similar to the system of rings of Saturn. However, the rings, especially the inner ones, will gradually fall to the Earth due to the resistance of the upper layers of the Earth’s atmosphere.

Needless to say, humanity is very likely not to survive such a development of events, especially in the last stages.