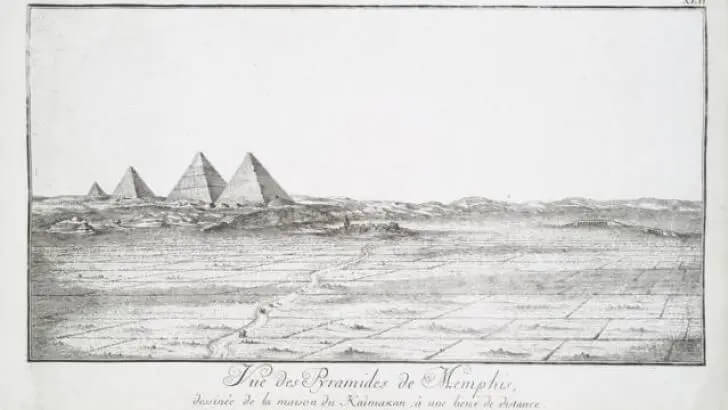 According to a Danish navy captain and researcher who lived a couple of centuries ago, there was the fourth great pyramid in Giza. In the 1700s, sailor Frederic Norden traveled throughout Egypt. He described in detail local attractions, making extensive notes and drawings of everything that surrounded him. The researcher recorded absolutely everything that aroused his interest, including people, monuments to the pharaohs, architecture, installations, maps, etc. All the data collected was subsequently published in the book “Voyage d’Egypte et de Nubie.”

In his book, Nordern describes the fourth great pyramid of Giza:
“There are four of them, which get the attention of the curious.”

But there are only three big pyramids in our time in Giza! However, Norden even draws the fourth pyramid in his book. The traveler even gives a description of the mysterious object. According to him, one of the four pyramids was different from the others. It was made of a material similar to solid black granite and s tood out against the background of other similar objects.

Official scholars, however, tend to reject the fact that the fourth black pyramid in Giza really existed. Scientists suggest that Norden could mistake one of the small pyramids surrounding the main complex for another great pyramid, but this is highly doubtful, because Norden describes the fourth pyramid very accurately. And he writes that it is made of black stone. However, the small satellite pyramids are all made of sandstone.

Interestingly, the description of the fourth pyramid and illustrations of Norden are of excellent quality. And from them, it is clear that the fourth black pyramid is located at some distance from the three main pyramids of Giza.

In his book, Norden also points to the existence of seven (possibly even eight) smaller pyramids on the Giza plateau.

There are a few options. Either Norden deliberately misled the scientific world, or the pyramid really existed. But where could it disappear? After all, no debris and traces were found.

Yes, everything is simple. Either it was taken by aliens, or Norden visited a parallel universe.