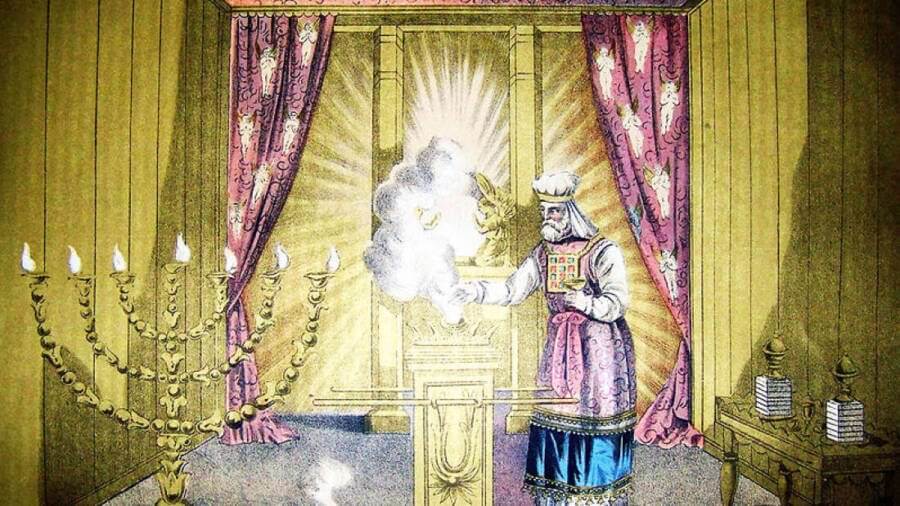 Frankincense, myrrh, and… cannabis? Archaeologists have discovered traces of weed on an ancient Israelite altar, suggesting that getting high was a religious ritual for the Hebrew people.

The discovery was made using gas chromatography and mass spectrometry testing on an Iron Age Judahite shrine at Tel Arad, in Israel’s Negev desert. The cannabis altar was in the inner sanctum of the temple, known as the cella, or holy of holies.

“We know from all around the Ancient Near East and around the world that many cultures used hallucinogenic materials and ingredients in order to get into some kind of religious ecstasy,” Eran Arie, curator of Iron Age and Persian Periods archaeology in the Israel Museum in Jerusalem told CNN. “We never thought about Judah taking part in these cultic practices. The fact that we found cannabis in an official cult place of Judah says something new.”

Arie published a report on his findings in the Journal of the Institute of Archaeology of Tel Aviv University with independent researcher Baruch Rosen and Dvory Namdar, a chemist and archaeologist from the Volcani agricultural research center. The burnt residue on the top of this altar contains compounds found in cannabis. It was excavated from the shrine at Arad and rebuilt in the Israel Museum from the original archaeological finds. Photo courtesy of the Israel Antiquities Authority, ©the Israel Museum, by Laura Lachman.

Experts believe the site, first discovered in the 1960s, was active from the ninth century BC to the beginning of the sixth century BC. At some point while the temple was still in use, worshippers buried the two limestone altars on either side of the stairs leading up to the stella.

In the dry desert climate, the burnt remains on either side were preserved over the millennia. Testing conducted by the original archaeologists who unearthed the altars proved inconclusive, so it was assumed that they were used to burn animal sacrifices.

Now, modern scientific testing suggests otherwise: One altar was for cannabis, the other, larger one for frankincense, an aromatic incense made from resin of the Boswellia tree. (The frankincense was significant, since it had never been found at an dig site before, but given its appearances in the bible, its presence came as no great surprise.) The larger altar from Arad’s holy of holies was used for frankincense offerings. Photo courtesy of the Israel Antiquities Authority, ©the Israel Museum, by Laura Lachman.

The traces of teterahydrocannabinol, cannabidiol, and cannabinol—substances that are found in cannabis—were far more surprising. Initially, the team wondered if Namdar, who had just started a job at lab researching weed’s use in medicine, had accidentally contaminated a sample. Then an independent lab confirmed the result.

The leading theory is that worshippers were using the cannabis to get high. The residue showed that the drug had been mixed with animal dung, which would have made the cannabis burn at a lower temperature, allowing for the activation of the drug’s psychoactive compounds. The frankincense likely was at a separate altar because it releases its aroma best when burned at high temperatures—the residue there included animal fat, which would raised the temperature to the desired level.

Both the frankincense and cannabis were likely quite expensive, as they would have been brought to Israel by traders from afar.

“Importing cannabis and frankincense was a big investment that could not be made by some isolated group of nomads, it required backing from a powerful state entity,” Arie told Haaretz. “If they just wanted to make the temple smell nice, they could have burned some sage, which grows in the area of Jerusalem.”

The cannabis may have been imported to the Middle East from southeastern Russia, or China, where the burnt remains of 2,500-year-old plants were discovered in an ancient cemetery last year. It likely would have been in resin form, known as hashish.

The report suggests that the ritual use of cannabis was likely widespread throughout Israel at the time, as the shrine where they found the drug would have been run by a local garrison of Judahite soldiers sent from Jerusalem. If that’s true, it’s possible that biblical scholars don’t know the word the ancient texts used for the plants—or the custom may have died out before the scripture was written down.

So how did it become illegal ? So I looked up on Wikipedia.

The legal history of cannabis in the United States pertains to the regulation of cannabis for medical, recreational, and industrial purposes in the United States. Increased restrictions and labeling of cannabis as a poison began in many states from 1906 onward, and outright prohibitions began in the 1920s. By the mid-1930s cannabis was regulated as a drug in every state, including 35 states that adopted the Uniform State Narcotic Drug Act. The first national regulation was the Marihuana Tax Act of 1937. Cannabis was officially outlawed for any use with the passage of the 1970 Controlled Substances Act. Multiple efforts to reschedule cannabis under the CSA have failed, and the U.S. Supreme Court ruled in United States v. Oakland Cannabis Buyers’ Cooperative and Gonzales v. Raich that the federal government has a right to regulate and criminalize cannabis, even for medical purposes.

What a crazy Thing they did.  Video Below will Blow your Mind ! Media Control once again.

That’s right. Weed. By order of King James I, every colonist had to supply 100 crops to the Virginia Company to ship back to England and trade. Even George Washington and Thomas Jefferson grew hemp on Mount Vernon and Monticello. Marijuana wasn’t just a desired crop; it translated into big government money. The problem is, while early regulation provided financial purpose and medical protection for the average consumer, deep-seated cultural misconceptions have resulted in today’s archaic marijuana laws.