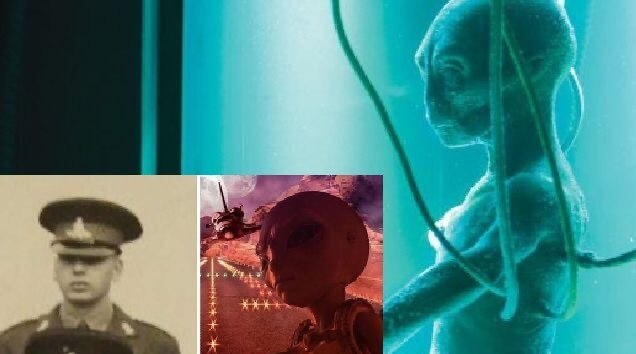 A 66-year-old, English man, Bill Brooks seemed to live the most ordinary life, being a professional musician.
Interestingly, according to Bill Brooks, he was abducted by aliens and for years the memories of the abduction and subsequent strange incidents were suppressed in his memory and he did not remember anything about it.When Bill Brooks was 44, he walked home one evening after a concert.
Suddenly he saw a UFO, after which suddenly a neural bomb exploded in his brain, he sharply and immediately remembered many events that had taken place in his life before and which until now had been blocked by unknown forces.He recalled that he first saw aliens when they abducted him at the age of 10.
They looked like Norwegians with blue eyes and blond hair (that is, Brooks faced the “Nordics”).
There were four of them in total, they were sitting in their ship, which flew over the field and created the very circles in the fields of wheat.

Noticing the boy, they took him to their ship and there they endowed him with the superpowers of telekinesis – now Bill Brooks could move various objects with an effort of will.

Later in his life, he met aliens numerous times, and not only with “Nordics”, but with “grays” and even with reptilians.
They conducted various medical experiments on him, which included injecting implants into the body and then removing them.

However, the strangest incidents happened to Bill Brooks when he went to serve in the British army.
According to him, while serving in the army, he had many completely surreal experiences, one of which was associated with an experiment that was carried out on him in the secret military chemical laboratory of Port Down (Salisbury).

The same experiment, which in 2018 was attempted on Skripal by poisoning him with the deadly agent Novichok, of which Russia was accused.
And before that, Port Down was associated with the strange death of more than a dozen of its own employees.

When Bill Brooks got to Port Down in the 1960s, they began to give him some psychedelic drugs, forced to look at a spinning black spiral on the wall, and was sometimes given various strange commands.
All this was allegedly connected with experiments to control the mental state of soldiers in order to make them more aggressive and at the same time completely obedient to the commanders.

In 1968, Brooks was sent to Germany, to the Dempsey barracks in Zennelager, where he met a certain supernatural entity:

“My room was on the second floor of a huge four-story building, built before World War II. I shared it with three other young soldiers, each had their own locker and bed.

I thought it was a Welshman who sleeps by the window, got drunk. Slightly raising myself, I saw that it was not really him. I saw a terrible thing that looked like a wounded soldier burning from within. And he had no head. “

That ghostly vision alone could drive a person mad, but there was even more shock ahead of Bill Brooks.
He learned that an alien creature was being held captive at the same base, which was placed here by American military officials.

And then the following happened:

It was a late autumn evening, 8 or 9 o’clock. We were in the field at our forward positions during training to simulate a gas attack. I was with a soldier named Joe. At some point, we saw a strange orange fog and took it for the beginning of training. ”We ran to our camp to the other soldiers to warn them to put on gas masks, but saw that they were all sleeping peacefully in their cars.

We somehow managed to wake them up and tell them about the strange fog. To this, we were told that it was impossible because the gas attack training was unexpectedly canceled. Then Joe and I shrugged our shoulders, “Canceled, then canceled,” and also went looking for a place to sleep.

However, when Joe and I found a suitable spot and lay down, I saw an incredible scene. From the side where we saw the orange fog, a very bright light flared up and everything was clouded with haze. And when I turned away from the light and looked at our soldiers, I saw a scene that I would have considered impossible. “

The fact that the soldiers in his camp began to rise one by one and walk like zombies towards a source of bright light.
They moved as if in a trance.

“People walked at once as if they were given an order. They got out of the cars in which they slept at the edge of the field. They walked towards the light, and the light came from some object, which was located in the middle of the field.

Due to the bright light and thought, I could barely see something, but it seemed like a large vehicle. All our guys were tired after a full day of training, but they moved in unison with their eyes closed, they were still sleeping.

Joe and I were not affected by this influence, probably because we had not yet had time to sleep. I decided to go and see where our soldiers were going, but Joe asked me to stay put. I didn’t know then, but Joe saw that some people with pistols came out of the forest and they walked across the field straight in our direction.

Our car was parked about 100 yards from the edge of the forest, the field was on our right hand, and there, I now knew for sure, was a large UFO. Suddenly I saw a man in front of me in black overalls and with a small square blue badge on the sleeve. Then there were more men of the same kind and they were all with weapons in their hands.

They were all blond and all dressed alike. The man in front of me showed me his gun and then told me to go to the light source. I hesitated, I didn’t want to go there! “

Then Bill Brooks lost consciousness, and when he woke up, he saw that he was still on the field, and next to him were several high-ranking military officers.
The strange thing was that they were all dressed in an outdated military uniform, which had ceased to be used many decades ago.

Bill Brooks saw that they had a weapon in their hands and they pointed it at him.
Then he lost consciousness again, and when he regained consciousness, he was already in his barracks and everyone around him pretended that nothing had happened at all.
Then the military called him and Joe and apparently realizing that they still remember something, strictly ordered them both to be silent about everything that they saw at night.
After they signed a non-disclosure document, and then Bill Brooks simply forgot for years about this and other strange incidents in his life.
Until the very moment, until at the age of 44, he saw a UFO in the sky, returning home from a concert.

When Brooks remembered everything, he began to try to tell the truth about what happened to him.
He found Joan Summerskales, who studied the stories of Alien abductions and with her, he wrote a book about his experience titled “44: Based on a true story of a former soldier, including alien abduction”.
The book was published in 2016.