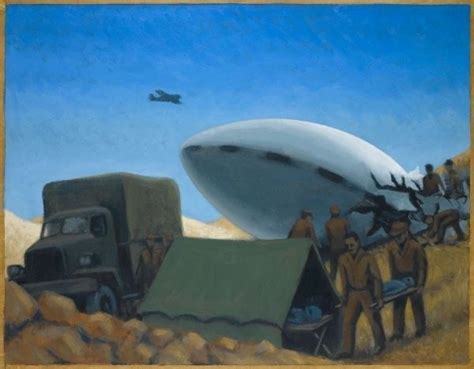 In the archive of ufologists, you can find several incidents in which UFO crashed and among the wreckage, they saw strange bodies of the dead, and sometimes even living crew members.
There are also a huge number of stories of how aliens abducted people and aboard their ships subjecting the abducted to strange painful medical procedures.
Could it be that the alien ship will crash at the moment when the abducted person is on board?
In the history of ufology, only one such case is known.
The mysterious case of Lorraine Dvorak Cardini, When a UFO crashed along with a Abducted person on board.

It was a calm summer evening in 1971 as California resident Debbie Clayton was getting ready for bed.
Her home was not far from the Edwards Air Force base, so Debbie was already used to the fact that military planes regularly fly through the sky creating noise.

However, the terrible noise she heard that evening was completely different and unlike anything else.
Most of all it looked like a rolling explosion or an extremely loud clap of thunder.
Debbie cautiously left the house and heard the nearby dogs barking loudly.

And then she saw a dark trail of smoke in the sky, which wriggled and fell down.
She saw something fiery, as if there was a big fire.
Debbie thought that it was a plane crash, and she did not want to go that way, realizing that she could see burnt bodies of people there.
But something strangely pulled Debbie there and she decided to go and see what was there.

When Debbie approached the place where the accident took place, she saw that the grass of a large area was burned, and in the center of the charred earth was a large object, shaped like a mushroom.
It was made of dull gray metal with dots that blinked green.
Debbie was amazed that the object appeared to be a single piece of metal, no welded joints, no seams at all, even without windows and doors.
However, the metal was in some places dented and torn, apparently from a strong impact on the ground.

She spotted humanoid bodies next to this object on the scorched earth.
They were thin, with grayish skin and small stature.
And among them, Debbie suddenly saw the body of a human.
It was a woman who looked quite ordinary, wearing a pink jumpsuit.

The woman was alive and frightened, but she sat and was looking around..
Debbie wanted to go to her and help her, but she didn’t have time.
Suddenly there was the noise of helicopter propellers and military helicopters were hovering in the sky.

At the same time, soldiers appeared from all directions and surrounded a section of the burnt field, and Debbie (and some other people who approached the scene of the accident) were told to leave or face unpleasant consequences.
Debbie had time to see how the military covered the mushroom-shaped object with a large piece of tarpaulin and how several people crowded around the humanoid bodies at once, carefully examining them.
What they did to the woman in the overalls remains unknown to Debbie.
The next morning, Debbie eagerly read the local newspaper, hoping to find a mention of what happened last night, but there wasn’t even a tiny note about it.
Debbie carefully checked all the news broadcasts on television, but nothing was reported there either.
Soon, several people like Debbie who saw the crashed UFO began to publicly resent and demand that the leadership of the military base tell them why they were hiding this incident.
In response, they received that nothing unusual actually happened here, and what they saw was just a military vehicle, with which there was a slight breakdown.

Things got even stranger when the victim of the alien abduction was found, who was the very woman in the pink jumpsuit that Debbie had seen.
The woman’s name was Lorraine Dvorak Cardin and she remembered very little about how she was abducted by aliens, but she remembered well the moment when she woke up next to the fallen ship and could not understand what was happening.
Lorraine said that the military took her from the field, put her in a military truck, and brought her somewhere, where they questioned her about the incident for some time.
Lorraine was still dysfunctional and felt like she was under the influence of drugs or alcohol, her speech was slurred and her eyes ached from the bright light.
Then Lorraine was again put in a mode of transport and taken away somewhere in San Francisco, which was far enough from her home, in Los Angeles.
Lorrain was simply dropped off and left somewhere in San Francisco.
She somehow got to the house herself.

Lorraine began to look for a specialist in order to undergo regressive hypnosis and remember everything.
The specialist turned out to be ufologist Albert Rosales.
Under gnosis, Lorraine began to tell that one night she was abducted right from her home by strange creatures.
Somehow they carried her through the walls of the house and lifted her onto their ship.
The ship flew somewhere, and then Lorraine was transferred to a huge alien mother ship.
These creatures dressed Lorraine in a pink jumpsuit.
Lorraine described the creatures as short, thin, translucent, and it also turns out that she saw them as a child.
These creatures abducted Lorraine from a young age.
They did not hurt Lorraine and at some point, she even learned to distinguish between them and divide them into men and women, although in appearance they were all equally asexual.
These humanoids had a leader who looked much more human than they did who was a female and from a distance, she could be mistaken for an ordinary woman.
With Lorraine, the humanoids and their leader communicated telepathically, and they also did something to her, but she could not remember these moments even under hypnosis.
Then she was again put on a small ship and they flew to take Lorraine to her house.
Somehow the UFO crashed and fell near the Edwards Air Force military base.

“I remember standing at the scene of the accident and was confused and disoriented. I saw the military kick the bodies of two dead aliens and I heard the leader’s voice in my head saying that they could not come to the rescue for fear of being discovered. I cried. when I saw how the military mistreated dead bodies.”

What do you guys think ?