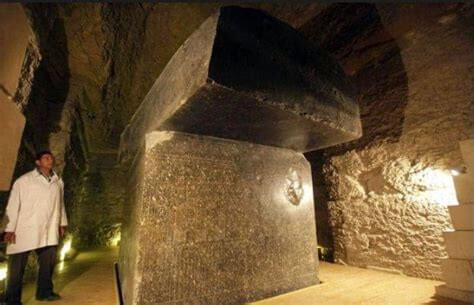 Giant sarcophagi made up of granite weighing 70 tons is located in narrow niches dug deep into the earth.
The sarcophagi are discovered in Saqqara, one of the oldest and largest archaeological sites in ancient Egypt.
Researchers are baffled that how it was possible to place these giant sarcophagi in such confined spaces and even today it remains an unsolved mystery.
How could it be possible?
Located on the west bank of the Nile, about 30 km south of Cairo, is the site of Saqqara, one of the oldest and largest burial sites in all of ancient Egypt.
The pyramid of Teti, the first ruler of the 6th dynasty of Egypt, towers over the giant cemetery.
Pharaoh built the pyramid and the nearby mortuary temple during his reign over 4,000 years ago.

The pyramid of Teti is very important, as it contains the oldest inscriptions in the world, part of the so-called “Pyramid Texts”, a collection of ancient religious writings dating back to 2400 BC, containing passages on Osiris, the Egyptian God of the afterlife, and instructions on how to prepare Pharaoh’s remains for his ascent to heaven after death.
In the texts of the pyramids, everything revolves around the stars, the king who becomes a star and who ascends to heaven to reach Osiris-Orion in the firmament.
What is important to emphasize is that the ancient Egyptians believed that in an era called “ZP TP” (usually transcribed as Zep Tepi literally “the first time”), the Gods lived among themselves, only to disappear again.
The texts of the pyramids mean that man can rejoin the Gods again.

To do this, you have to go through death: we are talking about an extra-dimensional journey of the soul.

Philip Coppens, author of The Rosslyn Riddle: The truth behind the Templar and Masonic mysteries.

Egyptologists specify these monuments as tombs, but it is believed that to Egyptians, they were not tombs at all, but doors to the afterlife.
So did these tombs serve as amplifiers for opening real access Portals to other dimensions?
It was through these structures that the king began his expedition to the otherworldly world, facing obstacles, dangers, and threats.
Had he overcome these threats, he would have had access to the realm of Osiris.
Remained undisturbed under the desert sands for centuries, the ruins of Saqqara hold the true mystery of the whole site, an enigma located just 800 meters from the pyramid of Teti.
In 1850, the French archaeologist, Auguste Mariette made an extraordinary discovery: a huge underground bunker, the Saqqara Serapeum, a maze of tunnels dug into the rock.

Inside, giant sarcophagi of granite are placed that are thought to have been transported from the city of Aswan some 960 kilometers away.
There are dozens of them and they weigh about 70 tons each, each made from a single block of granite, so smooth that it can be mirrored.
But the real mystery is how the ancient Egyptians managed to transport these huge boulders for kilometers, and then place them in the narrow underground labyrinth of the Serapeum.
For what purpose? It’s a real puzzle.
We have to imagine the ancient Egyptians digging kilometers and kilometers of underground tunnels in the rock, making niches on the sides.
Then, they travel for days until they reach the city of Aswan to extract the hardest granite that exists from the rock and carry it, somehow unknown to us, down these underground tunnels.
Most scholars speculate that the Serapeum and its huge sarcophagi were made to house the mummified remains of the sacred Bee Bulls, believed by the ancient Egyptians to have come from heaven and honored with very elaborate ceremonies.
However, when Mariette opened the sarcophagi she found that they were empty except for a few bones.
On the site, in fact, the mummy of a single Bull Hapis was found.

This data has led some scholars to believe that in reality, the Egyptians feared the bee bulls, rather than worshiping them, because they were created by the Gods: being sacred animals, they expected them to die a natural death and once they died they were destroyed, shattering their bones which then they were sealed in sarcophagi.
This is a unique practice of its kind, as in ancient Egypt even animals were mummified, so when you find sarcophagi with only a bunch of bones inside, you have to wonder why when an Apis bull died, the Egyptians would crush the bones. and put a 35-ton lid on it?
Did they want to make sure they would never return in the future?
Scholars are perplexed, as the original purpose of these boxes cannot be fully understood.
Why are many of them empty?
Which technology is able to close the empty tank with eight cubic meters of internal volume?
Why was it closed empty?
The Serapeum is dug twelve meters deep and consists of three passages; the master is 68m long, 3m wide and 4.5m high, with 24 side chambers cut into the rock, of which the longest is 6 to 11m and 3 to 6m wide.
24 coffins containing 80 tons each, with 15-ton lids made of extremely hard granite and basalt.
The question is what tools have been used to achieve such precision.
According to Egyptologists, they are more than 3000 years old.
Nobody at that time had the tools necessary to work the hardness of this type of granite.
Only advanced technology, perhaps of alien origin, could create these tons and tons of heavy tombs.

The surfaces of these giant sarcophagi are perfectly smooth with precise and perfect edges, made from a solid block of granite of incredible thickness.
The interior features a flawless gloss, something like a mirror.
These 24 tombs must have had a purpose or use that no one has been able to understand.
It is said among researchers that the Serapeum in addition to being a necropolis is rather a magical place of which we know nothing more, where in fact there are the famous black boxes or sarcophagi.
Gabriel Silva, in his book “the Pharaoh”, defends the theory in which it is said that the black sarcophagi were completely sealed, creating a vacuum inside. He says some researchers have recorded anomalies via electronic devices.
Did these tombs serve as teleportation or ascension devices?
In the outer part of the rectangular slabs of the tomb lids, various writings and geometric designs of different types have been found.
Each of the sarcophagi features perfect and incredible carvings, created thanks to machines equipped with indisputable technology.
They are strategically located in each of them.
Could it be that each sarcophagus had a different purpose than everything else?
Some Dowsing experts who were visiting these giant sarcophagi, perceived from these black boxes or tanks as if they were places for ascension, that is, real Stargates to go to other dimensions or be reincarnated on other planets. And to think that all of this happened more than 30,000 years ago