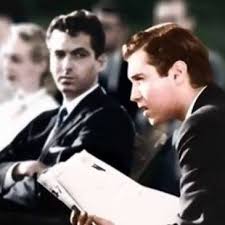 Valiant Thor, an off-world visitor who came to Earth, helds a higher perspectives of humanity. Unlike many other extraterrestrials visiting our planet, Valiant Thor was very photogenic and not camera shy. It was what he had to offer that truly intrigued government officials who invited him to stay.


Valiant Thor is an immortal who resides inside the planet Venus. He is the commander of Victor One, a spaceship presently stationed on the ground near Lake Mead, Nevada, and he heads the Council of Twelve in Venus.

In March of 1957 Valiant Thor landed in a small craft in Alexandria, Virginia and subsequently met with President Dwight D. Eisenhower, Vice-President Richard Nixon and Chiefs of Staff. The Commander was offered a three-year furnished apartment at the Pentagon.

The purpose of Valiant Thor’s visit was to help the earth’s family to lead lives based on spiritual principles which ensure wholesome progress in all fields of endeavour including health, economics, scientific and technological advancement, justice, education and governance. Although his aid was refused by the American government, to this day Valiant Thor and his complement continue to give assistance to the people of Earth.

In December 1959 Dr. Stranges met Commander Valiant Thor and they enjoyed a fine friendship until Dr. Stranges’ passing in November 2008.

Details of this encounter can be found in Dr. Frank E. Stranges’ book Stranger at the Pentagon.

A short film entitled Stranger at the Pentagon has recently been made.

Very interesting and it’s a shame we didn’t let them help us and even worse humanity had no idea of these events. Hopefully Commander Valiant Thor is still around and give us a second chance. Well I have been thinking about this and ok they came here at the wrong time and presented themselves to the wrong people at a time of ignorance on our Political leaders and Humanity but we have grown and we understand our Political leaders really are not representing us as a hole in the need of Humanity to evolve and and place us in a Galactic Confederation in the Universe , We are not even sure how they get elected. We are slaves to our system here on this Planet Earth and we need your assistance We Humanity are asking for your Help Love and Guidance Nancy Thames