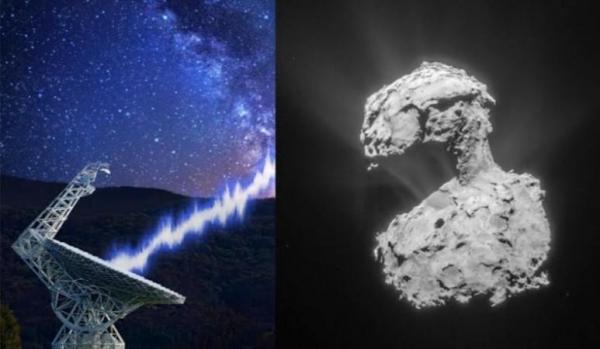 The UFO researcher claimed that aliens are sending messages to Earth using Comet P67 in the Kuiper belt.

Comet P67 is one of the weirdest objects in the Kuiper belt, and in 2014, the Rosetta mission created history by collecting dust samples from its surface. Interestingly, there were loads of organic compounds in the comet’s dust, and it made many people believe that the space body might be holding secrets of alien life.

Now, the mysterious comet has once again started ruling the headlines after Scott C Waring, a popular UFO researcher operating from Taiwan, spilled the beans about the mysterious sound it transmits. In a recent post on his website, ET Data Base, Waring outlandishly claimed that this noise from Comet P67 is actually alien messages sent to Earth.

“It makes a radio signal that sounds like a message. Its radio signal has gone non-stop since discovery over 25 years ago. 20 years ago when scientist heard comet P67, they decided to build and launch a satellite to investigate it. The satellite finally reached the comet several years ago and recorded this signal from the comet…now called the singing comet. So, this is a message that aliens created and placed on the comet to either mark their territory or to test species at a certain level of development to come and investigate. I think its the first,” wrote Waring on his website.

The UFO researcher also added that the comet itself has the shape of an alien head with a weird neck and shoulders.

Scott C Waring later uploaded a video about the mysterious noise rendered by Comet P67 on his YouTube channel where it received positive responses from his followers.

“Sounds like an enter the galactical hit really it sounds amazing this is really cool and all seriousness thanks for slowing it down,” commented Supernat is here, another YouTuber.

As alien debate continue ruling the internet, a few days back, Dr Young-hae Chi, a Korean lecturer who teaches at the Oxford Oriental Institute had sensationally claimed that extraterrestrials are currently interbreeding with humans on Earth. As per Young-hae Chi, these hybrids from mixed parentage are capable of surviving climate change, and in the course of time, they will emerge as the most dominant species on the planet.