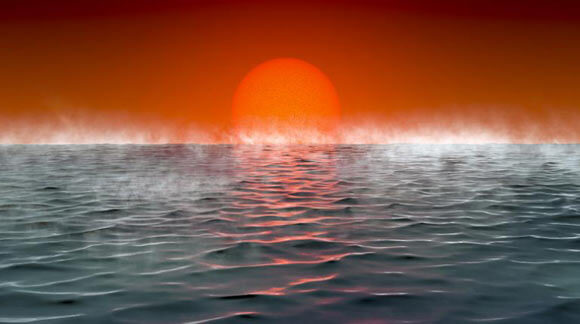 Hycean worlds are composed of water-rich interiors with massive oceans underlying hydrogen-rich atmospheres; with densities between those of rocky super-Earths and larger mini-Neptunes, these exoplanets can be optimal candidates in the search for exoplanetary habitability and may be abundant in the exoplanet population.

Of the thousands of exoplanets known today, the vast majority are low-mass planets with sizes of 1-4 Earth masses, between the terrestrial planets and ice giants of our Solar System.

With no analogs in the Solar System, these planets are variedly classed as super-Earths or mini-Neptunes depending on inferences about their bulk compositions based on their densities.

Earlier studies of such planets have found that the pressure and temperature beneath their hydrogen-rich atmospheres would be too high to support life.

However, Dr. Nikku Madhusudhan, an astronomer in the Institute of Astronomy at the University of Cambridge, and colleagues recently found that in certain conditions these planets could support life.

The result led to a detailed investigation into the full range of planetary and stellar properties for which these conditions are possible, which known exoplanets may satisfy those conditions, and whether their biosignatures may be observable.

The investigation led the astronomers to identify a new class of planets, Hycean planets, with massive planet-wide oceans beneath hydrogen-rich atmospheres.

These planets can be up to 2.6 times larger than Earth and have atmospheric temperatures up to nearly 200 degrees Celsius, but their oceanic conditions could be similar to those conducive for microbial life in Earth’s oceans.

Hycean worlds are likely quite common, meaning that the most promising places to look for life elsewhere in our Galaxy may have been hiding in plain sight.

However, size alone is not enough to confirm whether a planet is Hycean: other aspects such as mass, temperature and atmospheric properties are required for confirmation.

“Essentially, when we’ve been looking for various molecular biosignatures, we have been focusing on planets similar to Earth, which is a reasonable place to start.”

“It’s exciting that habitable conditions could exist on planets so different from Earth,” said Dr. Anjali Piette, also from the Institute of Astronomy at the University of Cambridge.

The researchers found that a number of trace terrestrial biomarkers expected to be present in Hycean atmospheres would be readily detectable with spectroscopic observations in the near future.

They also identified a sizeable sample of potential Hycean worlds which are prime candidates for detailed study with next-generation telescopes.

These planets all orbit red dwarf stars between 35 and 150 light-years away.

Planned observations of the most promising candidate, K2-18b, with the future James Webb Space Telescope could lead to the detection of one or more biosignature molecules.

“A biosignature detection would transform our understanding of life in the Universe,” Dr. Madhusudhan said.

“We need to be open about where we expect to find life and what form that life could take, as nature continues to surprise us in often unimaginable ways.”