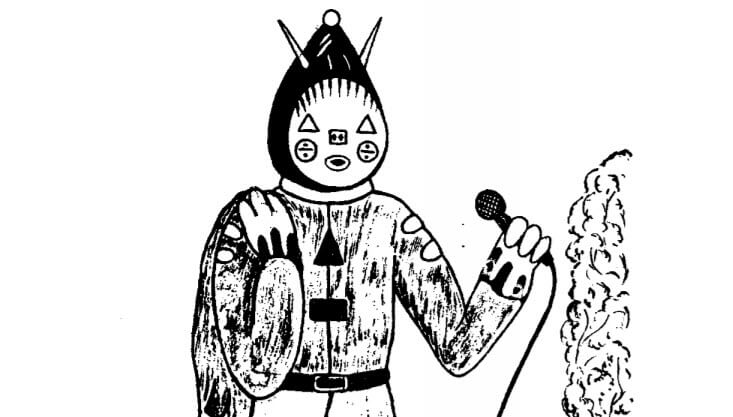 On May 1973 two children at the age of seven in the UK had a weird close encounter with an out-of-this world humanoid being. The being described is difficult to classify. Was it an alien; a type of robot; a biological robot; an elf or something in between? On an afternoon around 4pm the two children (boy and girl) were at Lake Common, Sandown (Isle of Wight, UK). While walking around a golf course they heard a noise similar to a ambulance siren.  They followed it across the golf course and through a hedge leading to a swampy field adjacent to Sandown Airport. The noise stopped.

Then, while crossing a footbridge over a stream they first saw a blue gloved hand appear below them and a strange person emerged. This humanoid was holding a book that he mistakenly dropped into the shallow water and proceeded to retrieve it. Then the humanoid walked a few meters away with a strange hoping motion and entered a small metallic hut similar to those used in construction sites but without windows.

As the children were leaving the area the humanoid reappeared at a distance of approximately 50 meters, this time holding a microphone. The siren-like noise started again and the children got frightened. When the sound stopped, the being spoke into the microphone. With perfect clarity as if the being was next to them they children heard the being ask: “Are you still here?”. The being´s friendly tone convinced the children that he was not a threat and they approached him.

The humanoid was over 2 meters tall and had no neck; the children could only see a head and the shoulders. He wore a yellow, pointed hat, which was somehow interlocked with the red collar of a green tunic. The top of his hat had a black knob, and on both sides he had what appeared to be like wooden antennas. His face had triangles for eyes a brown square for a nose and motionless yellow lips. His face was white and had  circular markings on his cheeks, also, a fringe of red hair fell on his forehead. Wooden slats protruded from his sleeves and white trousers.

The being picked up a notebook and wrote: “Hello and I am all colors, Sam”. The words were pointed out to the girl as they were not written in a conventional sequence. As the children approached they discovered that the humanoid could be heard without the aid of the microphone. His mouth was motionless and his speech was unclear. The children started to feel comfortable and started to ask questions. They asked him about his clothes which were all ripped and he said that they were the only clothes he could wear. Because of his strange features and paper white skin the children asked him if he was really human; he chuckled and said “no”.  Then they asked  if he was a ghost. He vaguely replied “WelI, not really, but I am in an odd sort of way”. “What are you then ?” they insisted. The being only said “You Know” with no further explanation. The humanoid also said he had no name, that there were others like him.   He also confessed that he was frightened of people and scared that they might hurt him as if attacked he would not fight back.

The being invited the children into his hut. The children crawled into the hut  through a flap. The hut was divided into two levels. The lower level had a blue-green wallpaper and covered with a pattern of dials. Also, it had an electric heater and some basic wooden furniture. The upper level was less spacious and had a metallic floor. He told them that he fed on berries that he collected in the late afternoon without indicating where but indicated that he had a camp or a base in the mainland he could go (the incident tool place on the isle of Wight in the south of England). As far as drinking is concerned he drunk water from the nearby river once he had cleaned it.

While inside the hut, the humanoid took of his hat to reveal a pair of round white ears and sparse brown hair. Next the being did something strange. According to the children´s testimony he placed a berry in his ear, he then thrusted forward his head causing the berry to disappear and reappear at one of his triangular eyes. After repeating the head movement the berry reached his mouth. Was the being a type of biological robot that used this process to verify the quality of the berry? Who knows? The children also noticed another important detail; the being had clearly only 3 fingers on each blue-gloved hand and three toes on his bear white feet.

The children talked to the being for about half an hour and after saying goodbye they rushed out to tell the first person that they had seen the ghost. The man they spoke to just laughed assuming it was all just made up. Most probably lacking any other reference to their experience the children labeled the being as a ghost.

A few weeks later, the girl (Fay) told her father of her experience. At first he did not pay too much attention but started to be convinced due to the extraordinary level of detail of the account. The boy also supported the girls description of the incident. Where the children temporarily taken to another dimension? Well, two workmen who were repairing a post nearby did not notice a thing.