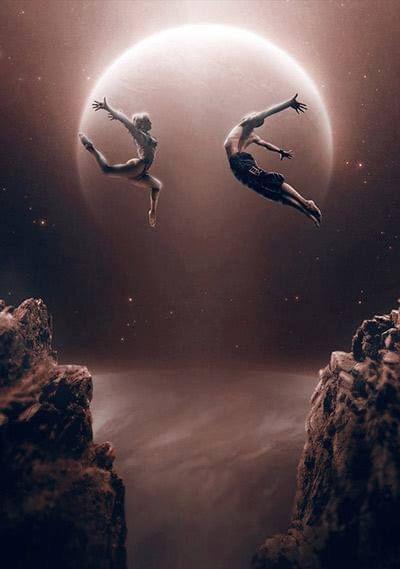 Dear brothers of the planet Earth! I am ASHTAR SHERAN!
I come here today to bring you good news. There is nothing to worry about anymore, the weapons have all been destroyed. So now we will begin a new phase, the phase of the liberation of the surface. Actually, this phase has already started a long time ago. We have not been standing still waiting for the internal process to finish before coming to the surface. Many actions have already been taken on the surface of your planet, however, the great thinking minds and major representatives of those who dominated them, are still around the planet. And the process of simply removing them from power, is not an easy and simple process, because it is like a cartoon where we take them out and they put them back in.

So many of the people that you see today are no longer the real people, they are clones of the people who once played that role. So ending this whole farce is the big goal now. To end the lies, to end the control, so that we can actually start the process of Ascension. But not the actual ascension, of you migrating to the Fifth Dimension. There is still much to be done, there will still be many changes on your planet, for the event to actually happen.

The Light comes stronger and stronger, and with it, the changes; with it, the actions. So as we have asked here, in unison, together with the same voice, is that you be prepared. Today you shout all the time that the world is in chaos. You don’t know what chaos is, you have no idea what will happen. But at no time do we say that here for panic or despair; we just don’t want you to be taken by surprise.

You have come a long way, and even the newest arrivals already have the necessary understanding for what is to come. I can tell you that each one of you will go through tests and profound tests in order for you to effectively recognize yourselves as aspirants to the Fifth Dimension. So no judgment, no anger, no inciting others against this or that, because you will only be adding to the chaos, to the imbalance. Just walk away from it all. It is as if you have entered a time capsule; comfortable, with everything you need, and no matter how much you hear the noises, the comments, the screams, the despair, the doubts of the attacks from the outside, you will feel nothing.

Because we hope that you have already learned not to suffer the suffering of others, and understand that you are all reaping the fruit of your own decisions, of your own life’s journey, of your soul’s choices, of the resistance to see that there is something beyond the horizon. Many want to continue believing that the world is only what they know and do not want to broaden their vision, because for them it is comfortable and safe to believe only in that. And when they are forced to see beyond, and simply discover that they could have taken a step beyond long ago and didn’t, the revolt will be great, because they will realize that they have wasted part of their lives believing in lies, believing in interests, not in truth.

To be a lightworker, to be a starseed, no matter what label you want to put on yourself, I prefer to call all of you aspirants to the Fifth Dimension; because you are all in training, day by day, with harsh lessons, hard exercises, but you are walking, passing obstacle by obstacle. Many of you can’t take it, you ask to stop, because the exercises are too intense. We respect this, but we only warn them not to rest for too long, because it is just like a soldier, who by practicing continuous exercises, his muscles, his cells, become strong and powerful.

But if he stops, and then continues, his cells also stop. And that whole mechanism of action, of courage, of struggle, falls asleep, and the new walk will be a little more difficult until it picks up the rhythm again. So you can rest for a little while, so that your cells continue in that rhythm of struggle, of victory, of seeking the truth, whether it is hard or not. Many of you think it’s “cute, it’s fashionable” to say you are a lightworker. So, I tell you this; when you say that, the Universe puts you on that track, as a lightworker. So if you don’t want to follow that path, you find it too heavy, then affirm that you are not a lightworker; and all that will be removed from your path.

Now, affirm just to fill the ego, then accept the consequences of your affirmation.

We are not playing games here; we are not pretending. Each one of you, who calls yourself a Lightworker, is given a mission to be a pillar of light and keep the energy of the planet anchored. But to do that, you need to be clean and fully involved with the whole process towards the Fifth Dimension. So don’t play with serious stuff. If you don’t want to follow the path because it’s too hard, too brutal, too painful, ask to leave; tell them you are not a lightworker, and all training will be stopped. Now, that road to the 5th Dimension, you will no longer take it, you will take another road that also leads to the 5th Dimension, but it will be the road of those who come after; a much more difficult road, much more demanding, not in training, but in change, in attitudes and in tasks.

So make the choice that you want, we don’t force anybody to do anything, but we assume that you all want to go to the Fifth Dimension. So there is also an alternative, if you feel you don’t want to be on one road, or the other, say, “I don’t want to go to the Fifth Dimension”, then your life will continue exactly as it has always been, and you will be taken off both roads and you will continue to be prepared to leave the planet.

Realize that everything is choice, we don’t force anyone to do anything. Make the choice you want. There are three alternatives; there are no more, just these three. Choose one to follow, because from now on, more than ever, all the training that you have been undergoing will cause you to go into action automatically. And don’t see this as taking up arms, or fighting physically. The training is about staying balanced, not getting involved with your surroundings, and being totally open-hearted, to whomever comes, whoever it is.

Which training do you want to participate in? Make the choice. We don’t force any of you to do anything. Now, decision made, endure the training, because it will get more intense every day. Many people think: “Oh, you talk about training, and I don’t feel or see anything. You are all being trained, but for secret of war, you don’t remember anything. But all of you every night are being trained deeply. Some of you remember, you have flashes that you were somewhere battling against something. Others remember nothing and think nothing is happening.

Then I say to you: That you are all trained daily, at night, by your Masters. At the right time, you will remember all the training. It would be unproductive, you being trained for so long and at the “h” time, not remembering anything. Then, when the time is right, you will remember, and you will be able to put into practice everything you have learned, effectively. Didn’t you want excitement? Then you will have excitement. Those who have the warrior soul are impatient, because their souls want to begin the battle, and so it will be. And once again, I repeat: Nobody here is talking about a physical battle, or a battle against dark beings. The battle is in the heart, the battle is with the feelings, the battle is against everything that will come against you. And it will be the big test, where you will show that you are ready, or not, for the Fifth Dimension, depending on your reaction.

So, you didn’t want to participate? Then be ready, because you will be there. So, again I say, who thinks he is not ready, say, “I am not a lightworker, but I want to go to the Fifth Dimension” – Very well, you will be taken to another road, which is not easier than this one, but you won’t have as much responsibility. “No, I don’t want to go to the Fifth Dimension, I don’t want any of that.

Then ask to stay, with those who want to go to the Third Dimension.
These are the choices, there are no others. Affirm for each higher self, of each of you, what you want and what you are. This needs to be affirmed, said, from the heart. Then, just affirm to the higher self the choice that you are making. No, the choice cannot be made tomorrow, later, next month, next year. It has to be made today. There is no more time to wait. So make the choice, tell the higher self what you are and what you want. It is very simple, there is not much to think about. Now, again I remind you: A statement made, it will be fulfilled at any cost to you.

Soldiers who enlist of their own free will, will hardly ever leave this army afterwards, and will remain in this army until the end, because I guarantee you: that despite all the hardness, all the difficulties, all that you will go through, in the end it will have been worth it. Because the feeling of duty done, for your own soul and for so many other souls that will be guided by you, will be immense, will be without size, will be an infinite gratitude, for a job well done, from the heart, and most importantly, of pure Unconditional Love.

We are waiting, make your choices. It’s not tomorrow, it’s today. Tell your Higher Self what you want, for the troops are being formed. And the battle of Unconditional Love, against every other negative feeling, has begun. But it needs many, many soldiers, to make it actually happen, on planet Earth.

1 thought on “Ashtar: Affirm To The Higher Self Your Choice”