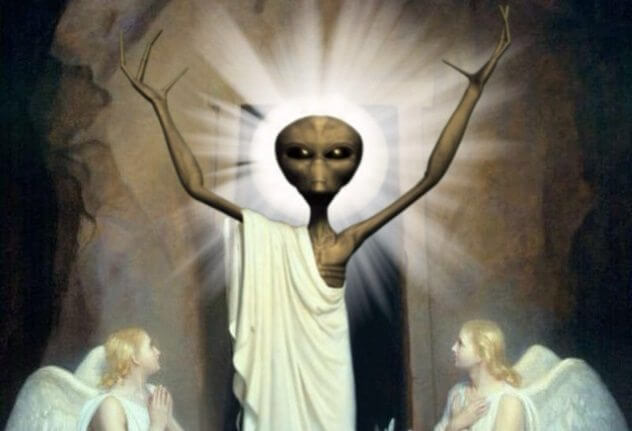 OR IS IT ALL A PROJECTED HOLOGRAM?

It doesn’t matter really matter – the truth is “out there” somewhere regardless of if you are a “true believer” in all things spiritual and religious, an infrequent churchgoer, or even a full-fledged atheist.

If you are reading this, you may be wondering what could be the connection between UFOs, the Scriptures and the Signs, Symbols and Wonders of Biblical proportions that appear to be manifesting all over the world in what many see as “very troubled times.”

Are we to accept at face value the phantasmagorical stories told by those who claim to have been “taken up” (to where, one wonders?) – such as Whitley Strieber, Betty Andreasson Luca, and contactees like Orfeo Angelucci and George Van Tassel?

In a new book just out, as one of the authors, I ask, is a genuine religious experience the kind of thing that can be expressed in human language at all, or to a degree that a fellow individual, regardless of his religious persuasion can fully – or even halfway – understand it? And do the supernatural elements of UFOs and alien encounters constitute authentic contact with God or possibly His angelic messengers?

What is the difference between claiming to have seen religious miracles and simple, garden-variety madness? Is one a witness to the divine or a simple victim of mental disturbance?

Those are among the many questions grappled with in a recent offering from Tim Beckley’s Inner Light Publications. The complete title is “Sean Casteel’s UFOs, Armageddon, and Biblical Revelations: Signs, Symbols and “Wonders” – The Whole Truth.” Beckley has placed my name at the very top, but I can assure you that it is purely in an honorary sense, given the fact that there are nearly ten other contributors, including Beckley himself.

The book is the product of many years of experiences with and research into the paranormal, most specifically UFOs, their alien occupants and the often religious-spiritual overtones to contact between the aliens and ourselves. As some of the contributors to this book believe, the nature of genuine religious experience and encounters with extraterrestrials may be inseparable, may in fact be one and the same though called by different names and seen in vastly different contexts.

None of which is new, of course. From its very beginnings in the mid-20th century, the UFOs (at times dubbed “flying saucers”) of the modern era have been compared to angelic appearances in the Bible and seen as the driving force responsible for miracles attributed to all faiths throughout recorded history. What we have attempted to do here is to offer a survey of the religious implications of UFOs and the countless varied forms those phenomena take when they manifest in our all-too-limited physical dimension.

Along with some fresh approaches to the familiar ancient alien accounts, we have also provided an overview of Marian visions, which are much more frequent and well-documented than you may have realized. UFOs sightings in modern-day Israel are also included, as well as an analysis of why sightings in the Holy Land are so important to the entire world.

In an effort to be fair, the demonic take on the UFO phenomenon is the subject of a Q and A with prolific British author Nick Redfern, who believes there is a secret government group searching for ways to do battle with the demons bedeviling the U.S.

The religious and prophetic implications of UFOs and other forms of the paranormal are complicated, and we have provided no easy answers here. Is it even possible that there is only one single, perfect way of understanding? I think I can safely say, along with all the contributors to this book, that the answer to that question is a resounding, tantalizing, frustrating “No.”

Beckley provides some historical background on the subject of Marian apparitions, or appearances by “Mother Mary” down through the ages.

“She goes by various names in various cultures,” Beckley begins. “She is known as ‘The Woman of the Apocalypse’ or the ‘Lady of the Sun.’ (Rev 12:1-6) The apparition of a beautiful woman adorned in white is first thought to have been seen in a series of visions early in the Twentieth Century, and we have come to associate her with three shepherd children and the town of Fatima, Portugal. But the truth is ‘she’ has been appearing throughout history. In fact, the Book of Revelation identifies her in prophetic terms as being in association with a ‘great red dragon, with seven heads and ten horns.’ In Biblical days, as now, visions of this lady are often a precursor to an ‘act of God’ and eventually to the end of all time, the destruction of humanity by godless forces who will roam the Earth.”

The verses from Revelation that Beckley refers to are these: “And a great sign appeared in heaven: a woman clothed with the sun, with the moon under her feet, and on her head a crown of twelve stars. She was pregnant and was crying out in birth pains and the agony of giving birth. And another sign appeared in heaven: behold, a great red dragon, with seven heads and ten horns, and on his heads seven diadems. His tail swept down a third of the stars of heaven and cast them to the Earth. And the dragon stood before the woman who was about to give birth, so that when she bore her child he might devour it. She gave birth to a male child, one who is to rule all the nations with a rod of iron, but her child was caught up to God and to his throne, and the woman fled into the wilderness, where she has a place prepared by God, in which she is to be nourished for 1,260 days.” (Rev 12:1-6)

WHAT AND WHERE IS FATIMA?

Beckley then shifts his attention from an ancient era to times closer to our own.

He writes: “Fatima is a small city in central Portugal where the landscape is dry and rocky. For centuries, people made their living there raising sheep and other animals. In May 1917, three shepherd children — two girls and a boy — claimed they saw an apparition of the Virgin Mary. The children described Mary as “a lady dressed all in white, more brilliant than the sun.” Mary told the children that praying the rosary would end what was then called The Great War — World War I — which left 17 million dead.

“According to the children,” Beckley continues, “Mary appeared to them six times that year. In one appearance, Mary said a miracle would occur on Oct. 13, 1917. Initially the children were scolded and even threatened with death for spreading what were considered baseless stories. But pilgrims from all over the world gathered in Fatima on that date and awaited Mary’s appearance. In what came to be called the ‘Miracle of the Sun,’ many reported seeing visions in the sky while others reported miracles of healing.  A newspaper of the day reported: ‘Before their dazzled eyes, the sun trembled, the sun made unusual and brusque movements, defying all the laws of the cosmos, and, according to the typical expression of the peasants, “the sun danced.”

After much contemplation, in 1930, the Catholic Church declared the events at Fatima “worthy of belief,” and chapels, sanctuaries, shrines and other memorials to the events popped up.

WHY HAS FATIMA BECOME SUCH AN ATTRACTION?

When the church declared the Fatima apparitions worthy of acceptance, it is said pilgrims who travel there could obtain a special blessing as well as pray for healing and spiritual guidance. Today it is one of the most popular shrines in the world. The largest numbers come dutifully on May 13 — the anniversary of the first apparitions.

What is not well known is that Marian apparitions, as they have become popularly known, are not just historical events of monumental proportions, but a growing phenomenon that has swept the world during the course of the decades since the three young shepherds bore witness to this series of ongoing events. Their experience pitted them and those who held fast in their beliefs against a rigid communist dictatorship who had officially declared themselves an atheistic state.

Truly, there can be little doubt in anyone’s mind upon reading through the maze of available literature that something utterly profound happened at Fatima, Portugal, on October 13th, 1917, when thousands gathered for a miracle which had been promised by three local children. Peering up into the dark, cloud-filled sky, the throng witnessed a spectacle that has deservedly gone down in history as one of the greatest spiritual events of modern times.

Even the most religiously conservative of the flock can see the obvious connection between the apparitions at Fatima, combined with the anomalous spinning “sun,” as having a likely relation to the appearance of UFOs, “spacemen” and “spacewomen” and other paranormal occurrences.

It is now an established fact that sightings and interactions with the Lady have come from all over the world and from individuals of all faiths and backgrounds. The Holy Mother has been seen in virtually every country in the world, regardless of that nation’s religious or political beliefs. Apparently, she appears before us not to make converts, but to awaken us to the fact that time may be running out.