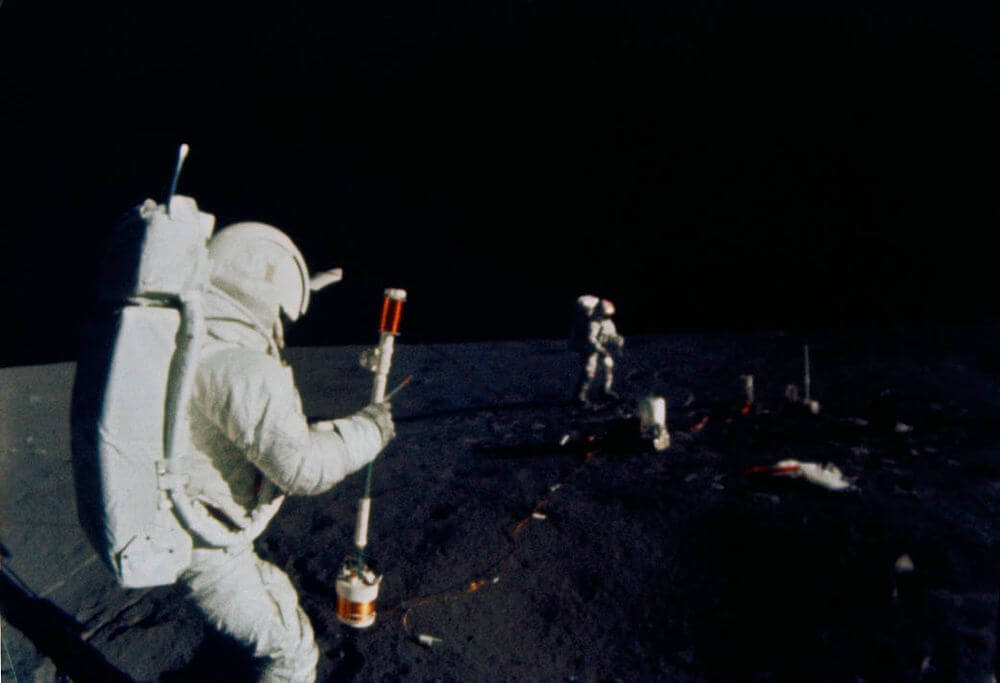 The Apollo missions of the 1960s and 70s provided scientists with an exciting playground upon which to conduct experiments never performed in the history of humankind. They collected samples of rocks and soil, measured seismic data, took measurements of the lunar atmosphere and lunar crust. The high vantage point allowed astronauts to take photographs of celestial objects in spectral bands not seen from Earth. They played golf, drove a rover, conducted Galileo’s famous hammer and feather experiment, and even lobbed grenades. 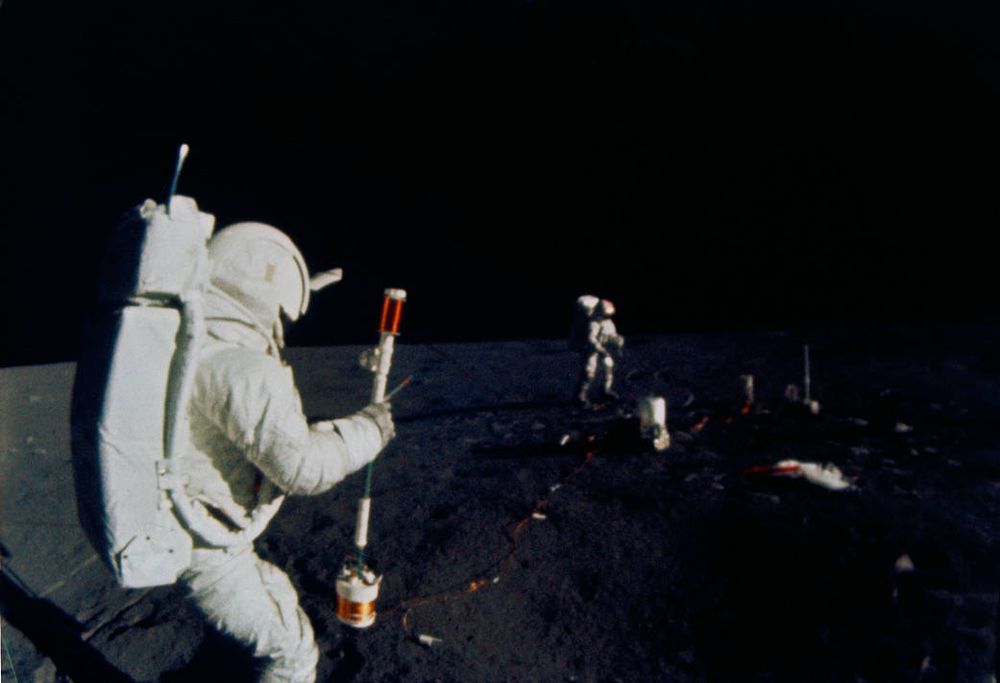 The grenade throwing was part of a more serious endeavor called the Active Seismic Experiment. Carried on Apollo 14 and Apollo 16, the seismic experiments were performed to determine the structure of the upper kilometer of the lunar crust. The experiments involved detonating a series of small explosives on the lunar surface and measuring the way the seismic waves traveled across and through the ground. Any seismic activity generated by quakes and explosions produces a bunch of different waves. Some of these waves can travel through solid rock, but not through liquid. Studying seismic waves generated on earth by earthquakes allowed scientists to deduce that the earth has a solid inner core and a liquid outer core. The purpose of the Active Seismic Experiment was to apply the same principles to determine the nature of the moon’s crust.

Because the moon is seismically very quiet it was necessary to generate artificial “moonquakes”. That’s where the grenades come in. The astronauts carried a thumper device containing nearly two dozen small explosives and a mortar package capable of launching grenades up to 1.5 km away. The thumper device created a small shock and was activated by the astronauts, but the mortar was launched by command from Earth. The mortar produced stronger waves that allowed scientist to look deeper into the lunar crust. A series of geophones laid out in a line detected the seismic waves generated. 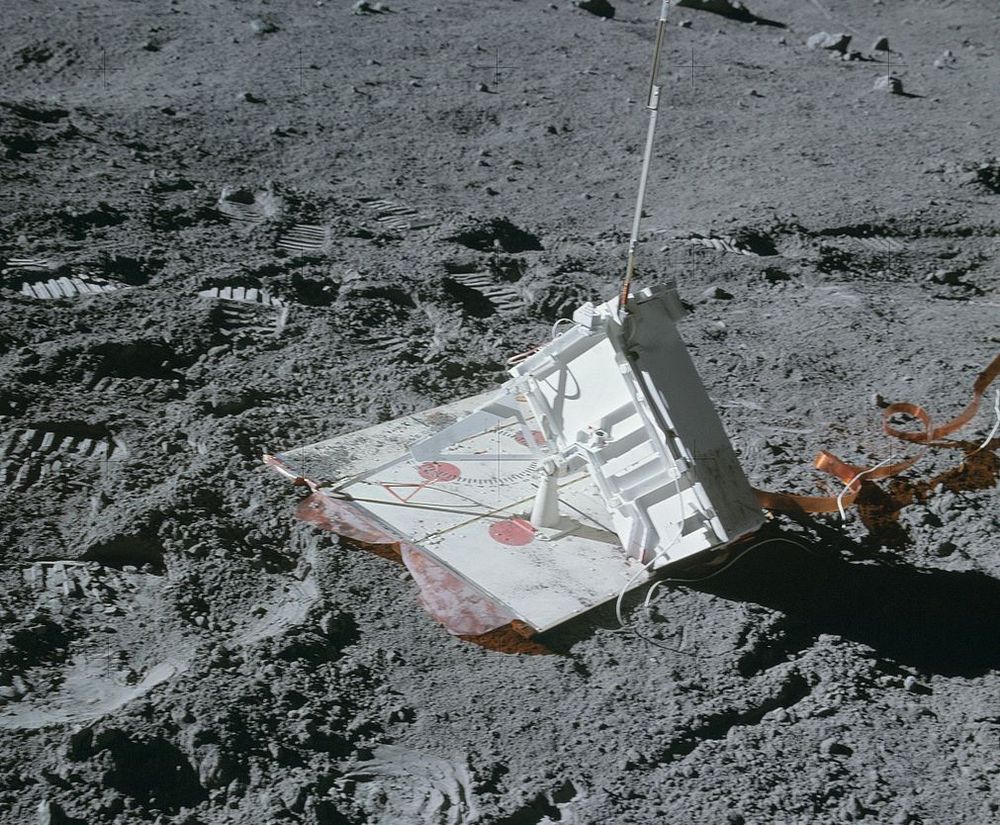 During Apollo 14, the astronauts managed to fire thirteen of the twenty-two thumper charges successfully. The failure of the rest were attributed to accumulation of dirt on the firing switch actuator bearing surface. The mortars were not fired because it was determined that firing them would have caused damage to other equipment. Instead, an attempt was made to fire the mortars after the astronauts had left the moon, but by then the firing charges failed to work. These grenades still remain unfired on the moon. Each contain between 45 to 450 grams of hexanitrostilbene, a heat-resistant high explosive.

By Apollo 16, the NASA had readied an improved mortar. This time they were fired up to a distance of 900 meters. After three of the explosives were fired successfully, the pitch sensor went off scale, so the last remaining mortar was not fired. It too remains on the moon. Of the 22 thumper charges, 19 were successfully fired. 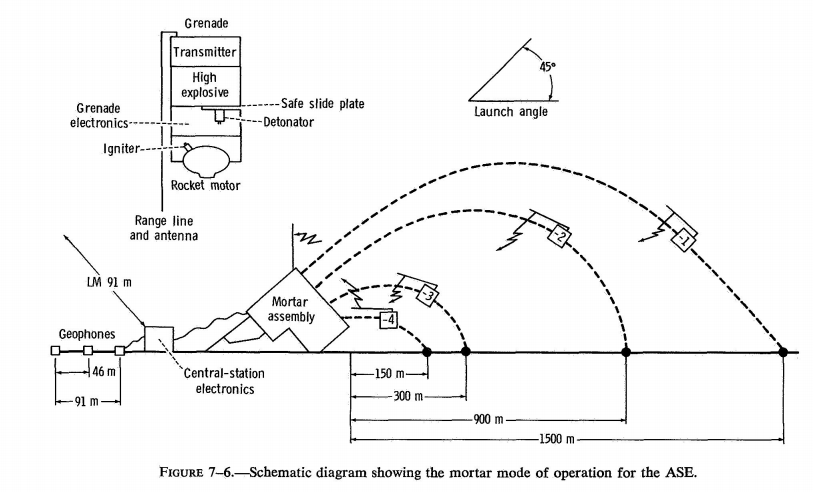 Seismic experiments continued on Apollo 17, where a simpler system was used. Instead of radio controlled triggers, the astronauts placed the charges about 3.5 km from the lander, pulled the pins and set off a thermal timer before leaving the moon. It was the largest seismic experiment conducted on the lunar surface using explosive charges up to 2.7 kg in mass. From this experiment, it was discovered the basalt layer at the surface near the landing site was 1.4 kilometers thick.

These seismic experiments showed that the seismic velocity in the upper few hundred meters of the crust is much lower than those observed for intact rock on Earth, indicating that the lunar crust is highly fractured resulting from prolonged meteoritic bombardment of the Moon. 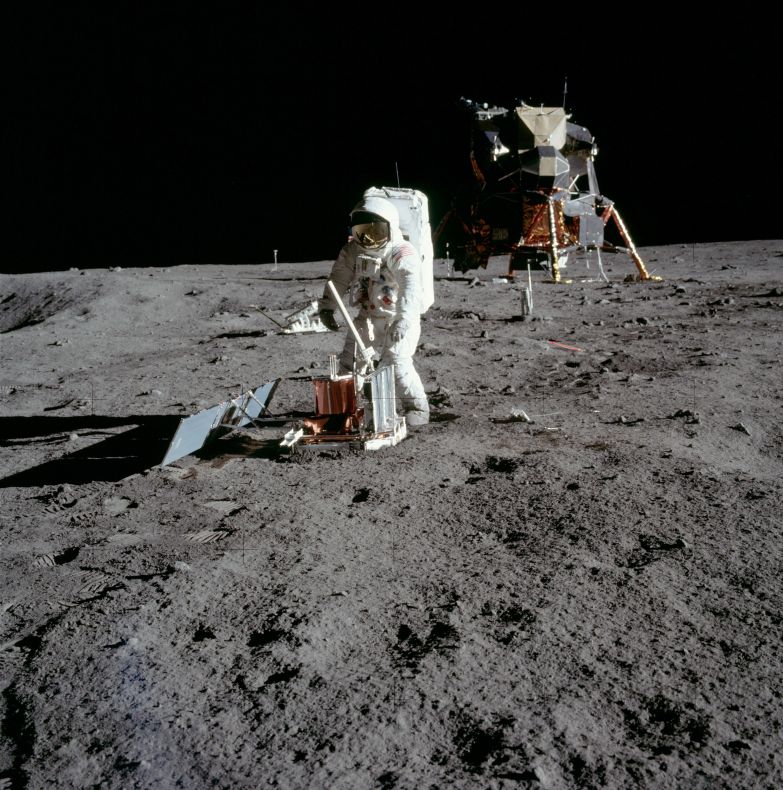 Buzz Aldrin deploys a seismometer in the Sea of Tranquillity. Photo: NASA

The sensors placed on the lunar surface provided data for years after the Apollo missions were over. It was discovered that like earthquakes, moon also experience quakes, generated by meteorite impacts and thermal expansion of rocks. Recent research have shown that the lunar surface is also littered with geological faults, called fault scarps, which are responsible for shallow moonquakes that the Apollo-era sensors detected but remained unsolved until about a decade ago when images captured by the Lunar Reconnaissance Orbiter revealed thousands of fault scarps all over the lunar surface.

The data collected by the Apollo lunar seismograms are being studied to this date, and as new theories develop it has helped improve our understanding of the structure of the deep lunar interior, including the existence of a solid inner-core and sharp core-mantle boundary and a partial-melt layer at the base of the lunar mantle.