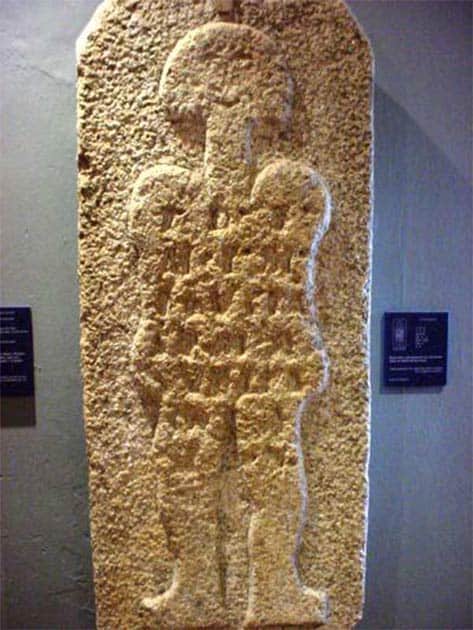 Some of the ancient paintings and artifacts are the finest examples that hint at the human encounter with the otherworldly beings in the distant past. There is a strange figure embedded in the walls of the Southern part of the cemetery, situated near the village of Casar in Spain. The ancient stone is now displayed at the Archaeological Museum of Cáceres. There are certain bizarre stories about the origin of the stele but the mystery remains unsolved.

The ancient stone consists of a carving that resembles a human figure with an unnerving smile, bulbous shoulders, and an oversized head. Due to its humanoid appearance with helmet and spacesuit, the artifact is dubbed as “Astronaut of Casar” or “Alien of Casar.”

There is a strange inscription in the Latin letters on the ancient stone slab that corresponds with the Indo-European language used by the indigenous peoples of the region. Many researchers consider it to be untranslatable. Though it has not been deciphered yet, there are several stories that astonished many people.

Origin of Astronaut of Casar

There is no conclusive proof about the origin of the Casar stele but some researchers suggested that the image carved on the ancient stone could be of a Celtiberian warrior made in the 2nd or 1st century BC. Besides, the inscription on the stone is believed to be written during Roman times. There is an argument about the language used in the inscription. During the time of Roman period in Spain, several languages were used such as Celtiberian, Lusitanian, Tartessian, proto-Basque, Latin, etc. Still, researchers have no clue which language it could be, but among them only Celtiberian, Lusitanian, Tartessian, and proto-Basque were used by natives.

One theory suggests that the figure carved on the stone could be an ancient astronaut. The bulging shoulders and oddly shaped head depict that the humanoid figure is in some sort of spacesuit. What’s more, the oversized head resembles the modern depiction of big-headed aliens. Some people argue that this could be a sentiment of gratitude by an alien being who was forced to spend a season on our planet and was welcomed by a family of that time. In other words, it was suggested that this enigmatic carving in Cáceres is nothing less than the first documented proof of extraterrestrial life on Earth.

Some experts gave an explanation about the bizarre-looking figure in the stele. They believe that the misshapen appearance of the head could occur due to the time and weather conditions. The figure seems to look like an extraterrestrial due to various ancient alien theories. Undoubtedly, there are some spectacular ancient artifacts that support the ancient alien theory.

A 3000-year-old spaceship-looking artifact is one of the most famous vehicles that supposedly proves the fact of the ancient aliens’ arrival on Earth. Zecharia Sitchin was the first person that drew attention to it, having discovered the artifact in Turkey in 1973. This mysterious stone artifact incredibly resembles a rocket with modern engines, in which a man is shown sitting in a spacesuit. This could be one reason why some people believe that the Astronaut of Casar has extraterrestrial links.

There are several ancient texts, suggesting that ancient civilizations (Sumerians, Egyptians, Asians, etc) developed spacecraft and traveled to outer space. Ancient Vimana theories suggest that beings from another world traveled to Earth and provided humans with the knowledge of levitation, anti-gravity, and interstellar spaceships. Additionally, in 2016, Iraqi Transport Minister Kazim Finjan made a sensational statement during his business trip to Dhi Qar. According to him, the Sumerians had their own spaceport and actively traveled, including outside the solar system.

Archeology, indeed, plays an important role in searching for extraterrestrial intelligence and the uncanny Astronaut of Casar is yet another mystery that needs to be solved, does not matter if it has an alien origin or not.