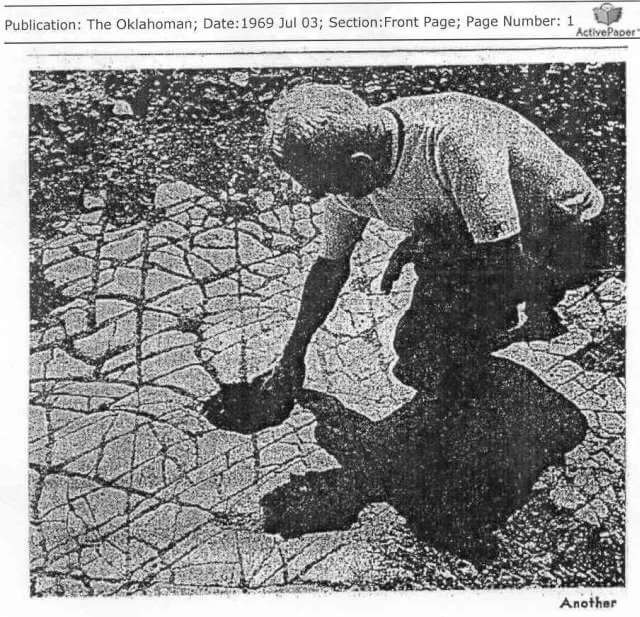 Archaeologists have explained some of the oldest man-made structures that dated 3500-4800 BC. Some believe that Cairn of Barnenez, a Neolithic monument in France is one of the oldest man-made structures on Earth, standing for around 7000 years. There is no exact date when the fully-conscious human species, capable of cognitive skills, appeared on Earth. Ancient astronaut theory suggests that there was an advanced civilization before humans. Many ancient texts and manuscripts hold information about it, but mainstream media define it as a myth.

The most controversial archaeologist discovery till now is believed to be Oklahoma’s Ancient Mosaic Floor. Some speculated that it is the oldest man-made structure that dates back around 200,000 years. Most importantly, the alleged structure is said to be not of a natural formation that existed before the biblical flood. Could Oklahoma’s “Ancient Mosaic Floor” rewrite the history of Earth?

During the expansion of small towns, it is normal to stumble upon the remains of ancient cultures. On June 27, 1969, workers began the construction along the west side of Broadway Extension, north of NW 122nd Street, Oklahoma City, United States. They had dug down around 2.75 feet into the hard surface before hitting an unusual rock formation that was believed to have been build by a lost civilization. Author David A. Farris wrote: “the formation appeared as a massive mosaic floor, comprised of precisely cut stones that had been painstakingly fitted to create a distinct diamond pattern. The smooth stones were also set along perfect, parallel lines, pointing east. No clues were found to indicate which culture had built the foundation, although also discovered at the site was what was thought to be a stone hammer, left behind by a prehistoric craftsman. No items were found that could be tested for carbon- 14, so its age, just like its builders, is undetermined.”

Some speculated that the floor could be 200,000 years old and the foundation consisted of limestones that usually found along the shores of the ocean. Durwood Pate, an Oklahoma City geologist who studied the site told the Daily Oklahoman, noted: “Whether it was man-made or not, we simply don’t know. But considering the vertical cutting of the hammer-like object and the symmetrical design of the diamond-shaped formation, it is improbable that it occurred in nature.”

How did the discovery appear?

The controversial discovery was first reported by “The Oklahoman,” the largest newspaper in Oklahoma on June 28, 1969. The newspaper wrote: “Delbert Smith, president of the Oklahoma Seismograph Co. and past president of the Oklahoma City Geophysical Society, and Durwood Pate, independent petroleum geologist, traveled to the site Friday to study the area and take samples …. ‘I am satisfied that it is not a natural earth formation and that it is man-made,’ Smith said …. Smith and Pate took a core sample to make a microscopic investigation of the material in hopes of deciding what it is.”Another Oklahoma newspaper “Tulsa World” quoted Smith as saying: “There is no question about it. It has been laid there, but I have no idea by whom. Yet another facet of the mystery involved the question of age. There are some differing opinions as to the geology involved, but the best estimate places the tiles at 200,000 years old.”

According to Farris, “Dr. E. W. Haury, from the University of Arizona walk the formation, examining it from different angles and then kneeling down for a closer inspection. The northern outcrop of the curiosity seemed to peak his interest the most. When he was satisfied, the professor finally proclaimed his conclusion to those in attendance, ‘This is a natural formation. There is no apparent trace of man’s influence.’”

Despite this discovery, Oklahoma is a hot bed of bizarre archaeological anomalies. In 1948, Frank J. Kenwood found an iron pot embedded in coal. The coal came from the same area as the wall in the coal mine and silver barrel described above. The coal that the pot came from is estimated to be over 300 million years old.