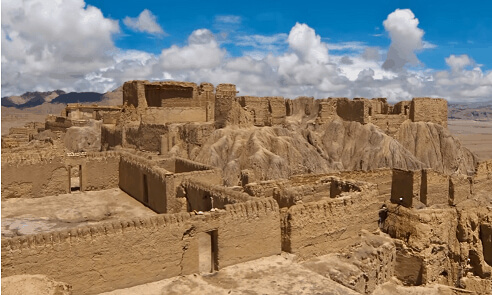 In several ancient texts, there are stories of the underground world and the vast network of underground tunnels spreading around the Earth. There are many firm believers who think there are many entrances to the underworld such as the Pyramid of Giza, Iguaçú Falls, Gobi desert, the Andes, the Himalayas, etc.

Ancient alien theorists have a strong belief that the Himalayan region in Southwest Tibet could have a secret entrance to an underground mythical city known as Shambhala.

According to local legends, Shambhala is a kingdom of gods that exists both in the physical and spiritual plane. There is also a reference to this mythical land in various ancient texts. There is a description of some closely related land known as Tagzig Olmo Lung Ring in the Bön scriptures. Besides, Vishnu Purana, a Hindu sacred text, mentioned Shambhala as the birthplace of Kalki, the tenth and final avatar of the Hindu god Vishnu.

Tibetans believe that the gods’ land is guarded by humans with supernatural powers and was often seen by locals. Tibetan lamas have been searching for Shambhala for centuries. Those who seek for the kingdom have either never returned, found it or died.

The story of two Russian expatriates Nicholas and Helena Roerich is the most fascinating. The couple attempted several times to search Shambhala. At end of 1923, they arrived in Darjeeling, India, intending to find Shambhala.

It all started when Helena Roerich was amazed by Shambhala mentioned as a shortcut to enlightenment by Madame Blavatsky in her book “The Secret Doctrine.” Further, the couple evolved strong desires to visit the mythical land after Helena’s alleged telepathic contact with an otherworldly being “Master Morya.”

During that time, Tibet was closed for foreigners due to rivalries between the USSR and the Britishers, but the Roerichs managed to get permission from Indian authorities to travel from Darjeeling to their destination. But they chose a roundabout route, starting their expedition from Moscow in 1926, and their journey was sponsored by the Soviets.

It was the time when many modern Russian scholars and researchers were looking for Shambhala. What’s more, several governments such as China, Mongolia, Japan, and Great Britain also jumped into this race.

Further, an ancient Mongolian-Tibetan prophecy stated that “The people of the earth would be united under an evil king, who would soon attack Shambhala with fearful weapons. In time, the 32nd ruler of Shambhala would triumph over the bad king, and usher in a new era of peace and harmony.” It worked as an explosive in the political climate.

The Roerichs were the true believers who had no political connection and the only goal to get enlightenment by finding Shambhala. Throughout their expedition, they traveled through rough terrains, deadly weather, faced food scarcity and even spent time in the Tibetan government’s detainment camp where they lost some of their members due to harsh conditions. Still, the Roerichs remained optimistic.

The only source that confirms the Roerichs’ closest encounter with Shambhala is Nicholas’ travel diaries. He wrote that when they were in the Altai mountains of Mongolia, an “Old Believer” showed them the entrance to the subterranean kingdom but it was covered with stones.

Another incident that highlights the presence of Shambhala is the disappearance of the entire population of Guge people. Archeologists were stunned after finding the various tunnels in the city of Guge. Many theorists believe that these underground tunnels could have been a passage to Shambhala, and the Guge people found it and decided to leave the surface. It is estimated that around 100,000 people vanished without any trace.

It is unknown if anyone ever made it to Shambhala, but there are several stories that led to the initiation of expeditions in a search of this mythical place.