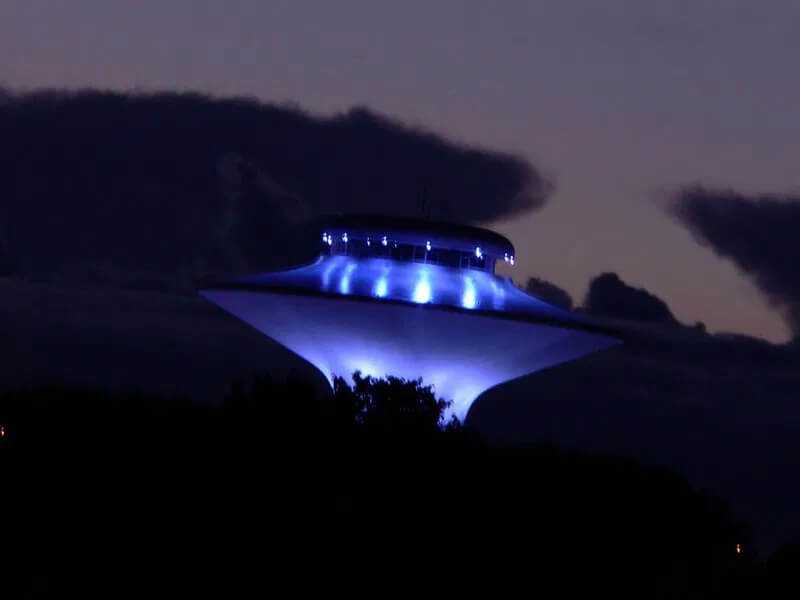 When we think of UFOs, for the most part, we assume they are spaceships that are controlled by aliens, but in reality, this may not be the case. could the UFOs be unmanned?

In fact, there is a strong case to be made that many UFOs do not actually have crews.

Thus, they are remotely controlled, like modern drones, or controlled in some other way. Some of the UFO encounters show, for example, that there are small robots inside them.

One of the most intriguing, but also perplexing, UFO encounters of this kind occurred in Scotland on November 9, 1979, at about 10:39 hours. The Telegraph wrote about it:

“Robert Taylor, a Scottish forestry worker employed by the Livingston Development Corporation, parked his truck at the foot of Dechmont Law and went for a walk up the hill. As he stepped out into a clearing, he said, he bumped into a strange metal sphere about 20 feet across, “like a spaceship, a huge flying dome.” It was made of dark metallic material with a rough texture reminiscent of sandpaper. “

Later, details of this story appeared from BBC journalists:

“Taylor described how the spheres with two spikes rolled towards him and when he began to faint, they grabbed his legs from both sides. Mr. Taylor came to his senses in a disheveled state 20 minutes later. All he could remember was the strong smell of burning. “

When he woke up, the clearing was empty save for the many deep, regular marks on the ground. He approached his van, but was so tense that he could not drive normally on the road and drove the car into a ditch, after which he had to run home “in a daze.” He did not see any aliens in the object.

Consider the following case. On the night of April 21, 1991, the term “close collision” became very important for the crew and passengers of an airliner flying to London, England.

At 21:00, Captain Achille Zaghetti – who was piloting a McDonnell MD-80 aircraft – was startled to see an unidentified rocket-like flying object flying past his plane as it flew over 22,000 feet over Kent, England.

Since the UFO was no more than 1000 feet above the airliner, and therefore the incident was classified as a very close encounter, the Civil Aviation Authority then began a formal investigation. About two weeks later, it issued a statement to the media:

“The pilot stated that the object was light brown, round, 3 meters long and had no means of propulsion. The plane was under the control of the London Air Traffic Control Center, which had no other aircraft nearby, but according to the pilot’s report A faint radar trail was seen 10 nautical miles behind the Alitalia aircraft. ”

In conclusion, it was said:

“The air traffic controller filed a report on the incident and investigative actions began immediately. Extensive investigations failed to provide any indication of what could have been seen.”

That the object was only three meters long suggests that there was no crew on board. Unless we assume that there were tiny little people sitting there. However, eyewitness encounters with very small aliens are actually extremely rare, while small UFOs are seen around the world almost every day.

Another notable case can be taken from the archives of the UK Civil Aviation Authority, which has collected many UFO reports, including cases involving UFOs that were too small to have crews.

One such report states the following:

“June 21, 1982, in Brindisi (Italy) – an unidentified object was spotted by the pilots. The object flew to the left at the same altitude as the plane (FL230) and 2 miles away. It was a shiny black” doughnut “the size of a car. The object twitched but did not change its trajectory. ”

The fact that the ship was about the size of a car suggests that it probably didn’t have a real crew either.

Now let’s take a trip from the UK to Bolivia. The documents declassified under the Freedom of Information Act and released by the Office of Defense Intelligence say:

“On the evening [Aug 8, 1979], the embassy received information that a strange object had been found on a farm near Santa Claus. about half an inch thick. The object was later described as about three times the size of a basketball. ”

Let’s go further. In the summer of 1946, Scandinavia became the target of many UFOs. They were called “Phantom Rockets”. There have been reports from Norway, Denmark, Finland and Sweden, and they have caused brief but alarming situations for these countries.

On July 11, the U.S. Embassy in Stockholm, Sweden prepared a secret note that read, in part:

“Over the course of several weeks there have been numerous reports of strange rocket-like objects seen in the skies of Sweden and Finland. In recent days, reports of such sightings have increased significantly …

The Defense Attaché is investigating through Swedish channels and has been promised the results of Swedish observations. The Swedes say they know nothing about the origin or purpose of the missiles, but they state unequivocally that they were not launched by the Swedes. “

On July 19, 1947, an article appeared in the Aftenposten newspaper (Oslo) entitled “Did two rocket bombs fall in Mjos?” The article contained the following notable words:

“This morning we received a sensational report from a man in Firing that two rocket bombs hit Myosa last night. They were in the shape of ordinary aircraft, but were quite small, with a wingspan of only 2.5 meters, and arrived today between 24.00 and 0:30 from the west at a low altitude above the southern part of Feiring, where they were observed by many people, including visitors to the Hasselbacken in Arnes. ”

Again, such a small ship can hardly contain a crew. This begs the question, maybe most UFOs, in principle, fly without crews? or they have technology and knowledge beyond our understanding.