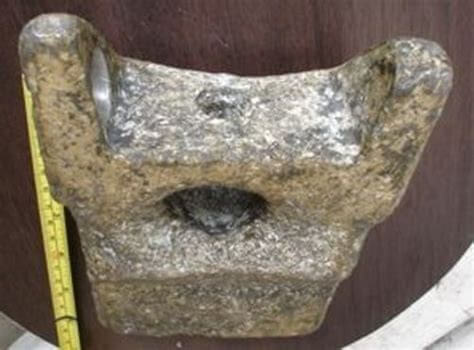 A rare aluminum device, called “wedge of Aiud” could be part of a 20,000-year-old UFO. It was the year 1973 when some workers from a quarry, near the city of Aiud, in Romania, accidentally discovered, some 10 meters deep, fossilized bones together with a rather strange object. The bones were mastodon, and the object was initially thought to be the head of an ax used by the ancients to hunt animals.

The curious block was donated to the History Museum of Transylvania, to be rediscovered and analyzed many years later. Its weight turned out to be 5 pounds, and its approximate measures of 20 x 12.5 x 7 centimeters.

The chemical tests carried out in a laboratory in Lausanne, Switzerland, to determine its composition, showed that the artifact was constituted mostly by aluminum (89%), with the minor participation of 11 other metals in specific proportions. The thick layer of oxide of a millimeter of thickness that covered of even form to the block helped to date the antiquity of this in about 400 years. However, the geological layer in which it was found (Pleistocene) suggests that it already existed some 20,000 years ago in the past.(Wedge of Aiud)

Florin Gheorghita, on the other hand, had the opportunity to examine the report and the analysis carried out under the direction of Dr. Niederkorn of the Institute for the Study of Nonmetallic Metals and Minerals (ICPMMN), located in Magurele, Romania, stressed in that it is composed of an extremely complex metal alloy.

The fact that this rare metal object has been found together with Mammoth (mastodon) bones causes one to wonder and poses many questions. The surprise for the scientists was not minor, since the aluminum in pure state is not present in the nature, and the technology to achieve a considerable degree of purity could only be reached in the middle of the XIX century.

The chemical composition of the object and its unusual structure, which highlights two perfect oval holes, have led to the emergence of several hypotheses about its true origin. While some think it could be the piece of a tool made by man today (it is not specified what tool could be) other scientists have compared the object with a reduced version of the point of support of a space exploration module, such as the Lunar module or the leg of the Viking probe.

According to this second version, the object could have belonged to a non-terrestrial spacecraft, or a piece of terrestrial spacecraft that fell into the river. However, neither the antiquity dated by the examination of the oxide layer, nor the one assumed by the geological stratum in which it was found, have been able to explain what function fulfilled an object of such a modern technology, in such a remote time.(Wedge of Aiud)

After the results of the test were analyzed, the wedge was sent to the Museum of History in Transylvania, Romania, where it was placed on a shelf, unaltered in its position, for two decades.

Finally, in 1995, another Romanian researcher, Florian Gheorghita, came across the artifact in the basement of the Museum. The wedge was tested once more. This time in two different laboratories: the Archaeological Institute of Cluj-Napoca and an independent Swiss laboratory. The tests confirmed the results reached by Fischinger and Niederkorn.

Gheorghita wrote in the Ancient Skies publication where he asked an aeronautical engineer about the artifact’s studies. The engineer pointed out the configuration and hole drilled in the wedge and claimed that a pattern of abrasions and scratches on the metal led him to believe that it was part of an airplane landing gear.(Wedge of Aiud)

In short, Aiud’s aluminum artifact is one of those mysteries that may never be resolved, that we never understand, as long as we do not open our minds, until we are able to accept (or at least suppose) that a civilization could exist before ours, or a contact between beings through space-time, perhaps we in the future will go back to the past with the intention of seeing mammoths and some clueless people will lose a piece of their tools from their ship? … we do not know … Maybe it’s an error. But what really puzzles us is that how could that piece reach the substrate 20,000 years ago … what was it doing there?