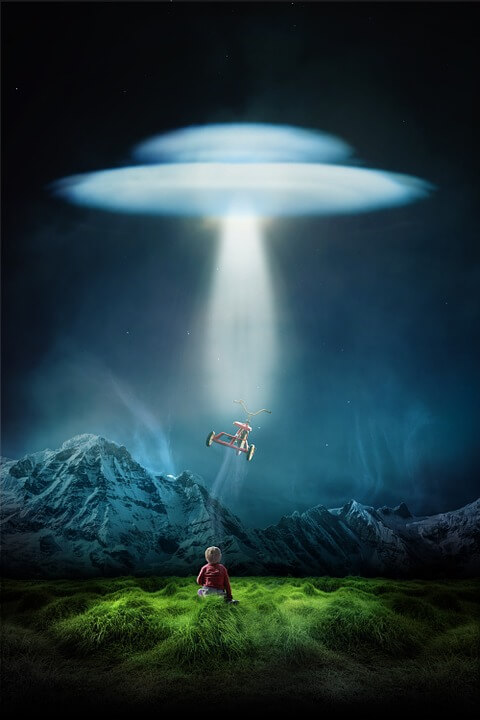 UFO Stalker
This is a true account of a metaphysical experience/possible abduction that happened to me in 1983 as a young boy, having to repeat the second grade after failing the previous year and having the joy of being stuck with Ms. Holt for yet another year. this single experience has remained vivid and clear in my memory for all these years, with no embellishing. this is truly written as it happened, at my age of seven years old. at that time I lived in center point, Texas. it was in the early morning hours before school started, I was seven years old. my mom and step dad, Jim Ubbins, had gone to work, and three brothers and sister had all gone to center point elementary school for the day. I felt strange that morning, so I decided to stay home from school. I felt weak, like something was writhing inside of me. I laid down on the living room couch whenI started to feel even stranger. A tickle sensation started in the middle of my back that began to work its way through my body, intensifying into a vibration that moved up through my stomach. by the time the vibration breached my outer stomach wall; or solar plexus region, the vibration had grown so intense that I actually could see its distortion in the air and my cells lost cohesion and were dispersed in the air as I lost consciousness. suddenly I was no longer on the couch in the living room. now I was in a dark void that had no dimension, and seemingly no end. My clothes were no longer present and I realized I was nude. I started running through this dark expanse, trying to find any kind of dimension resembling the world I was used to. as I ran out of fear of the unknown, a huge mass of swirling noise and color resembling a giant tornado manifested and started to chase me. it made this roaring, winding noise as Iran through the void to get away from it. while I ran through the darkness, time seemed like an eternity; giving me the presence of mind to realize that this thing couldn’t truly hurt me. I summed up all of my courage and stopped to face it. I grabbed it by its smallest end and threw it into the nothingness from which it came. I watched it disappear into the black, and the scene suddenly changed. suddenly there was dimension, as I felt the coldness of a floor on my bare feet. two images formed in front of me, superimposed upon a backdrop of black. one was a representation of big, resembling a large bubble that undulated rapidly. to the right to it, was a representation of small, as a small string that also vibrated rapidly I noticed how the two would frequently collide, causing each other to vibrate continuously. then I heard an androgynous voice say, big is infinitely big, and small is infinitely small, but both are the same. I then woke up on the couch, not understanding what had just happened to me. I continued on after previously wearing bi-focal glasses but after the experience, I no longer needed them. I also noticed my eye color had changed from brown to green, as well as the texture and color of my hair changed from straight and reddish to curly and brown. there is also an anomalous scar on my right ankle that cannot be explained. in 1989, my mom had divorced our stepfather because of his constant abuse. Sandra Neal took my brother bill, sister Lisa and myself to San Antonio, to our grandmothers house to live. after acclimatizing to city life, I was only seventeen, going on eighteen when I finally came forward and told my mother about my experience of the big and small.