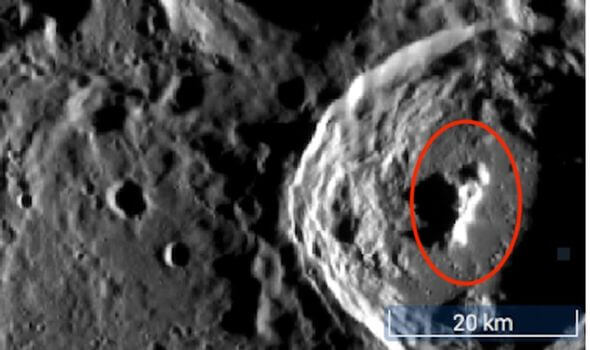 UFO enthusiasts have been excitedly analyzing archive NASA photos they believe depict an alien base on planet Mercury. The monochrome photos of Mercury are the source of mounting speculation with some believing they have captured something extraterrestrial in origin.

The verified NASA image is publicly available from the space agency’s Messenger archives.

Here are some more structures I found on Mercury today

The photos were shot by the NASA robotic spacecraft that orbited the planet Mercury between 2011 and 2015.

Mr Waring took to his UFO Sightings Daily blog to speculate about his latest dubious find.

UFO sighting: A ’10km alien base’ has supposedly been discovered on Mercury (Image: NASA)

UFO sighting: The monochrome photos of Mercury are the source of mounting speculation (Image: NASA)

He said: “Here are some more structures I found on Mercury today.

“I say white ceramic because these white structures are hard to photograph without a powerful glare of light reflecting off them.

“But we are fortunate here to have them in a shadowy part of the planet.

“Also, there are some other structures you may be interested in.

“With such evidence the world should no longer have any doubts about the existence of aliens.

“The odds of aliens existing are at 100 percent.