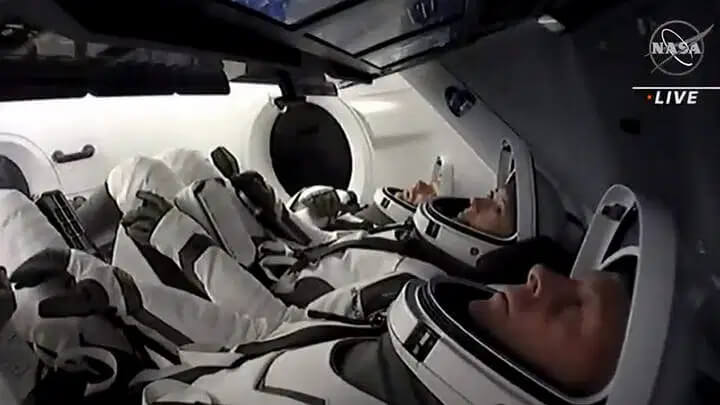 SpaceX Crew Dragon Faced with the threat of a collision with the UFO, the astronauts were instructed to don their pressurized spacesuits.

In the early hours of Friday, SpaceX and NASA successfully launched four astronauts into orbit aboard a Crew Dragon spacecraft.

The launch went smoothly, but the four crewmembers experienced a shock while on route to the International Space Station (ISS), when they were notified of a possible collision with an unidentified object.

“The NASA / SpaceX team was informed of the possible conjunction by the United States Space Command,” NASA spokeswoman Kelly Humphries told Futurism . “The object being tracked has been classified as ‘unknown’.”

There was no time to perform an evasion maneuver to get Crew Dragon out of the way of the object. Instead, SpaceX warned astronauts to don their pressurized suits in the event of a collision.

“The possibility of the conjunction stuck so much to the closest approach time that there was no scope to calculate and execute a reliable evasion maneuver, so the SpaceX team chose to have the crew don their pressure suits as a precaution,” Humphries detailed.

“The closest point to the object was 45 kilometers from the spacecraft, not very far on the large scale of space, but close enough to be concerned.”

US Space Command spokeswoman Erin Dick said the Pentagon notified NASA of the potential collision around 1:30 p.m. EST today, approximately seven hours after the spacecraft launched (shortly more than a third of the 23 1/2 hour trip to the ISS).

“After a more detailed analysis, the 18th Space Control Squadron quickly determined that there was no conjunction threat, that everyone on board was safe and that the spacecraft would not crash,” said Dick.

Numerous questions remain. How big was this object? And — perhaps most importantly — was it space junk or something else?

To everyone’s peace of mind, the Crew Dragon ship, dubbed Endeavor and previously used in the Demo-2 test mission, arrived safely this morning and docked with the ISS.