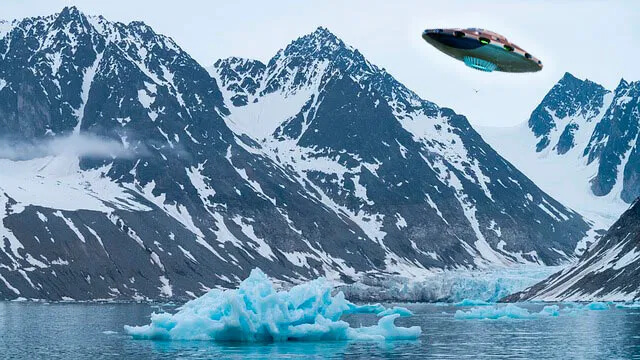 Svalbard, the Norwegian archipelago lies in the cold gray expanses of the Arctic Ocean, north of continental Europe.
The majority of its landmass is covered with glaciers, traversed by numerous fjords, and is shrouded in an almost perpetual night during the cold winter months.

It is a sparsely populated, largely untouched realm of majestic natural beauty, and it is also the site of a series of extremely bizarre alleged UFO crashes.

The first of two alleged UFO crashes in Svalbard allegedly happened in 1946, when US General James Doolittle was sent there by Shell Oil to investigate the strange air phenomena observed from time to time in the area.
These phenomena were termed “ghost missiles” by the military.

Later, journalist Dorothy Kilgallen claimed that General Dolittle had discovered a mysterious “object” on the shores of Svalbard – an alleged UFO that fell from the sky.
This object was taken aboard the American ship USS Alabama and then the governments of the US and Great Britain carefully classified everything that was associated with the alleged discovery.

Unfortunately, Dorothy Kilgallen passed away back in 1965, and now it is no longer possible to know from whom she received all this information and whether there was at least something truthful in it or it was all nothing more than rumors.

However, in 1952, the story of UFO activity over Svalbard unexpectedly continued.
In June 1952, a squadron of six Norwegian jet aircraft began summer maneuvers over Svalbard.
As they raced over the Chinlopen Strait, their radios began to crackle and emitted a static charge.
The Radios got shut down completely without any reason, leaving them unable to communicate with each other.
Surprisingly, at the very same time, the radar showed that an unidentified object was rapidly approaching the fighters, but the pilots themselves did not see anything visually.

The fighters circled over the area for quite some time without seeing anything unusual, and then Air Captain Olaf Larsen accidentally looked down and spotted a metal disk lying 40 to 50 meters in diameter, which was bright enough to stand out among the snowy landscape.

Further inspection showed that the disc was damaged and some parts and cables were sticking out of it.
The pilots reported the found object upon returning to the base and then an expedition was sent to the alleged crash site.
Later, the German newspaper “Saarbrücker Zeitung” published a report on what was found:

“A close inspection of a remotely controlled flying disc that landed on the Nordustland of Spitsbergen due to interference problems led to the following undeniable information:
The flying object with a diameter of 48.88 meters and sloping sides is circular and unmanned.

A round steel object made from an unknown metallic compound resembles a silver disc.
After ignition, 46 equally spaced automatic nozzles on the outer ring rotate the disc around a central plexiglass ball that contains measurement and control devices for remote control.

The measuring instruments (sensors) bear Russian symbols.
The radius of the disk seems to be more than 30,000 km, and the altitude is more than 160 km.
The flying object, which resembles one of the legendary “flying saucers”, has enough space for high-explosive bombs.

It is said that in the wreckage of the apparatus, the expert discovered a radio pilot transmitter with a plutonium nucleus, transmitting at all wavelengths with a frequency of 934 hertz, which was still unknown.
The investigation also showed that the flying saucer crashed due to a malfunction of the radio pilot system.

There was no crew in the saucer. Norwegian experts suggested that the disk started from the Soviet Union and fell over Svalbard due to an error in transmission or reception, failing due to a hard landing. The bizarre remote-controlled unmanned jet plane will be brought to Narvik aboard a ship for further investigation. “

So, it is possible that it was some kind of Soviet experimental aircraft.
But the story continued to develop.
As more and more people became aware of this, new details emerged, such as a report by Colonel Gernod Darnhill of the Norwegian General Staff:

“Some time ago, a misunderstanding arose when they said that the flying disc was probably of Soviet origin. However, we must categorically state that it was not built by any country on Earth. These materials are completely unknown to all experts, they are either not on Earth, or they are processed by physical or chemical processes unknown to us.

We must tell the public what we know about the unknown flying objects. Inappropriate secrecy can lead to panic one day. We now have material to start with. This means that laboratories can get started right away and can provide us with preliminary results soon.

Norwegian scientists believe that material from Svalbard can only reveal its secrets through nuclear fission; this is because it does not change at absolute zero when the air is liquefied, nor at the highest temperatures technically possible with our technology. All types of chemical treatments have also been tested. Scientific results will be published only after the conference on UFOs in London or Washington. “

Everything about the crashed object became more and more with the passage of time.
Soon there were more fantastic stories surrounding the alleged UFO disaster in Svalbard, such as a report in the Uruguayan newspaper El Nacional from Montevideo.

This report claimed that the Norwegian scientist Hans Larsen Löberg made it clear that the ship actually crashed on the German island of Helgoland in the North Sea and was definitely not Soviet as it did not have a discernible engine or any rivets, fuses, or bolts, and the object was supposedly powered by “magnetic forces.”

Löberg also allegedly stated that there were some “beam weapons” on board the ship, as well as the remains of real humanoid bodies.

The material used was as light as aluminum, but much harder and probably much more heat-resistant. From the things they found inside, they noticed water, which was three times heavier than regular water, and a few pills that might have been food.

There was also an apparatus that was probably a radio. It was rather small and did not have an antenna. They also found several books, probably navigational instructions, written in a completely unknown language.

The doors of the spacecraft were open. Just outside the doors were 7 bodies, burned beyond recognition. According to Larsen Löberg, scientists are of the opinion that the bodies belonged to men between the ages of 25 and 30, with a height of about 1.65 m. All had perfect teeth.

Loberg thought that the reason for the crash of this saucer must be that it was influenced by the explosions of the American hydrogen bomb. “

After that, the whole story becomes very vague, and there was nothing that could confirm any of the above.
Over the next decades, various versions of what happened were put forward, which could not give a single logical explanation.