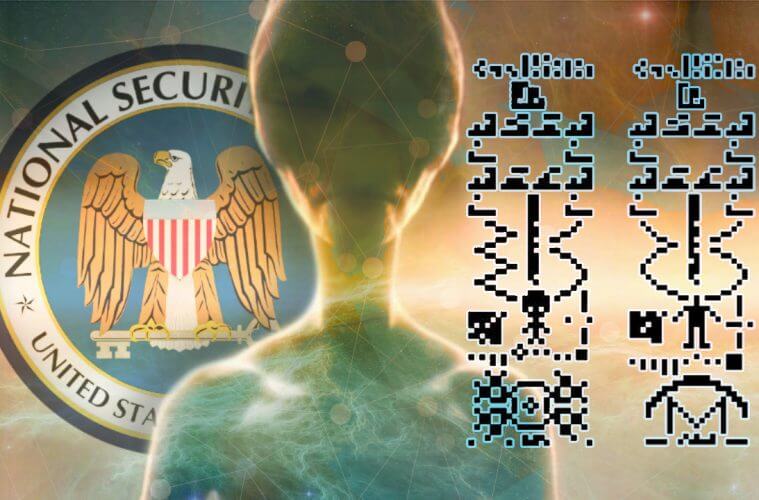 Not many people have noticed this, but the NSA has on its website a test of extraterrestrial contact under the title “Key to the Extraterrestrial messages”.(Alien message on the NSA website)

This is a very important step towards outreach to the UFO community. The original document was authorized for publication in October 2004, but curiously not “officially” was published in the public domain until April 2011! That document has to be seen by the world, as it is the actual website of the NSA, they put it there waiting for everyone to see it.

Do we want extraterrestrial contact evidence? Then we have them here! This a small step for man, but a great “leap for humanity”, is best described as a “treasure”. Of the available documents, this is particularly interesting since the NSA Technical Journal – Vol. XI, No. 1- which has been titled “Extraterrestrial Intelligence”. (Found here ).

The document written by Doctor Campaigne presents a series of 29 messages received from outer space. Here is a very interesting passage from that document: “Recently, a series of radio messages were heard coming from outer space. The transmission was not continuous, it was cut into several fragments with pauses, so be taken as units, to be repeated again and again.(Alien message on the NSA website)

Pauses are shown here as punctuation. Several combinations have been represented by the letters of the alphabet, so that the messages can be written. Each message except the first message is given here only once. The serial number of the messages has been provided for each reference.

On 21 October 2004, the NSA approved a part of Vol XIV No. 1 for public release. This is a report of a presentation to the NSA by Dr. Howard Campaigne regarding the decoding of the extraterrestrial messages they had received “from outer space”. Apparently these messages had actually been received via the Sputnik satellite, but no one had any idea how to decode the messages at that time.(Alien message on the NSA website)

At some point, unspecified in the document, Dr. Howard Campaigne and some other super mathematicians from the NSA in the cryptography department set the task of decoding the messages. There were a total of 29 decoded messages. It is curious, so to speak, that this document was prepared for the public domain on October 21, 2004. Why did not they do it? Because the NSA did not release that public information until April 21, 2011.

Despite being released, the NSA had been evasive with it and with hundreds of other NSA documents on contact with UFOs and extraterrestrials until they lost the lawsuit filed by Peter Gersten, an Arizona lawyer. When truly, the order came from the judge had to carry it out, and the NSA declassified the documents to put them in the public domain.(Alien message on the NSA website)

It is curious, however, that during his presentation Dr. Campaigne mentioned that there are “words” that have been translated, and some “words” that have not yet begun to be understood. He gives an example of a connective word that he knows is connective (the union of two or more instructions), but he still does not understand the translation of that word.

Critics are scared as hell of disclosing this information, as it proves beyond doubt that they are, and have always been, utterly mistaken. Their careers as critics are finished with the revelation of this material. They are already using the only possible “tool” left to say: “That’s old information. It has been there for years. ” As usual, either they are simply misinformed, or they are directly lying. It is true that the document was prepared for launch on 21 October 2004. It is true that the date is “years”.(Alien message on the NSA website)

But it is also true that he was not released to public opinion until April 21, 2011. This is truly information. No one from the government has stepped in front of the cameras and clarifies if it is true of the extraterrestrial messages. But, here we have the most secret intelligence organization in the US, the National Security Agency (NSA), openly revealing that there has been contact with intelligent aliens. Not only that, we’ve decoded your messages.

The publication of this document also tells us that extraterrestrial affairs are classified and all monitoring of extraterrestrial activity continues to be classified. Only a few documents have been released, I wonder what still remains classified? The United States Air Force also has a space agency separate from NASA. It’s called the USAF Space Command.

Since this document has been out of the public domain, it has been said that this was only a training exercise and the comments have been made stating “oh Dr. Howard Campaigne has a sense of humor”, but something tells me there is a Important reason why this document was officially released for all to see, maybe just maybe this is the backup plan for the near future to say “yes we told you we had alien contact, it’s on our website!”

You can download the document NSA Technical Journal – Vol. XI, No. 1 – “Extraterrestrial Intelligence” in this link .