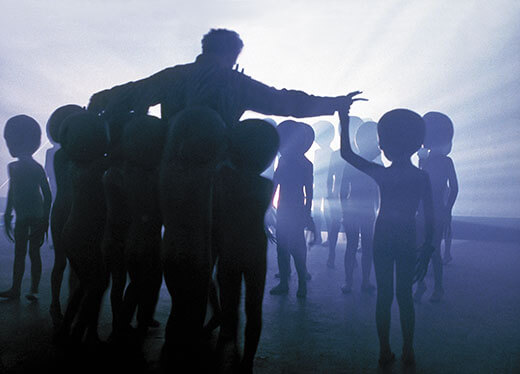 Aliens have never shown themselves to the public or proved for certain that they exist. There has yet to be the proverbial landing of flying saucers on the White House lawn.

Instead of an outright public visitation or invasion of Earth, the aliens prefer to infiltrate humanity through more subtle means. The contactees of the 1950s were the first to tell us that many aliens look just like us and can go about their business undetected. Some aliens are humanoid or they are shape-shifters who can appear human-like when desired. Other aliens can take over human bodies or share our minds to guide our behavior, and then there are people who realize they have alien origins and abilities.

US author Brad Steiger formulated a simple questionnaire in 1967 to help him interview para-normally talented individuals. After using it for two years, people began spontaneously saying that had dreams and memories of having arrived on Earth as part of an expeditionary unit thousands of years ago, others regarded themselves as survivors of an interplanetary war or as beings of light that have now become contained in a physical body.

Over the years, with the help of his wife Sherry Hansen, he developed the ‘Steiger Questionnaire of UFO, Paranormal, and Mystical Experiences.’ After interviewing 40,000 people, he found out that a lot of people had dreams or memories of viewing Earth from space, being a member of a UFO crew, visiting Earth as a Being of Light, seeing Earth in prehistoric times, viewing crystal cities and receiving knowledge from aliens on board a UFO.

Brad noted the case of a thirty-two-year-old man, living in Ontario, Canada, who said:

“On my native planet, I was a dream interpreter. I was sent to Earth to help prepare Earthlings for the coming UFO contact on a global basis.

I lived in a city of light, of crystal buildings, where everything was peace and harmony. I used dreams to interpret any forthcoming health problems and to help people better understand themselves. We had conquered pain and suffering from our mental abilities, and these are gifts that we will one day be able to give to Earthlings.”

Another respondent was a Cherokee physicist, who remembered living in the Pleiades constellation. He said:

“We lived in domed cities with translucent walls. We could fly, communicate with animals, transport ourselves instantly to other parts of our world.

I remember our city as a golden color – a place of great beauty and calm.

I came with others from my planet to help Earth through its birth pains into an intergalactic community and oneness. We were members of the priestcraft in ancient Egypt; we were alchemists in the Middle Ages; we are scientists and clergy in the modern world.”

Abduction researcher John Mack noted in his book “Abducted” the case of thirty-four-year-old Joe, who claimed he had weird dreams and alien experiences from childhood on wards. As an adolescent, he recalled looking in a mirror when he suddenly saw an alien looking at him. It had green or grey warty and bumpy skin with a small round head on a thin neck.

Under hypnosis, he told of his struggle between being human and alien. In his abduction memories, he recalled that he had an alien identity, ‘Orion’. In this humanoid manifestation, he was nearly eight feet tall, but he thought he could shorten himself if he wanted to. In this state, he had sexual intercourse with an alien woman called Adriana.

“Through guided visualization, I was taken on a trip to find my home. Jesus came forth as my guide. We went deep into the earth, then all of a sudden, we were up in the sky. We ended up at a really bright star, so bright that I couldn’t see anyone. There, I felt the love I’d been searching for my entire life. When I asked where I was, I immediately heard the word, Sirius… and I had never heard that word, or of that star, before.”

The day after witnessing a UFO near Jacksonville, USA, Lydia Stalnaker suddenly became psychic. Under hypnotic regression, she recalled being inside a UFO where she was strapped head-to-head with another woman on an operating table. This was spun around her mind merged with the other person’s mind. This turned out to be the mind of a female alien called Antron.

Antron is thousands of years old and lives in a glass tube on board a spacecraft that is close to Earth. She came from a green planet that has two suns in another galaxy from ours. Through Lydia, she explained that:

“Man was here originally, in the beginning, as we are. He was built to live forever, but he failed and now we have come to take the people that have chosen of their own free will to live correctly. They will be recolonized to live as in the original beginning. We are sent to do this job.”

The aliens amongst us are of many different types and origins. These range from aliens that look like us to those that deliberately take on our form to fool us.

There are the people who believe they are genetically related to aliens, or that they are sharing their body with an alien presence or that in essence, they have an alien soul or spirit at the core of their being.

Looking over the stories of Star People, it does seem that most of them have a childhood UFO experience followed by a lifetime of UFO-related dreams, memories, and encounters. They are also prone to having psychic abilities and paranormal experiences. Their beliefs shape their view of life on Earth, and they try to live in harmony with their fellow man and the environment. Many believe they are here for the purpose of helping humanity to evolve to a higher level of spirituality and to warn us that the Earth is on the brink of destruction if we do not mend our ways.