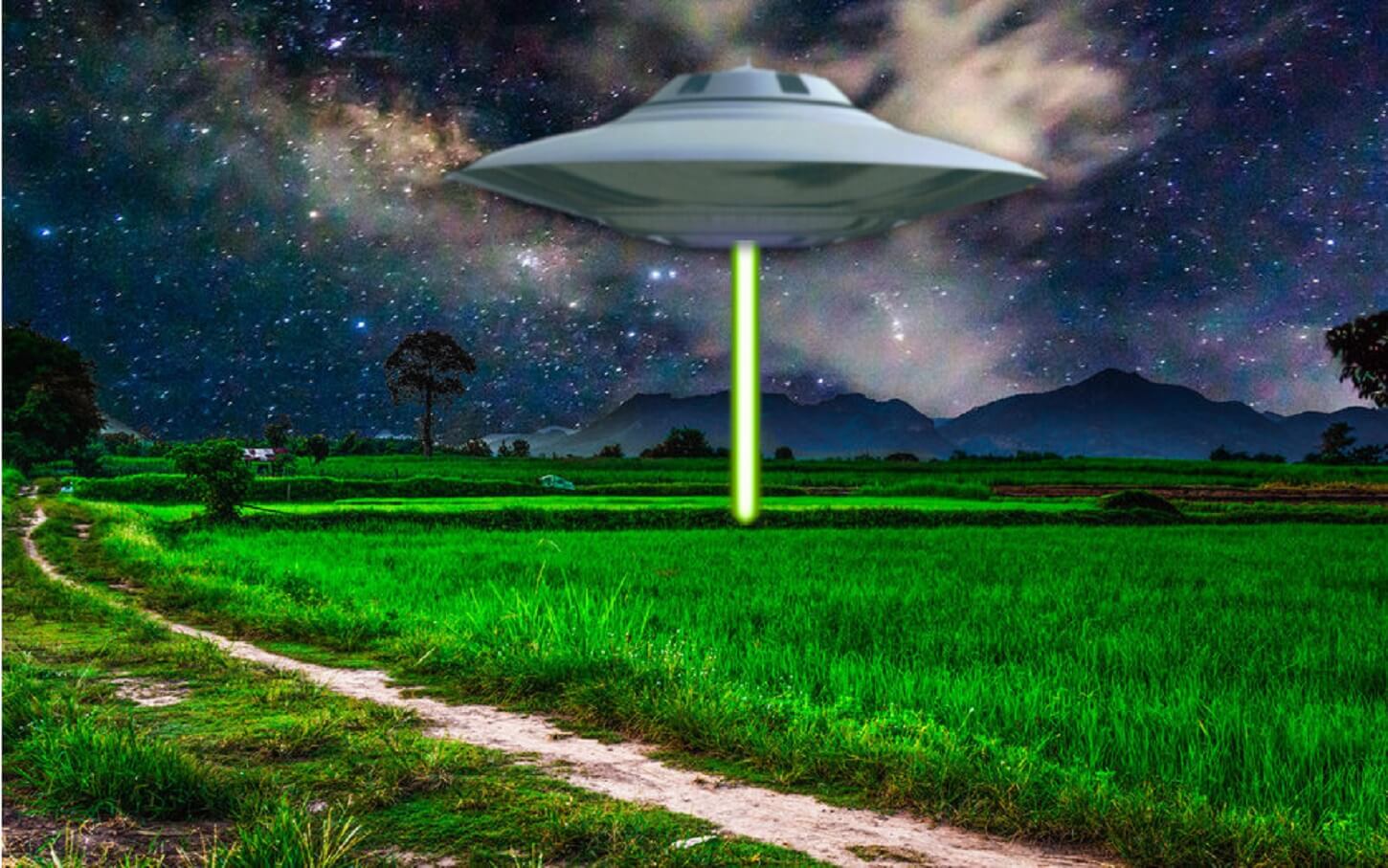 Argentina and the South American continent, in general, is a part of the world bursting with paranormal activity. And this very much includes UFO and alien encounters. One of the most well-documented of these is an incident that took place in the small town of Trancas in the north of the country in October 1963. An incident that would see three young women witness a strange craft at extremely close range. 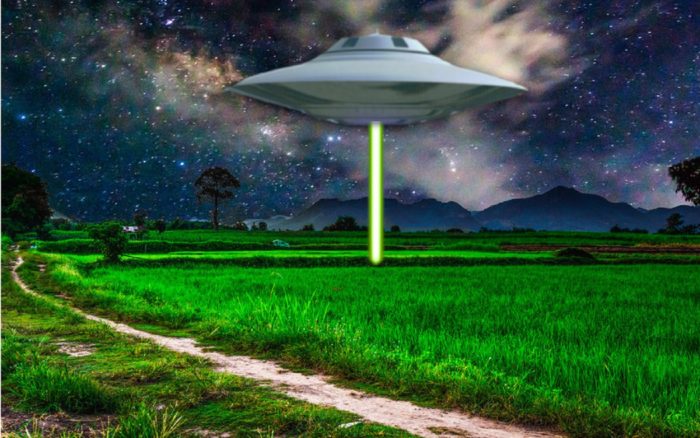 Depiction of a UFO shining a light beam to the ground

Incidentally, part of the account was used for the fictional blockbuster, Close Encounters Of The Third Kind, with one of the main witnesses, Jolie Moreno personally authorizing Steven Spielberg to use their story. You can view a trailer of that sci-fi classic below.

Strange Lights Along The Railroad!

As the evening began to give way to the night on 21st October 1963, two sisters, Argentina and Jolie, were settling down after recently arriving at the Moreno family home from the town of Rosario. Each had with them their small children, and each was married to a man in the Argentine army. With both men away from home on military service, the sisters had opted to travel to Trancas to see their parents and their other sister, Yolanda.

Following an evening meal – eaten a little earlier than usual due to the sudden failure of their electric generator – the entire household would retire to their bedrooms for an early night’s sleep. It was around 9 pm when the live-in domestic worker of the family, fifteen-year-old, Dora Guzman, appeared in the main part of the house looking to alert one of the family. She claimed to be able to see “strange lights” moving along the railroad.

With their parents asleep and Jolie feeding her young child, Argentina and Yolanda would speak to Dora to see what the matter was. Both could see how concerned the young girl was, something that was completely out of character for her. She would even go as far as to say there was “machines” outside near the tracks. Fearing the strange lights could be the result of guerrilla activity, which occurred relatively frequently, they decided to investigate for themselves. Quietly, they opened the door to their family home and ventured outside into the night.

A Green “Tunnel Of Light!”

One sister would grab a torch while the other would pick up a small handgun. Along with Dora, they set off in the direction of the railway tracks, using their farm crops for cover as they did. They could see the strange lights in the distance. Several “beams” would occasionally shoot into the air. Perhaps, they wondered, there had been a train crash? Or maybe a train had been a target of the guerrilla groups? They remained at a distance for several moments, believing they had seen several “human silhouettes” moving about in the distance. Then, as curiosity won out over fear, the three women decided to get nearer.

As they got closer, all three could see the lights more clearly. They were broken into two sets of three. As they focused on them more closely, they could see that each set of lights was the underside of a disc-shaped craft. Running in between the two discs was a green, beam of light creating a “tunnel” effect. They decided to get closer still.

Suddenly, they were in front of a pair of “dim greenish” lights. And they appeared to be heading in their direction. One of them wondered out loud if this was Rodriguez’s (one of the farm workers) pick-up truck. Then, the green light completely enveloped the trio and they realized the lights were not those of a truck. They didn’t appear to be anything of this world at all.

As the two sisters and Dora stood looking ahead and upwards, a huge disc hovered over them. Each of their faces and clothes shone in the green glow of the craft’s lights. Whatever this craft was, it was not the same as the two small discs they had seen produce the “tunnel of green light”. It turned slowly in the air as it hovered. Several rectangular windows, themselves emitting a green glow, were clearly visible to the witnesses. As were several such portholes on the underside.

As the trio continued to watch this cosmic craft in fascination and amazement a beam of “solid light” slowly emerged from a center-point on the underside of the object, eventually reaching the ground. Descriptions of the light later given by the women suggest some type of laser, although all were specific in mentioning the “solid” appearance of it.

Yolanda would step forward and slowly place her hand in the mysterious beam. They would notice how the light didn’t stop on her hand as a normal light would. It appeared to simply go straight through it. Although the young woman would later report that she could feel a hot sensation around the hand when under the light, it wasn’t uncomfortable or painful.

Then, the beam of light would slowly retract, and a mist began to gather out of nowhere under the craft. The mist particles shined a fantastic green color under the glow of the craft’s lights. It was then that the two sisters noticed that Dora seemed in a hypnotic state, staring blankly at the strange fog, which was growing thicker with every second. 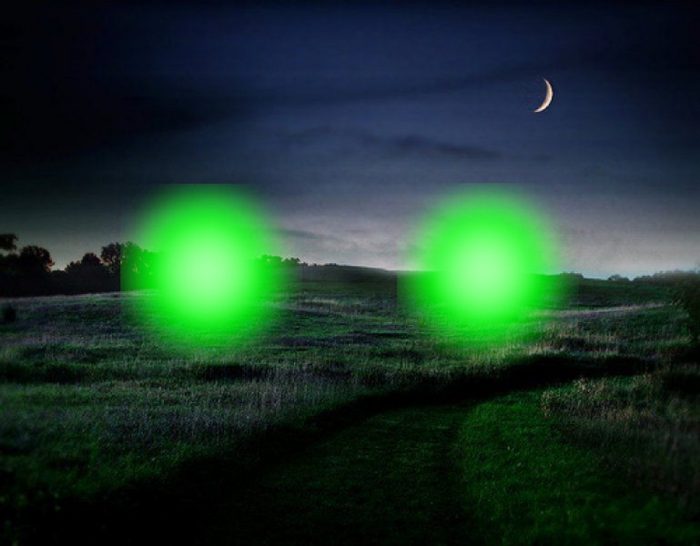 A depiction of the green lights of Trancas

As Dora continued to watch, still spellbound by the strange mist, along with the two sisters attempting to free of her trance, the green light suddenly changed to a hot shade of orange. Inside the middle of the craft’s underside, a set of yellow lights began to spin. The witnesses would later describe them as orbs in a ring or a circle, spinning. The craft itself began to rock noticeably.

Suddenly, a burst of flames surged out of the underside of the craft causing the three women to fall backward. They quickly staggered to their feet. Fearing they were under attack they turned and ran back to the house as fast as they could. They would glance back on occasion. Although the object was still there it didn’t appear to be pursuing them. They did notice how it seemed to move over the farmland as if surveying it, however.

Then, just as they neared the house, the light and the object vanished. The three women looked out over the farmland, which only seconds earlier was aglow under the bright other-worldly lights of the strange craft. Now, it sat peacefully and silently under the darkness of the night as if nothing had happened.

By the time the women returned inside, Dora was far from calm. Likely suffering from delayed shock, she began to scream that she had been burned. She hadn’t, but by this time, everyone inside was awake and rushing down the stairs of the property. Looking at the clock, the sisters worked out the incident had lasted just short of an hour.

Although some in the press would highlight slight differences in the descriptions of the craft by the three women, there was no real indication of falsehood on their part. Furthermore, there were several corroborating witnesses.

A neighbor, Francisco Tropiano, would claim to have seen strange lights over their home. He would state this was just before 10 pm that evening. He would describe them as extremely bright before suddenly disappearing. The following day, as the local press began to get wind of the incident, a doctor who was driving his car near to the small village claimed to have seen “almost fifty strange lights” passing across the sky.

The family would be under siege from journalists and UFO investigators alike for some time following the incident. At one stage they had to enlist the help of local police to protect them from the barrage of people seeking to speak with them. Despite several researchers investigating the incident extensively, the encounter remains unexplained.

The descriptions of the craft by the witnesses certainly match other similar encounters. Both of their era and of the contemporary age. As do some of the activities of the craft. Perhaps of most interest, in this case, are the descriptions of “solid light”. Many other reports mention very similar beams, as well as the “slow release” of such a beam as it travels to the ground below. This would suggest highly-advanced technology, certainly a lot more advanced than the public were led to believe was available. That, then, would suggest it hails from somewhere else. Perhaps, somewhere in the great beyond of space.