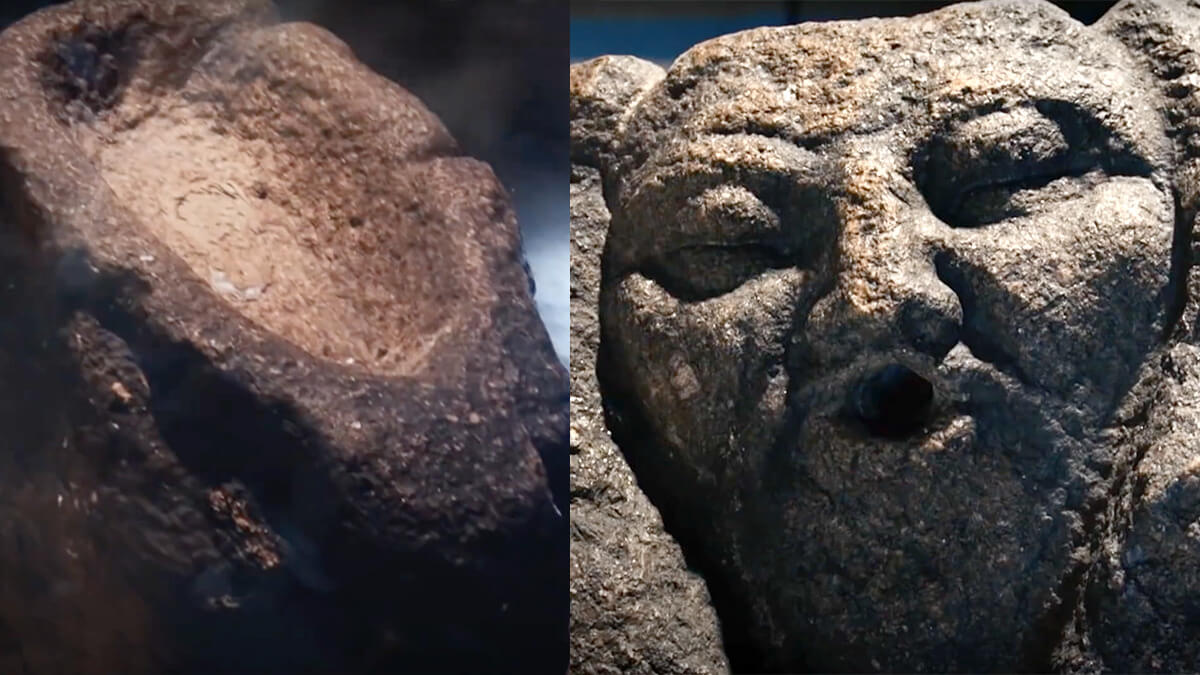 Chicago is home to a 3000-pound red granite boulder with a strange face carved on it. It’s called the Waubonsie Stone, (also spelled Waubansee) “probably the first so-called statue” in Chicago’s history, according to the Chicago Tribune in 1976.

Once, the huge stone sat at the river’s mouth near Fort Dearborn, constructed in 1804. Once, it stood about a half-mile walk from Lake Michigan near the Michigan Avenue Bridge.

For centuries, (at least) the site was an important travel and portage route.

Like many megaliths, people suspect the Waubonsie Stone could be anywhere from hundreds to thousands of years old. It features a large face with closed eyes, an open mouth, and a pronounced short stylized beard.

On the top of the stone, a four-inch-deep basin suggests horrific sacrificial purposes. However, others suggest it was merely a Native American device for grinding grain.

Host and forensic geologist Scott Wolter travels to Chicago after a tip from Indiana resident Scott Mastores, M.D. There, the two men go to the Chicago History Museum to see one of the oldest relics found near the city.

When they arrive, they learn that the stone is in secret storage.

Alter shows a photo of the Waubonsie Stone sitting in the side yard of a Chicago lawyer Isaac N. Arnold.

Arnold was a lawyer who became a representative in Congress and a close friend of President Abraham Lincoln.

At his home, the carving sat among a memorial after the Great Chicago Fire of 1871 destroyed Arnold’s home. (Sadly, Lincoln memorabilia included) After his death, Arnold’s daughter donated the Waubonsie Stone to the Chicago Historical Society.

Then, Alter agrees to take them to see the Waubonsie Stone in person, but first, they have to agree to secrecy. The stone has high “historical value.”

“I can take you to see it, but you can’t tell anyone where it is,” says Alter.

Like many artifacts in the museum, he notes it’s “worth a lot in historical value,” Alter says.

Indeed, Frank Joseph, the editor of Ancient American magazine, once said the Waubonsie Stone could be among the most valuable artifacts “in the pre-Columbian history of North America.”

They travel to see the stone in a secret location.

Made Into a Drinking Fountain?

Today, the Waubonsie Stone weighs about 3,000 pounds. However, Alter says the someone cut the stone around 1914.

“When the museum took possession of the stone somewhere around 1914, several feet were lopped off the bottom,” said Alter.

“They cut it off?” said a shocked Scott Wolter.

“Well, yes, it’s something that wouldn’t happen today in a museum. But the owners of the museum wanted to make it into a drinking fountain,” said Alter.

“That is every historical archivist’s nightmare, is cutting an artifact,” says Wolter.

Sadly, it seems the staff cut a hole in the top of the stone so that water would come from the mouth. Thus, one of Chicago’s oldest artifacts once served as a drinking fountain “for the benefit of school children.”

If only they knew the stone was once possibly used for horrific purposes?

Although it appears the museum staff created a hold to make a drinking fountain, other holes appear older. Wolter notices two “rounded triangular holes” on either side of the Waubonsie Stone.

“I’ve seen stone holes like this before. Hundreds of them have been found on rocks along lakes and rivers in the Upper Midwest and on the East Coast,” says Wolter.

Generally, these stone holes or “mooring stone” holes are four to five inches deep. On the Waubonsie Stone, they are about two inches deep.

Perhaps, someone once tied ships to the stones using the holes? To create such a precise hole, one would need a chisel and hammer, suggests Wolter.

In the distant past, were these stones used to fasten ships? If so, white explorers supposedly didn’t find the Chicago Portage linking Lake Michigan to the Mississippi River until the late 1600s. However, Native Americans had been using the area for centuries.

Who Carved the Waubonsie Stone?

Today, nobody knows for sure who carved the Waubonsie Stone. Its historical value is apparent, yet it seems largely ignored. However, a conventional tale was often told for an explanation.

“Many people believed that the stone was carved by a soldier from Fort Dearborn,” said Alter. “And, because Waubonsie visited the fort a lot, the soldier supposedly carved the face of the Chief.”

However, there’s no documentation about the anonymous soldier, as Alter readily admits. A book from 1881 called Chicago Antiquities by Henry H. Hurlbut is a source of the story.

At the Historical Society, text on a wall accompanying the stone once held the soldier story was the official version.

Interestingly, Hurlbut’s text suggests the stone used to be standing with a large portion buried.

“The red-granite boulder, Hurlbut tells us, hitched a ride from “the far North…upon a cake of ice to Chicago, in the days probably when the prairies were formed”–that is, it was deposited by a glacier thousands of years ago during the last ice age. The rock ended up on the south bank of the Chicago River near the lakeshore; it originally was eight feet high but was buried three feet below the sandy surface,” states the Chicago Reader.

Of course, the stone face bears little to no likeness whatsoever of the Chief. It would take a great leap of logic to claim otherwise. In fact, other historians long called the stone the “Stone of Sacrifice and Death,” suggesting it was created for darker purposes long ago.

Which explanation is more likely?

An Ancient Standing Stone in Chicago?

Wolter notes that the Waubonsie Stone must have been originally standing. Thus, it’s a Standing Stone, similar to megaliths found around the world.

“This stone, if it was upright like we think, as it’s described in this document, then could be ancient,” says Wolter. “We’re talking potentially thousands of years old, erected by man.”

Unlike many such megaliths, this one features a face with closed eyes and an open mouth. The men notice the face is similar to a Death Mask, created to honor and remember a famous person.

If the Waubonsie Stone is a Death Mask, then what culture carved it? Today, we can only speculate, but there are many ideas.

Some suggest the ancient Mississippian Culture must have carved the stone. Nearby, the Mound Builders flourished from 1000 BC to 1300 AD., and their largest site was Cahokia, in downstate Illinois.

Sometimes, they created clay pottery featuring human heads and faces. Another suggestion is that the Aztecs traveled to the area long ago from Mesoamerica.

However, there are so far no proven links between the Mound Builders and the Aztecs or Maya. And the Mound Builders didn’t create other stones similar to the Waubonsie Stone. If they did create the sculpture, why would they carve it in the Chicago area?

Another idea is the ancient Phoenicians from the Mediterranean arrived in the area thousands of years ago. Maybe, they were the ones who were mining copper around northern Michigan as part of an ancient Copper Culture?

Altars from the Mediterranean bear carvings with a striking resemblance to the Waubonsie Stone. As author Brad Olsen points out, the Phoenicians created Tophets, large sacrificial alters. Olsen says the Waubonsie Stone’s bowl-shaped recess is approximately sized to fit a human child.

“As grisly as it sounds, Scott, I think it’s indicative of child sacrifice on the banks of the Chicago River thousands of years ago,” says Olsen.

Were the Phoenicians sacrificing babies in the Chicago area in the distant past?

South of St. Petersburg, Florida, someone discovered a stone carving like the Waubonsie Stone, the show claims. It’s called the Sea Market Altar Stone. Both stones have a large impression on the top, seemingly used for sacrifices.

Judging by their resemblance to each other and Tophets, Olsen believes the Phoenicians created both objects. By sacrificing someone or something on the altars, they may have been trying to bless their journey back across the ocean.

An Egyptian or Phoenician Relic Found in Michigan?

Next, Wolter travels northwest to Colfax, WI, to talk to Wayne May, publisher of “Ancient American.” May claims to hold an Egyptian-style Ushabti funerary figurine. These small statues were placed in burial mounds.

May claims he purchased the Ushabti from a woman after her husband passed. The man supposedly found the figurine in a mound along the Des Plaines River north of Chicago. Since the Phoenicians copied Egyptian art, Wolter is convinced it’s more evidence they were once in the area.

If the story is true, it certainly confirms there were artifacts from other parts of the world reaching the Chicago area long ago. Either through trade or direct human arrival, the influence in North America is there.

Both Wolter and May came to believe the evidence points to the Phoenicians carving the Waubonsie Stone.

“As reprehensible as it may be, those Phoenicians may have sacrificed babies on the Waubonsie Stone,” said Wolter.

By making sacrifices, they hoped to have a safe crossing back to their homes in the Middle East.

However, there’s no definite proof. Perhaps the sacrifice would be attributed to some other culture known for sacrifices like the ancient Druids? Also, the Vikings arrived 500 years before Columbus? Could they have some connection? Some have noted the rounded triangular holes are similar to those of Viking mooring stones.

On the other hand, the face bears a striking similarity to the giant faces carved by the mysterious Olmec of Mesoamerica.

Of course, Ancient Astronaut theorists will have their own ideas. Maybe, the face represents the bearded Anunnaki?

Despite all of the possible explanations, the Waubonsie Stone remains a total mystery. Perhaps, rather than sitting in a warehouse, it’s time for experts to look at it with renewed interest? (and seriousness) If that were done, it’s possible the stone could radically change conventional timelines. As we see with some other artifacts, that may be why it tends to remain in obscurity.