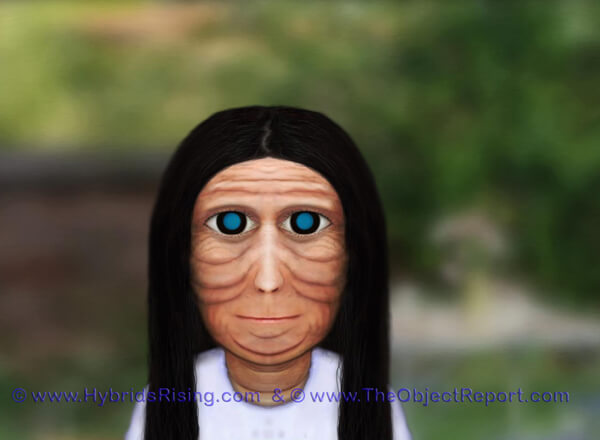 Several different types of Wrinkled ET Humanoids have been reported and described by Abductee-Experiencers and this information has made it into the literature in several publications. However, their descriptions are so varied it’s impossible to discern any real information studying them as a single race or species; therefore, we can only provide examples taken from the best sources and let the reader decide who they are and what their purpose is for interacting with certain Humans. Please keep in mind that many of the beings have the capability to use screen imagery and camouflage response techniques, and this may explain the variations people report. It is possible the physical variations may not be as great as they appear or they may, in fact, turn out to be just as diverse as these reports indicate. It is also clear in some of the reports, the beings wrinkled “skin” was actually that of a space suit or other protective coverings.

This image is from a well known contact case and this Abductee-Experiencer has seen this particular type of being, likely the same being, throughout most of their life. This is a rare case because of the continuity with Wrinkled Humanoid interaction of this type, i.e., documented over the long period of time of 20+ years. In other words, as compared to the other cases listed on this page, this is one of the few where interaction occurred, and was consciously recalled, more than once or twice. Another note about this case is because this being appeared the same each time, we might speculate that she does not alter her form, i.e., via screen imagery or a camouflage process. This being has also been seen with another of her species who appears physically similar to her in all respects listed here. While one Abductee-Experiencer relayed he at first saw an African-American male, upon closer examination, gray folds in the skin on the face were observed and the skin texture appeared similar to that of an elephant’s skin. The longer he studied the being’s face, the easier it was to detect the deep folds in his skin. As with the Greys, Blond Nordics and others, it is apparent Wrinkled Humanoids have similar capabilities to camouflage their true appearance. We hope you will keep this in mind when reading about these other cases presented on this page.

Other reports involving beings with wrinkled skin, including skin described as being similar to that of an elephant follow:

“The witness woke up in the middle of the night after hearing a noise. She went to the window and saw two brown beings, about 4 ft tall. The beings were thin and had long arms; their heads were large in proportion to their bodies. The window was open and one of the humanoids came up and looked inside at the witness. Shocked and terrified, the witness hid under the bed the rest of the night. The beings walked upright and had huge black eyes. The one that came up to the window had a brown wrinkly face. They wore similar combination dark outfits. – Sunnyland, IL, 1971

“It was very wrinkled, and it appeared to me to be something like an elephant’s skin but I don’t know if it was a metal or what it was but it seemed to be very wrinkled with the wrinkles running horizontal.” – Pascagoula, MS, 1973. “The rounded head was grayish (between gray and flesh tone), except for a darker color on top, and the face bore wrinkles or loose skin like an elephant’s hide. Angling upward across the forehead, two large ‘egg-shaped’ eyes with large dark pupils.” – Manchester, NH, 1973

“His skin was dark brown & he had pointed ears, but his large head had no eyes, nose or mouth, merely wrinkles on the ‘face,’ and 3 silver colored ‘fangs’ 2 inches long where the mouth should be.” – Kofu City, Yamanshi Prefecture, Japan, 1975.

“There were six occupants 3 feet tall who had long slit like eyes, ape like noses, and no hair. The skin of their faces seemed very wrinkled. They wore gloves. The witness could hear ‘a garble of voices’ talking, like a bunch of CB voices, and felt extreme heat from the craft. She watched it for about 15 minutes, after which it rose straight up and flew off to the south. When she got back in the house she found her face and legs red from the heat. Her dog, which reacted noticeably to the object, would still not let her go near the area a month later. No traces were found at the site, which was muddy.” – Gorham, NH, 1977

“My brain was functioning but I could not do anything physically. I tried to call out to family members but I could not force the words out. At this stage I started to panic thinking I would not walk again. I thought I was truly paralyzed. All of a sudden I looked my right side of the bed and I could see 3 or 4 figures wearing dark robes with hoods on their heads. Their faces were very wrinkled and shiny black in color,” 1988. – Sydney, AU

“Eduardo Martinez was driving on the road near the city when his vehicle engine and headlights suddenly quit. He stepped out of his car and was approached by two men, wearing dark blue coveralls that had dark eyes, black hair, and wrinkled skin. The humanoids communicated via telepathy and told Martinez they were a peaceful race and did not wish to alter things on earth. Among other things the humanoids told Martinez, was that they have been visiting the earth since 1971 and had at different times taken earthlings up into their spaceships.” “Fifteen subjects mentioned seeing one or more entities who were prominently wrinkled. These were sometimes referred to as ‘old ones’ and thought to be important.”

“Two adults reported seeing strange lights and then experienced a period of missing time. The witnesses reported another type of humanoid described as tall with a wrinkled appearance. This being inserted some type of rod-like instrument into their eyes.” – Casino, NSW, AU, 1996

The HR Team would like to thank Albert Rosales for several of these firsthand accounts. Rosales also has examples of beings wearing what appear to be spacesuits or garments that are wrinkled in a similar fashion to what is termed in America as “The Michelin Man.” We encourage you to visit his website, to which links are provided in the Sources for this article.

A young Polish artist named Kuba Szczepański has illustrated many images of ETs and his web album can be accessed from the Sources section below. On the right is Kuba’s interpretation of “The Michelin Man ET.”

Probably one of the best known illustrators of alien beings is David W. Chace. He has an interesting version of a being with wrinkled skin in his online sketchbook. The illustration can also be accessed in the Sources section and we encourage you to take a look at his interpretation of a being with wrinkled skin. One of the “flat headed” Extraterrestrials he depicts is mentioned in our discussion on our Brown Dwarfs page.

Another great source for illustrations of what the various beings look like is Kesara Dennett’s Art site. This is an excellent representation of a Wrinkled Humanoid.

Also on Kesara’s site is an excellent representation of a being described in America as “The Michelin Man” and it can be viewed here:

The reports referenced in this article are obviously not all be related to the same species of Wrinkled Humanoid, and like The Blues, they remain a rather elusive and little understood race or species of Extraterrestrials interacting with Humans. Some of these reports may in fact involve a species of Hybrid we are unfamiliar with. On the other hand, it is likely that just as Human’s age and our skin loses its elasticity and becomes wrinkled, the same may true for certain species of Extraterrestrials; however, there is no way we can know this with certainty.

We hope this window into Wrinkled Humanoids has been educational. These are by no means the only examples of interaction between Humans and ETs with wrinkled skin, so we encourage you to seek further and educate yourself about the contact which is occurring on our planet. Remember, there is a lot of misinformation (false or inaccurate information that is spread unintentionally) as well as disinformation (false information that is spread intentionally) on the Internet, so seek wisely.