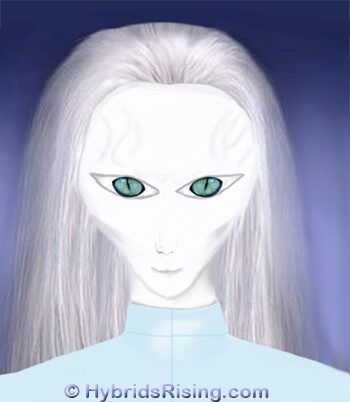 By “Henry” and Hybrids Rising Many people are aware of Charles Hall’s involvement with the Tall Whites and his description of them behaving arrogantly at times. He also said they tended to value high ranking officials and people in higher ranking social structures over those of lower rank or those perceived to be from a lower socioeconomic class. This was also the case with Hall, who only seemed to get along with the Tall Whites by allowing them to refer to him as their “pet,” as we would refer to a dog or cat. The following account is similar in that it provides another independent example of how these Beings view humans, especially the humans they had abducted on this particular November evening.

I was in a room with male and female ETs who had blond-white hair, very white skin, and were wearing blue bodysuits. They were about 5 feet tall and appeared androgynous. I actually heard them telepathically speak before I saw them, which is how I was alerted to their presence. I heard one of them say, quite clearly and in a condescending manner,

“Let’s see how much rum and pills the monkeys can take.”

I was also aware of other humans nearby and I immediately felt this remark was a slam against humans in that these white ETS were referring to us as “monkeys” and assumed we all drank rum and took pills. I was really insulted and told them,

I then began wondering if they had brought aboard a group of intoxicated people as several of the beings headed into another room where these other people were and I could hear them carrying on.

I looked around the room I was in. It was white and somewhat spacious. The only thing in this room was a counter or a long, medium-blue colored table, similar in color to their bodysuits. It all looked quite sterile. These beings’ attitude was disgusting. They reminded me of white supremacists because this is how they viewed themselves as compared to humans: They consider us “monkeys.”

My next memory is of looking down at my hand. I was holding a weapon that was shaped similar to a medium sized spoon. The rounded portion was in the palm of my hand and the handle was near my fingertips. On the end of this weapon was a protrusion. It wasn’t real sharp and it protruded outward about 1-1/2 centimeters and I was holding the object as a weapon.

There were two remaining Whites some feet away from me and they took up a defensive posture. They kept their distance from me as I held the device and pointed it toward them. I was laughing at them because they were afraid of me. I said,

“The tables are turned now, aren’t they? You’re not so smug when your weapons are trained on you, are you?” I was also thinking that I would steal the device and take it back with me and they didn’t like that at all. I don’t know if the object was truly a weapon, but there was something about it they were very leery of. All of a sudden – as if the emotion were somehow implanted in my mind, I felt extreme fear* and I turned and ran out of the room. I approached a door that appeared to be locked but then I was suddenly on the other side of it, so the door was put there as an illusion to make me feel trapped. I continued to run as if my life depended on getting out of there and away from them. At this point, I became aware they were putting up telepathically or technologically induced barricades to block me and slow me down so they could apprehend me. I suppose they must have done so because that is where my memory ended.

*The fear was likely telepathically induced by the two Tall Whites.”