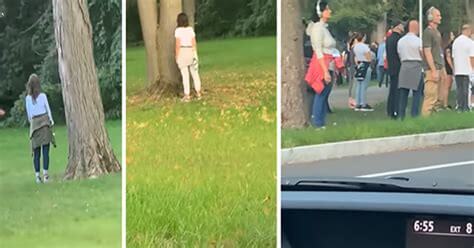 The following video may actually seem quite scary to you and for good reason as this in itself is one of the strangest clips we’ve actually gotten the chance to report over.

The video comes to us from New York, US, as a YouTuber record this strange behavior that the locals appear to be undergoing as she drives past them.

Despite the fact that she is driving relatively close to them none of them even flinch in the slightest which causes her to quickly drive away in fear.

The most commonly accepted theory here is that the people are actually under some sort of mind control device that effectively is booting them up to give them orders as we speak.

The video shows that a lot of them are also wearing headsets and earphones which could be an indicator that that’s where they’re getting their orders from. The fact that they’re all older too does signify that this could only work on older individuals.

Others in the comments did bring up how this could be a glitch in the Matrix too. What this implies is that the reality as we know it is actually a simulation and that sooner than later it is going to break, which is what we’re looking at over here.

Do you think this is a glitch in the matrix or is this an actual mind-control experiment we’re witnessing?