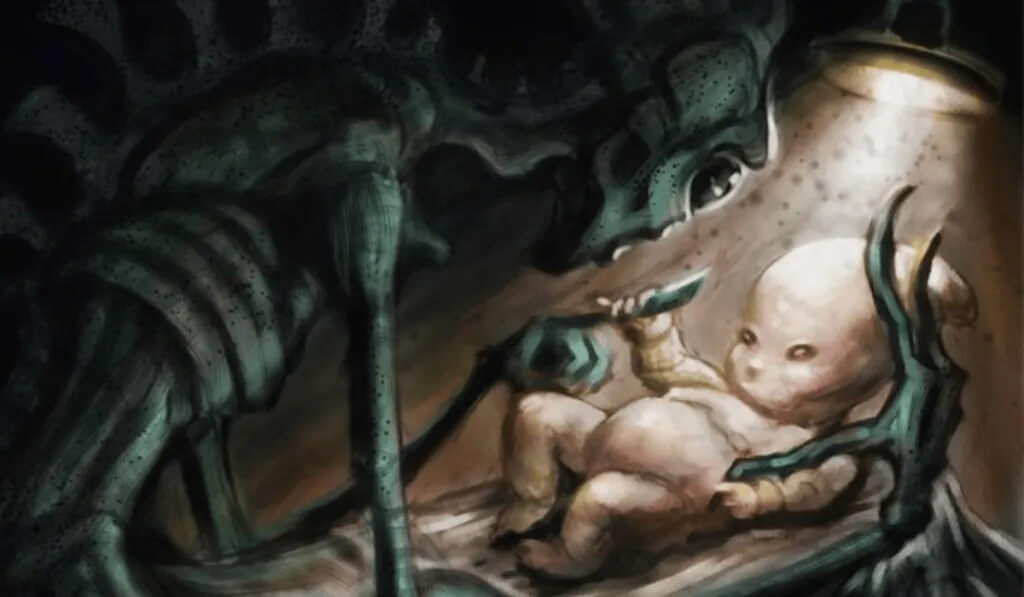 24-year-old Megan Liker, from Australia, once said that aliens had been using her to produce hybrid babies for 4 years. She insisted that she had given birth to 48 hybrid children.

In May 2001, Megan Liker married her college friend Andrew Mayer. They wanted to have a child, but Megan could not get pregnant.

It turned out that Megan could not have children due to an incomprehensible old age and the deterioration of her internal reproductive organs. She had a 60-year-old woman’s uterus. According to the doctors, she has given birth many times.

This news shocked Megan. She was sure that she had never become pregnant before. A way out of this strange situation was suggested by one of the attending physicians. He advised several sessions of hypnosis to clarify the strange circumstances surrounding the patient’s past.

In a hypnotic state, Megan told the doctors an incredible story that shocked them. Once she was walking along the alley of the city park when she suddenly noticed a UFO which was hovering over her.

She got scared after the UFO approached her so she tried to run but suddenly felt that she was pulled up by the beam of light inside the UFO. Megan felt dizzy and passed out.

The girl woke up in complete darkness and silence. She began to scream and call for help, but no one responded. Having examined the room by touch, the girl determined that she was in a tiny room with absolutely smooth walls and floor. She lost track of time and almost went mad from the complete silence and darkness.

Suddenly, a bright light flashed, and Megan was able to make out human silhouettes. Two small creatures approached her and ordered her to get up. The creatures were unusually small in and barely reached Megan’s shoulder. In a couple of minutes, she realized that they were not humans.

They were strange creatures with large heads and slender arms and legs. They were indifferently looking at the girl with their huge black eyes. She was taken to a place that looked like a surgery room.

The grey began to carry out something like a medical examination, after which she was placed in a cell with transparent walls, floor, and ceiling. To the right and left of her, as well as from below and above, there were exactly the same closets in which the other captives were.

After a while, Megan managed to contact with her neighbor, a young pretty female about 25 years old. Her name was Kelly Beit. The two girls have learned to communicate with each other using various gestures and signs.

“They need us to have children,” Kelly explained.

Megan understood the neighbor’s words soon. About two weeks later, her belly began to round, and just a couple of months later, Megan gave birth to her first child. During the birth, several newcomers were present, who indifferently watched the woman writhing in front of them. As soon as the child was born, he was immediately taken away. But Megan managed to catch a glimpse of her child, which disgusted her.

According to Meghan, hybrid babies looked like human babies, but they had huge eyes.

After a while, the “examination in the operating room” was repeated, and then another pregnancy followed, and another and one more. Meghan reported that the gestation times for hybrid babies were extremely short compared to human babies. The hybrid was hatched for no more than 4 months. She said that she was kept at the lunar base, and there were pyramidal structures. In one building, the women were kept, in another, the children were born.

In Megan’s case, this all went on for about four years, during which she gave birth to 48 hybrid children, after which she became sterile, and therefore not interesting for aliens. She was returned to Earth, having previously her memory been erased.

What were the four years spent in this fantastic incubator filled within her memory? It turned out that Liker was sure that she had served in the army under a contract for those four years, but the Australian Ministry of Defense, where she subsequently applied, said that they had never had such an employee, and thought that perhaps Megan Liker was just crazy.

Ufologists are sure that the memories of military service were simply implanted in the girl’s memory in order to oust others, about the incubator. However, this raises the question, what kind of incubator is on the Moon, and for what purposes are the “grey” creating a whole army of aliens? Maybe a new race is being prepared to conquer the Earth?