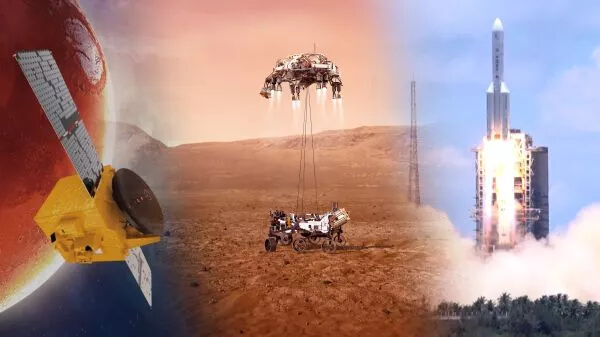 It’s a busy February for Mars, with three probes from three separate countries arriving at the Red Planet over the course of just nine days. But this Martian party didn’t happen by coincidence — it has to do with the mechanics of both Earth and Mars’  orbits.

The United Arab Emirates’ first interplanetary mission, the Hope probe, achieved Mars orbit Tuesday (Feb. 9), as Live Science sister site Space.com reported. China’s first interplanetary mission, Tianwen-1, is scheduled to enter its own Martian orbit Wednesday (Feb. 10). The Chinese probe includes both an orbiter and a lander with a rover onboard, which is expected to try to land on the surface in May. And on Feb. 18, NASA’s first-of-its-kind descent vehicle will reach Mars and plunge directly through its atmosphere. If all goes according to plan, the vehicle will shed its outer shell and use rockets to stop its descent at the last moment. Then it will hover above the surface to lower the rhinoceros-sized, nuclear-powered, $2.7 billion Perseverance rover to the dirt via skycrane.