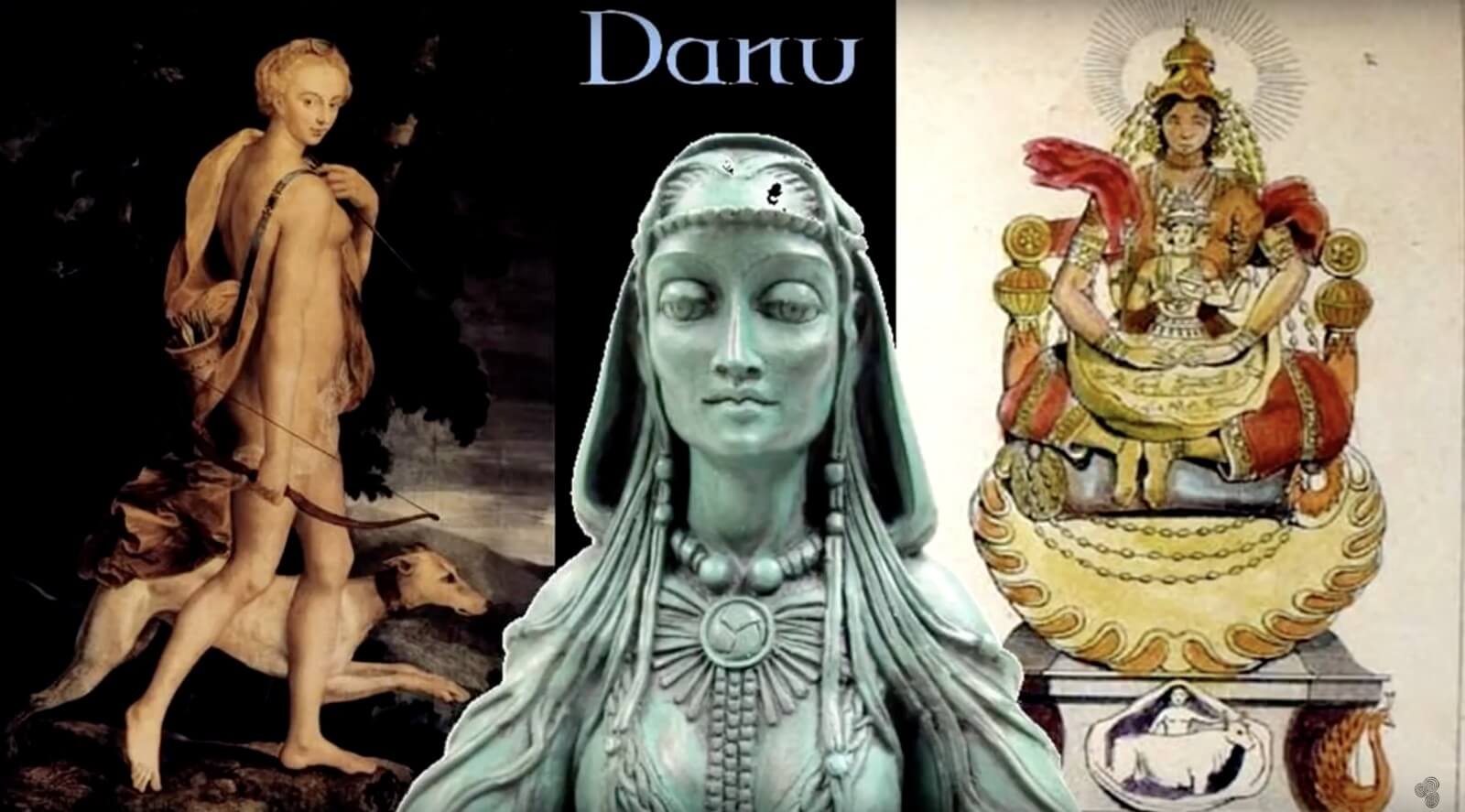 The Tuatha Dé Danann were called the Shining Ones, an ancient pre-Celtic Irish tribe, the fifth one that invaded the island in ancient times. They would later be associated with Elven or Fairy Folk, but in Irish myths, they weren’t anything like the fairies of folklore today.

This tribe was not human but described as elegant, beautiful, and even shining with light. These mysterious beings arrived with the secret knowledge of the gods. When you begin to look into their story, you begin to see a dizzying array of connections to ancient mythologies in other parts of the world.

These demi-gods arrived on ships descending from the heavens in a great mist that blocked out daylight for three days and nights. Then, they burned the ships, forcing themselves to take up residence permanently.

Tuatha Dé Danann is translated to “people of the goddess Danu,” a primordial mother goddess. This same name, Danu, or Asura is also a Hindu goddess, and the name may describe “primeval waters.” Some have drawn comparisons to the wife of Zeus, the goddess Diana, whose name was derived from the Proto-Indo-European for “(bright) sky.” She was known to the Romans as the goddess of the hunt, the Moon, and nature.

According to Mysterious Universe, there are also startling links to many other ancient mythologies, including the Nephilim of the Bible and the ancient Sumerian Anunnaki.

“The people of the Israelite tribe of Dan intermingled with the Canaanite Tuatha De Danann, also known as the Dragon Lords of Anu, said to be the offspring of the ancient Sumerian Anunnaki. This is also one of the interpretations of the Sons of God intermingling with the “daughters of men,” referenced in the Genesis chapter six story of the Nephilim.”

More about the goddess Danu and connections to the Rigveda, the oldest of the sacred books of Hinduism:

The Tuatha, described as having red hair and green or blue eyes, had superhuman abilities and skills. Ancient astronaut theorists believe this is an example of advanced extraterrestrial technology.

“They had four great treasures (or talismans) that demonstrated their skills. The first was the ‘Stone of Fal’ which would scream when a true King of Ireland stood on it. It was later placed on the Hill of Tara, the seat of the High-Kings of Ireland. The second was the ‘Magic Sword of Nuadha’, which was capable of inflicting only mortal blows when used. The third was the ‘sling-shot of the Sun God Lugh’, famed for its accuracy when used. The final treasure was the ‘Cauldron of Daghda’ from which an endless supply of food issued.”

The Shining Ones battled with the Fomhoire, another group of supernatural Irish invaders, meaning “undersea people” or “sinister supernatural beings.” They were sometimes described as half-animal and hostile. However, some of the Fomorian resembled and intermarried with the Tuatha.

In the Leabhar Gabhála Éireann, also called The Book of Invasions, the Fomhoire are identified as “descendants of Cain or of Noah’s unfilial son Ham.”

In subsequent victorious wars with the Fomhoire and the half-Fomorian Breas, who for a time ruled the Tuatha, a young hero named Lugh became the King of Ireland.

When we look at the deity called Lugh, we see more biblical references as well as connections to other mythologies in Europe.

King Lugh, the Celtic Lord of Light, is said to be a youthful sun, storm, or sky god, leads the Tuatha against the Fomorians, defeating his grandfather, the giant cyclops leader Balor. At the second Battle of Mag Tuired, he defeats Balor with a sling, which brings to mind the story of David and Goliath in the Bible. Lugh is also said to have a companion hound named Fáil Inis, whose pelt could turn the water it touched into wine.

According to Patheos, Lugh was once widely known throughout Europe.

“The Celtic namesake of Lughnasadh comes from the mythos of the god Lugh. A deity worshipped across many cultures, and nearly universally recognized by the Celts; Lugh was known throughout Europe. He is a patron of the arts, master of crafts, and known for his many diverse talents. He is equated in the writings of Julius Caesar to the popular Roman equivalent Mercury. [Greek: Hermes] The polytheists of antiquity had an interesting worldview that afforded them the capacity to recognize common attributes in various foreign deities. It was a common polytheistic belief that is stated in the writings of Julius Caesar, that the Celts worshipped the same deities as the Greeks and Romans just under different cultural names.”

Lugh’s name, it has been noted, bears similarity to the linguistic roots of the name, Lucifer.

“Interestingly, the figure of Lucifer shares many commonalities with Lugh, and other wandering gods of the sorcerers road. In a common Promethean theme, these wisdom deities bring knowledge of all the arts to mankind. Both of these deities have associations as bearers of the illuminating light of gnosis.”

Although the Tuatha Dé Danann prevailed for a time, they lost to another invader, called the Melesians. These peoples, now thought to be the Celts possibly, forced the defeated Tuatha to go underground.

According to the mythology, the Tuatha Dé Danann lived in an underground world that could only be accessed through portals. These gateways are thought to be found at megalithic structures and hills.

The Tuatha Dé Danann, once considered gods and goddesses, would be relegated to the standing of mythological fairies and fairy circles. While still respected and feared by many in the Irish countryside as real and dangerous beings, they became the stuff of modern fairytales to most people.

Although the legend of these gods and goddesses was all but lost to history, today’s interest in the Tuatha Dé Danann is coming back.

Ancient astronaut theorists see telltale signs of them in stories of the Druids, in strange megalithic structures found around the world, and even in the stories of giants by Native Americans. Those giants were sometimes said to have red hair but appeared at vast distances from Ireland and well before the known arrival of Europeans in North America.

On Season 14, Episode 7, The Druid Connection, you can find out more about the Tuatha Dé Danann, the Druids, and bizarre connections to events in North America.

Below is an in-depth discussion of the Tuatha Dé Danann: