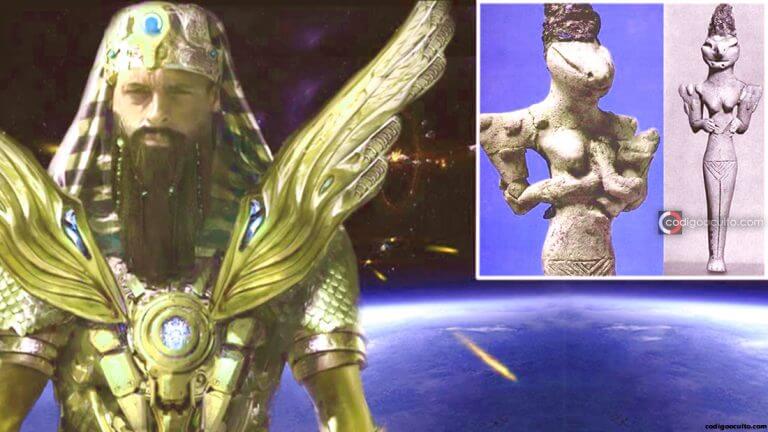 They ruled the Earth and our creators. There are many stories that have been told about the Anunnaki, but who created them? Although it sounds incredible that someone can have that answer, it seems that the person exists; Anton Parks. Let’s find out Who created the Anunnaki?

Parks is a writer and researcher who has dedicated his life, not only to study Sumerian culture, but cultures from all over the world in search of giving as true an origin as possible to what the ancient writings say, and not only «fabled theories» of other writers, such as Zecharian Sitchin , who tells us a legend where, at least, 80% of it does not appear literally in the Sumerian texts and they were «interpreted» by him.

The French mention a very old war between different Reptilian races, which would derive throughout the legend we know.

The Original Reptilians and the creation of the races

The Original Reptilians were known as Kingú, a Dragon Race that appeared in the Draco Constellation. Of all known reptilian races, these were the ones that most closely resembled humans physically. According to Parks, the Kingú were divided into 3: Greens, Reds, and Whites.

The Kingú-Babbar were the Whites, considered as the hierarchs or Kingú royalty. Nimrod, the ancient Mesopotamian king who is mentioned in Genesis, relates the Kingú-Babbar with the Aryan race of the Earth. In fact, the word «King» derives from the Sumerian «Kingú», which means «Ruler over the regions».

After its creation in the Constellation of Draco, different groups of reptilians migrated to other constellations. Being the Orion Constellation that would house more, becoming the main one.

The Usumgal, the Anunnaki creators

At some point in ancient history, the Kingú created another Dragon Race that would be known as the Usumgal. The first Seven Usumgal would be the kings of their race, however, that would not be enough. The Usumgal, over the years, wanted the place occupied by the Kingú.

These were the ones who created Musgir, known in different cultures such as Pazuzu or Gargoyles. They also created the Miminu, popularly known as “The Grays,” who had none of the common characteristics of reptiles.

In order to deal with the Kingú, the Seventh Usumgal, known as An (or Anu, according to Sumerian mythology), created the Anunna in the Pleiades. Although his first prototype, Enki, was born in the Big Dipper.

Over time, Enki would create another race known to ancient writings like the Igigi and next to them would rebel to An.

War and its consequences on Earth

The Usumgal and their army, including the Anunnas, fought against the Kingú. According to Parks, the Usumgal were those “traitorous gods” mentioned by Nimrod in the Bible and in the stories hidden by the church. In that order of ideas, the Kingú would be the Loyal Gods.

The winners of this war would be the Usumgal, consummating their victory on Earth, transforming An as the Demiurge and the seven main Usumgal as the Archons .

But this victory would have serious consequences for the Usumgal, since the star portals that linked the Solar System with the rest of the universe, known as Diranna, would be closed, leaving them trapped next to the few Kingú that still remained in the fight on Earth.

The Kingú escaped to the Abzu, which would be, according to Parks, the inner part of the Hollow Earth. There they established their own Kingdom, far from the surface. The curious thing about this matter is that the Usumgal, in time, would tell that it was they who had confined the “Demons” to the “underworld”, later known as Hell.

The Creation of the Anunnaki and the creation of humanity

The race created by the Usumgal called the Anunna, seized the Ki, also known as the Third Dimension. From that moment they began to be called the Anunna-Ki, later becoming their best-known name; Anunnaki.

In this new era, the Igigi were treated as slaves by the Anunnaki and the Usumgal because of their resemblance to the Kingú. However, these were revealed over time.

Without slaves, the Anunnaki looked at the Neanderthal prehistoric humans that already existed in Africa, so they genetically modified them to serve as slaves, adding characteristics that made them resemble the Kingú to continue their “dominion” over them.

With the passing of the generations, An again genetically modified the humans to remove them from their condition of slaves solely for work. In addition, it made them be given advanced knowledge.

The Igigi also intervened, mixing with the daughters of these new humans, giving rise to an even more intelligent and developed race, with an appearance similar to the Kingú. As mentioned in the Genesis of the Bible.

It is really extremely difficult to think of an origin for such mythical beings as the Anunnaki, mentioned in so many cultures of the world, in different ways, with different names, but with the same role as creators of humanity. Parks, it could be said, is the person who has investigated the most in different cultures, reaching a conclusion. However, this remains a theory, so it remains in each of us to believe in it or not.

You are not alone. Whether you think UFOs are black projects, extraterrestrial craft, something else altogether, or just don’t know.

1 thought on “Who created the Anunnaki?”