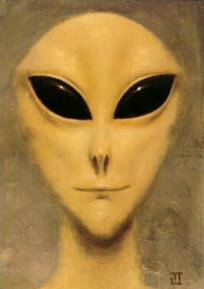 Born in Texas, USA, Whitley Strieber is famous for his horror novels “The Wolfen,” “The Hunger,” and “Communion.” He has been known for his fiction and non-fiction works, but the Communion is actually based on a real incident that happened with Strieber in the 1980s.

Strieber’s work was also featured in many movies and TV shows. He is a world-acclaimed best-selling author, but his popularity went up after his non-fiction novel “Communion” got published in 1987, which tells about the author’s encounter with non-human intelligent species. It became a big hit in Strieber’s career and was The New York Times’ No. 1 non-fiction bestseller novel.

A movie based on the “Communion” book was created in 1989, starring Christopher Walken and Lindsay Crouse.

The author’s real encounter with aliens happened on December 26, 1985, when he was sleeping alone in his cabin in the woods, upstate New York. That night, he was awakened by an unusual noise. When he opened his eyes, he saw a small alien creature approaching his bed.

The next thing he remembered was that he felt disoriented and aggressive, as he had no clue what did happen. After few months, he went through regressive hypnosis and recalled that he had been abducted and physically assaulted by someone whom he designated as “Visitors” to keep the possibility of extraterrestrials’ involvement low.

Whatever he had recalled in the hypnosis became the story of his best-selling novel. Since that night, he was full of curiosity about the unknown visitors.

Another strange incident witnessed by Streiber happened on June 6, 1988, at the Delta Chelsea Hotel in Toronto. It was 2:30 in the morning, and he woke up by the knock at the door. He thought it was room service, but there was a strange man.

Strieber said: “It was a man I described as about 5 and a half feet tall, older-looking, like someone in his 70s. He wore dark-colored clothing, a turtleneck and charcoal slacks.”

Strieber discussed this incident in his novel “The Key: A True Encounter,” published in 2000. He said the stranger stood near the window and did not move for long. He wrote everything that the strange man spoke.

“Mankind is trapped,” the stranger told Strieber. “I want to help you spring the trap.” He was not sure who this man really was, a “Master of Wisdom” or someone from a different dimension, but the one thing Strieber was sure in was that this encounter was real.

The conversation between them was about a life lesson, science, and ethics, where the stranger tried to tell him why humans had been caught in a cycle of repeat violence and self-destruction, and the small, but the very real, possibility for release.

When the author asked him about technologies, the strange man replied:

“An intelligent machine will always seek to redesign itself to become more intelligent, for it quickly sees that its intelligence is its means of survival.

At some point, it will become intelligent enough to notice that it is not self-aware. If you create a machine as intelligent as yourselves, it will end by being more intelligent.”

A lot of things happened that night in Toronto as Strieber said. He asked many questions, and the visitor told him many things in detail related to Universe and catastrophic events that occurred in the Earth’s history.

The conservation was 45 minutes long. The more the stranger spoke, the more author’s curiosity rose. At one point, Strieber wanted to ask him something else, but the stranger asked him to drink something that he was holding in his hand. He drank it without hesitating and fell asleep immediately.

The identity of the stranger has never been found out, and this incident made the author look into the future and think about where humanity is going. The stranger talked about science which is yet to be discovered by humans.

Strieber’s claim of alien abduction is still doubtful for many people, but John B. Alexander, a former Green Beret Commander and developer of weapons at Los Alamos, New Mexico said:

“For more than two decades, I have been interacting with Whitley Strieber and found him to be one of the most intelligent and thoughtful researchers in the field.”