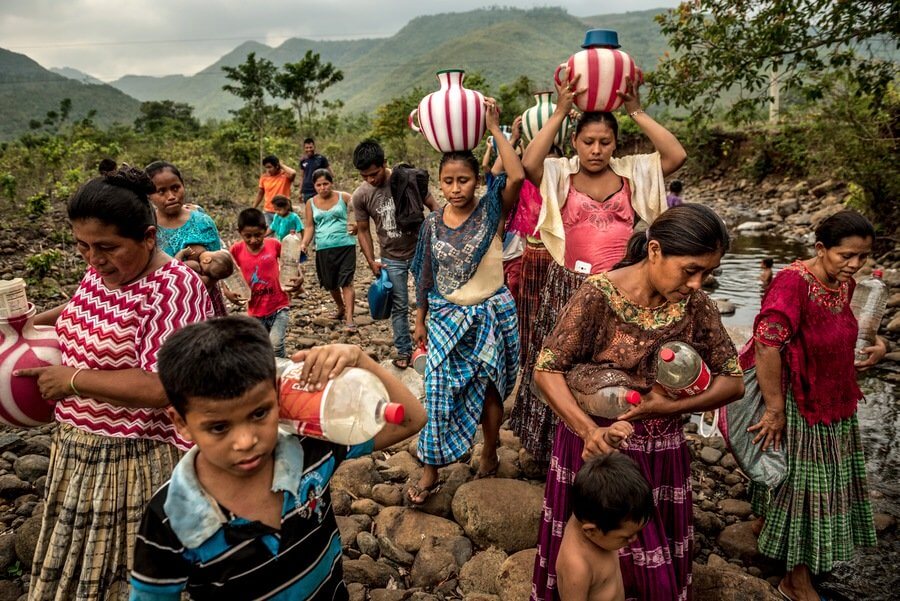 For most of human history, people have lived within a surprisingly narrow range of temperatures, in the places where the climate supported abundant food production.

As the planet warms, those regions are shifting. Entire nations will lose their ability to farm grains and vegetables.

Faced with starvation, those who can leave will have little other choice.

Human movement is hard to predict, and political battles surround any discussion of migration. This is becoming a barrier to saving lives.

That is why we are asking…

Where Will Everyone Go?

ProPublica and The New York Times Magazine, with support from the Pulitzer Center, have for the first time modeled how climate refugees might move across international borders. This is what we found.

ProPublica is a nonprofit newsroom that investigates abuses of power. Sign up to receive our biggest stories as soon as they’re published.

This article, the first in a series on global climate migration, is a partnership between ProPublica and The New York Times Magazine, with support from the Pulitzer Center. Read more about the data project that underlies the reporting.

Early in 2019, a year before the world shut its borders completely, Jorge A. knew he had to get out of Guatemala. The land was turning against him. For five years, it almost never rained. Then it did rain, and Jorge rushed his last seeds into the ground. The corn sprouted into healthy green stalks, and there was hope — until, without warning, the river flooded. Jorge waded chest-deep into his fields searching in vain for cobs he could still eat. Soon he made a last desperate bet, signing away the tin-roof hut where he lived with his wife and three children against a $1,500 advance in okra seed. But after the flood, the rain stopped again, and everything died. Jorge knew then that if he didn’t get out of Guatemala, his family might die, too.

Even as hundreds of thousands of Guatemalans fled north toward the United States in recent years, in Jorge’s region — a state called Alta Verapaz, where precipitous mountains covered in coffee plantations and dense, dry forest give way to broader gentle valleys — the residents have largely stayed. Now, though, under a relentless confluence of drought, flood, bankruptcy and starvation, they, too, have begun to leave. Almost everyone here experiences some degree of uncertainty about where their next meal will come from. Half the children are chronically hungry, and many are short for their age, with weak bones and bloated bellies. Their families are all facing the same excruciating decision that confronted Jorge.

The odd weather phenomenon that many blame for the suffering here — the drought and sudden storm pattern known as El Niño — is expected to become more frequent as the planet warms. Many semiarid parts of Guatemala will soon be more like a desert. Rainfall is expected to decrease by 60% in some parts of the country, and the amount of water replenishing streams and keeping soil moist will drop by as much as 83%. Researchers project that by 2070, yields of some staple crops in the state where Jorge lives will decline by nearly a third.

Scientists have learned to project such changes around the world with surprising precision, but — until recently — little has been known about the human consequences of those changes. As their land fails them, hundreds of millions of people from Central America to Sudan to the Mekong Delta will be forced to choose between flight or death. The result will almost certainly be the greatest wave of global migration the world has seen.

In March, Jorge and his 7-year-old son each packed a pair of pants, three T-shirts, underwear and a toothbrush into a single thin black nylon sack with a drawstring. Jorge’s father had pawned his last four goats for $2,000 to help pay for their transit, another loan the family would have to repay at 100% interest. The coyote called at 10 p.m. — they would go that night. They had no idea then where they would wind up, or what they would do when they got there.

From decision to departure, it was three days. And then they were gone.

For most of human history, people have lived within a surprisingly narrow range of temperatures, in the places where the climate supported abundant food production. But as the planet warms, that band is suddenly shifting north. According to a pathbreaking recent study in the journal Proceedings of the National Academy of Sciences, the planet could see a greater temperature increase in the next 50 years than it did in the last 6,000 years combined. By 2070, the kind of extremely hot zones, like in the Sahara, that now cover less than 1% of the earth’s land surface could cover nearly a fifth of the land, potentially placing 1 of every 3 people alive outside the climate niche where humans have thrived for thousands of years. Many will dig in, suffering through heat, hunger and political chaos, but others will be forced to move on. A 2017 study in Science Advances found that by 2100, temperatures could rise to the point that just going outside for a few hours in some places, including parts of India and Eastern China, “will result in death even for the fittest of humans.” Sign up to get ProPublica’s major investigations delivered to your inbox. This site is protected by reCAPTCHA and the Google Privacy Policy and Terms of Service apply.

People are already beginning to flee. In Southeast Asia, where increasingly unpredictable monsoon rainfall and drought have made farming more difficult, the World Bank points to more than 8 million people who have moved toward the Middle East, Europe and North America. In the African Sahel, millions of rural people have been streaming toward the coasts and the cities amid drought and widespread crop failures. Should the flight away from hot climates reach the scale that current research suggests is likely, it will amount to a vast remapping of the world’s populations.

Migration can bring great opportunity not just to migrants but also to the places they go. As the United States and other parts of the global North face a demographic decline, for instance, an injection of new people into an aging workforce could be to everyone’s benefit. But securing these benefits starts with a choice: Northern nations can relieve pressures on the fastest-warming countries by allowing more migrants to move north across their borders, or they can seal themselves off, trapping hundreds of millions of people in places that are increasingly unlivable. The best outcome requires not only goodwill and the careful management of turbulent political forces; without preparation and planning, the sweeping scale of change could prove wildly destabilizing. The United Nations and others warn that in the worst case, the governments of the nations most affected by climate change could topple as whole regions devolve into war.

The stark policy choices are already becoming apparent. As refugees stream out of the Middle East and North Africa into Europe and from Central America into the United States, an anti-immigrant backlash has propelled nationalist governments into power around the world. The alternative, driven by a better understanding of how and when people will move, is governments that are actively preparing, both materially and politically, for the greater changes to come.

Last summer, I went to Central America to learn how people like Jorge will respond to changes in their climates. I followed the decisions of people in rural Guatemala and their routes to the region’s biggest cities, then north through Mexico to Texas. I found an astonishing need for food and witnessed the ways competition and poverty among the displaced broke down cultural and moral boundaries. But the picture on the ground is scattered. To better understand the forces and scale of climate migration over a broader area, The New York Times Magazine and ProPublica joined with the Pulitzer Center in an effort to model, for the first time, how people will move across borders.

We focused on changes in Central America and used climate and economic-development data to examine a range of scenarios. Our model projects that migration will rise every year regardless of climate, but that the amount of migration increases substantially as the climate changes. In the most extreme climate scenarios, more than 30 million migrants would head toward the U.S. border over the course of the next 30 years.

Migrants move for many reasons, of course. The model helps us see which migrants are driven primarily by climate, finding that they would make up as much as 5% of the total. If governments take modest action to reduce climate emissions, about 680,000 climate migrants might move from Central America and Mexico to the United States between now and 2050. If emissions continue unabated, leading to more extreme warming, that number jumps to more than a million people. (None of these figures include undocumented immigrants, whose numbers could be twice as high.)

The model shows that the political responses to both climate change and migration can lead to drastically different futures.

In one scenario, globalization — with its relatively open borders — continues.

As the climate changes, drought and food insecurity drive rural residents in Mexico and Central America out of the countryside.

Then they move farther north, pushing the largest number of migrants toward the United States.

We modeled another scenario in which the United States hardens its borders. People are turned back, and economic growth in Central America slows, as does urbanization.

In this case, Central America’s population surges, and the rural hollowing reverses as the birthrate rises, poverty deepens and hunger grows — all with hotter weather and less water.

That version of the world leaves tens of millions of people more desperate and with fewer options. Misery reigns, and large populations become trapped.

As with much modeling work, the point here is not to provide concrete numerical predictions so much as it is to provide glimpses into possible futures. Human movement is notoriously hard to model, and as many climate researchers have noted, it is important not to add a false precision to the political battles that inevitably surround any discussion of migration. But our model offers something far more potentially valuable to policymakers: a detailed look at the staggering human suffering that will be inflicted if countries shut their doors.

In recent months, the coronavirus pandemic has offered a test run on whether humanity has the capacity to avert a predictable — and predicted — catastrophe. Some countries have fared better. But the United States has failed. The climate crisis will test the developed world again, on a larger scale, with higher stakes. The only way to mitigate the most destabilizing aspects of mass migration is to prepare for it, and preparation demands a sharper imagining of where people are likely to go, and when.