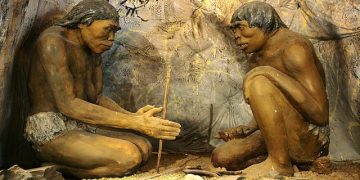 For decades, archaeologists have agreed that Homo sapiens were the first to create and use fire some 400,000 years ago, marking a profound turning point in the cultural aspect of human evolution because it provided a source of warmth and protection.

But new data from a team of researchers at the University of Connecticut, working in conjunction with colleagues from Armenia, the United Kingdom, and Spain suggests that early humans such as Neanderthals also controlled fire and had mastered the ability to generate it.

A new article from those researchers has just been published in Scientific Reports, and what it suggests could drastically change our overall understanding of early man:

“‘Fire was presumed to be the domain of Homo sapiens but now we know that other ancient humans like Neanderthals could create it,’ says co-author Daniel Adler, associate professor in anthropology. ‘So perhaps we are not so special after all.’”

The work of this team from the University of Connecticut includes archaeological, hydrocarbon, and isotope evidence of human interactions with fire, along with what the climate was like on Earth thousands of years ago.

For proof of their theory, the team went to Armenia, where they closely examined Lusakert Cave in the highlands of the country. Gideon Hartman, associate professor of anthropology, and study co-author noted that the hope was to better understand the true history of man and fire:

“Fire starting is a skill that has to be learned — I never saw anyone who managed to produce fire without first being taught. So the assumption that someone has the capability to set fire at will is a source of debate.”

Looking at sediment samples, the research team was able to determine the abundance of polycyclic aromatic hydrocarbons (PAHs), which are released when organic material is burned:

“One type of PAH called light PAHs, disperse widely and are indicative of wildfires while others, called heavy PAHs, disperse narrowly and remain much closer to the source of fire.

“‘Looking at the markers for fires that are locally made, we start to see other human activity correlating with more evidence of locally-made fire,’ says lead author Alex Brittingham, a UConn doctoral student in anthropology.”

But the researchers also had to try and eliminate the possibility that weather may have caused the fires which were showing up in the scientific data they found in and around the Armenian cave. Once they could eliminate that possible explanation, they would be closer to proving that man did indeed begin using fire far ahead of the established timeline.

After rigorous testing, a conclusion was reached:

“They could not find any evidence of a link between overall paleoclimatic conditions and the geochemical record of fire, says Michael Hren, study author and associate professor of geosciences.

“‘In order to routinely access naturally caused fires, there would need to have been conditions that would produce lighting strikes at a relative frequency that could have ignited wildfires,’ says Hren.”

With that question answered, the team was able to conclude that early humans before Homo sapiens did indeed have the ability to build and control fire, overturning the long-held beliefs that have guided the scientific community for decades.

The next step is to look at other caves and see what clues they may contain:

“Brittingham is now applying the same research techniques to analyze other caves occupied by early humans. He is currently working with a team in Georgia, among other locations, to determine whether fire was developed independently by groups in different geographic areas.

“‘Was it something that people in Armenia could do but people in France could not do? Was it developed independently?,’ asks Brittingham.”

The questions are endless, but they give us even greater insight into our ancient ancestors and how they acquired much of the knowledge that we now take for granted.

This video on how man tamed fire helps explain this most important step in human evolution.