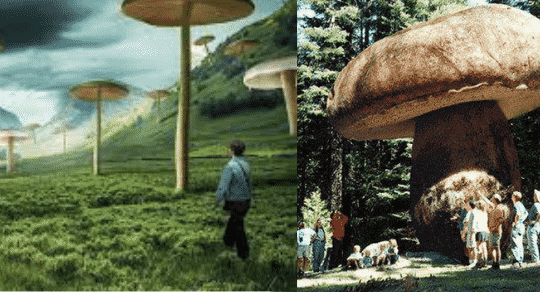 PBS Eons
420 million years ago, a giant feasted on the dead, growing slowly into the largest living thing on land. It belonged to an unlikely group of pioneers that ultimately made life on land possible — the fungi.

Mushrooms are easily one of the most fascinating natural creations. There are neither plants nor they are animals, and they are actually closer to humans than plant matter. Some species of mushrooms have been found eating up and clearing up plastics, heavy metals and radiation from the Earth. Many have medicinal and even cancer-killing properties. Based on their unique traits, scientists theorize that mushrooms came from out of space. Their living spores have been found in every level of earth’s atmosphere, and they can likely travel far through space.

The magic mushrooms can sometimes give a person a mental and spiritual experience as if they are traveling through space. The largest mushroom existing today lives underground in the Malheur National Forest of Oregon; it stretches out 3,726563 m2 and is estimated to be 8,650 years old. And speaking of old mushrooms, the oldest one ever found in fossil form is 440 million years old. That is exactly the age when the giant mushrooms also ruled the Earth.

It was around 420 million years ago that Earth was not covered in trees and did not yet have giant insects. The plant life at the time was only about a foot or two tall. Instead of giant trees and animals, the planet was covered by giant mushrooms. They rose above the ground at over 20 feet tall and three feet wide.

“A 6-metre fungus would be odd enough in the modern world, but at least we are used to trees quite a bit bigger,” says Boyce. “Plants at that time were a few feet tall, invertebrate animals were small, and there were no terrestrial vertebrates. This fossil would have been all the more striking in such a diminutive landscape,” New Scientist wrote in 2007.

That makes it less surprising to find that underground fungus in Oregon that became the biggest living organism on Earth.

“It’s bigger than an elephant, bigger than a blue whale, the largest organism on earth may not be what you expect,” writes National Geographic.

What are These Giant Mushrooms?

The first paleontologist to research them was John William Dawson in 1859, and the existence of giant mushrooms was officially confirmed in 2007 in journal Geology.

The scientific name for them is Prototaxites or giant fungi without caps and with tubes that are trunk-like. They lived in the Silurian Period, and at the time there was such an abundance of bacteria in the soil that it was fruitful for these mushrooms.

Cryptobiotic soil was made up of not only bacteria but also moss, algae and lichens. Much of the land was covered in this soil, and the soil became the perfect environment for giant mushrooms.

These giant mushrooms are likely what gave life to plants and trees. The mushrooms secreted acids that dissolve rocks and extracted nutrients that the plant life needs to exist.
The world they lived in would look very strange to use today, and can be only conceived in Sci-Fi movies. There were no trees or dinosaurs, no flying insects. All there was were these giant mushrooms and a few primitive wingless insects, fish, and worms.

After existing for 50 million years, the giant mushrooms went extinct about 350 million years ago, and the reason is still unknown. Today we find their fossils, and ever since the first one was found in the mid-19th century, we find more and more to learn.

What If Giant Mushrooms Existed Today?

We know that mushrooms do a lot of good to clean up the Earth. If the giant ones existed, could they have helped?

It is true that in theory bringing giant mushrooms back could help solve pollution. However, we cannot know if they would be poisonous to us like at least 300 out of 1.5 million fungi species are today. They could also eat up all the nutrients and completely change the ecosystem today. They could absorb all the oxygen that we need as they also “breathe out” carbon dioxide like humans.
And finally today’s world may not have enough for them to survive.

It is possible that plants competed with them for nutrients when they became abundant, and were the giant mushrooms’ downfall. That would likely still be the result today.

Would you want to live in a world with giant mushrooms?