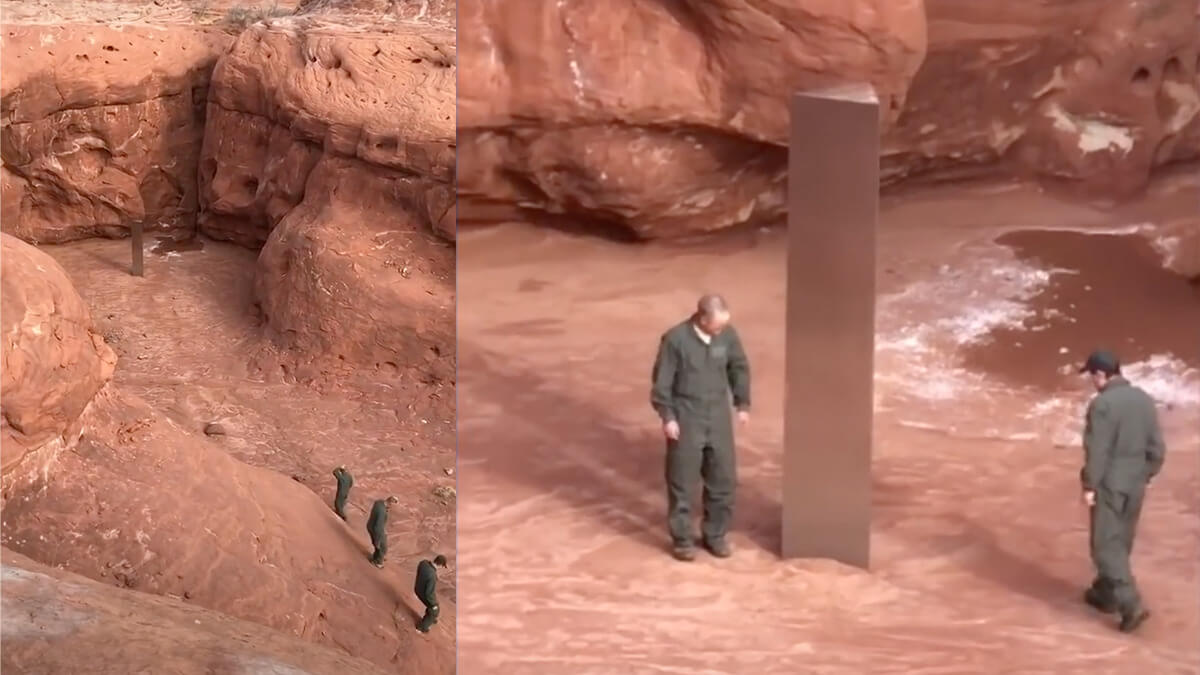 Today, many of us wondering, why do we see stories of monoliths almost daily?

After an excruciating year of divisive politics and a global pandemic, entering a new year is a relief. As if to mark the welcome changes to come, stories of metal monoliths have been a lighthearted distraction. All over the world, the anomalies have been appearing and disappearing.

It started on November 18, 2020, in Utah’s “Red Rock” Country. A state employee counting wild sheep in a helicopter spotted a 3-sided metal monolith standing 10 to 12 feet tall in a remote area of public lands in southeastern Utah. By November 27, the monolith disappeared, and only a triangular piece of metal that used to be on top remained.

See the Utah monolith via the Guardian below:

Later, a video via Instagram indicated four men removed the structure, saying they wanted to discourage a flood of traffic to the area. Nevertheless, a Reddit user soon pinpointed the probable coordinates to the inhospitable canyon location. Using Google Earth, it seems the unauthorized monolith could have been in place since 2016.

Monoliths Appear All Over the World

From the get-go, people on social media compared the story to the monolith in the movie 2001: A Space Odyssey. From there, similar monoliths began appearing all over the world, starting in Romania on November 27. There are so many appearances that Monolith tracking has become a thing. Daily, there are more, but as of December 20, the count was at 87 globally.

Overall, the incidences appear to be unrelated copycats. In some cases, the creators came forward to take credit, and journalists have pointed out it may be part of a viral marketing scheme.

While many monoliths, like the recent 7-foot-tall “Gingerlith” monolith in San Francisco, are pranks, others remain mysterious.

Welcome Distraction in a Dismal Year

Why did so many people catch monolith mania this year? For a group of men in Australia, it was a way to escape the otherwise dismal news.

“We thought, ‘Oh, 2020 is such a dire year,’ so we decided to do something about it,” said prankster artist Alex Apollonov.

Apollonov and a group of friends hired builders for the monolith they placed in Melbourne.

“If you know ‘2001: A Space Odyssey,’ you know there were three monoliths,” Kenney told Insider. “I’m like, you know there’s gonna be a third. It’s gonna happen. So why don’t we build it?”

The monolith was a fun way to generate some excitement.

“Everybody’s been kind of just in a shit world,” said Kenney. “Our town got super excited about it.”

The classic movie from the summer of 1968 was far ahead of its time. Now, it’s suddenly back in the spotlight, thanks to all those monoliths. Thus, many of us are wondering, what did the monolith represent in the Stanley Kubrick film?

Spoiler alert: If you haven’t seen the film, you might not want to continue.

In the movie, monoliths are central to the story. First, the US government discovers a monolith on the Moon in 2001. It’s found buried 40 feet below the surface.

The monolith, dubbed Tycho Magnetic Anomaly One, or TMA-1, emitted a magnetic field. After a group of astronauts tried taking a selfie in front of it in the Tycho crater, a ringing noise drove them away.

When people discovered TMA-1, it alerted extraterrestrials called the Firstborn, letting them know we had left Earth, suggests Fandom.

Four million years ago, the Firstborn conducted experiments in many star systems. Now, they are alerted humans have progressed and are ready for space travel.

After the discovery, four monoliths appear, with different functions.

In one scene, a group of chimpanzees congregates around the monolith called “New Rock.” It’s thought the monolith is the catalyst that rapidly evolves man’s intelligence.

After sunlight touched TMA-1, a chain of events took place. People detected that TMA-1 was sending a signal to a “Big Brother” monolith orbiting Jupiter. This massive monolith is dubbed the Jovian or Jupiter monolith.

While the crew sleeps, a talking supercomputer, HAL 9000, takes the helm, eventually turning on the human crew.

Now the self-replicating monoliths began forming enormous clouds to create Lucifer, a small sun. TMA-2 functioned as a Stargate, attracting thousands of other monoliths, which eventually merged with Jupiter to form the sun.

Once created, Lucifer would sustain new life on Jupiter’s moon, Europa. However, the monoliths later became intent on wiping out the human race to protect life on Europa.

After 1,000 years, the monoliths were back and ready to deal the death blow. They formed two clouds to block out light from the Sun on Earth and from Lucifer to a human base on Ganymede. In response, humans unleashed a computer virus to destroy the monoliths.

What Does it All Mean?

If we look at 2001: A Space Odyssey, it’s a lesson about the creation of the universe not constrained by any religion. The monoliths ultimately represent a god figure, the work of incomprehensibly advanced beings.

Kubrick’s film was a masterwork with a mysterious, thought-provoking, and ambiguous ending. The evocative film saught to evoke and “open up” and inspire the mind, not give definitive answers.

The only human survivor of the trip to Jupiter, Dave Bowman, overcome HAL’s dangerous AI. Then, he makes it to Jupiter and enters the Stargate.

From there, Bowman is kept in a sort of “human zoo” by godlike beings of pure energy and spirit. Upon death, he transforms into a superhuman Star Child.

Kubrick once said the advanced aliens in the film would seem like gods to humans as we might appear godlike to an ant.

As the Star Child heads back to Earth, a new enlightened era can begin.

See more in the synopsis from The Take below:

A Shift in Worldview

In 2018, computer scientist Stephen Wolfram described how the Kubrick film had correctly predicted some aspects of the future half a century earlier. Today, developments in advanced AI and routine space travel seem to be on the horizon.

For Wolfram, the monoliths might, by their very appearance alone, inspire evolution.

“No ape 4 million years ago had ever seen a perfect black monolith, with a precise geometrical shape. But as soon as they saw one, they could tell that something they had never imagined was possible. And the result was that their worldview was forever changed. And—a bit like the emergence of modern science as a result of Galileo seeing the moons of Jupiter—that’s what allowed them to begin constructing what became modern civilization,” wrote Wolfram.

Humans Have Become the Aliens

For American journalist Jody Rosen, the monoliths signal the tombstone of a terrible year. However, they are symbols of our alienation from the world due to the pandemic. As we look at the new year ahead, we are all hoping to enter a new, more enlightened era.

“It is too early to know if the homemade monoliths rising in streets and parks around the world are totems of a passing craze or lasting landmarks in the making. But it is surely not a stretch to read symbolic significance in their proliferation at the end of the most dreadful year in living memory: a collective desire to mark a transition, to post figurative headstones commemorating the demise of 2020,” write Rosen.

As in the Kubrick film, humans ultimately become extraterrestrials.

“Or perhaps the better metaphor comes from the Kubrick movie. The year has turned us, earthlings, into aliens, wanderers on an unfamiliar planet. Who among us doesn’t want to leave this place behind and go hurtling through space-time, into a new year, and back to another world?” writes Rosen.

Ultimately, marking the end of 2020 with a sighting of worldwide Kubrick-inspired monoliths seems hopeful. They signal that we’ve never been more collectively ready for change, progress, and evolution. We’re entering a crossroads where we can choose our path.

Perhaps the monolith appearance alone is all that’s required to inspire a new worldview? One which will help us realize new possibilities as we face many new challenges ahead?