California Man is Besieged By “Occupants”

camp. One of the men, who will be referred to hereafter as, “Mr.X” (at his request), came to the end of the ridge, found a sheer drop and has to retrace his steps and attempt to descend to camp along another route. At that time it was getting dark and Mr. X shortly found that he was lost.

Shortly thereafter, Mr. X saw a bright light descend out of the sky in a glide path and land beyond the crest of the ridge. He at first thought it was a helicopter coming to rescue him but he heard no sound, and decided it might have been a meteor despite its slow speed. Shortly he realized his mistake when he heard sounds of something approaching from the direction of the object, whose lights he could now see. He went back up his tree and watched as two “space-suit” clad figures walked over to the base of the tree followed by a “something” which he referred to as a “robot” in his report, which seemed to float rather than walk, would go over rather than around bushes, etc. 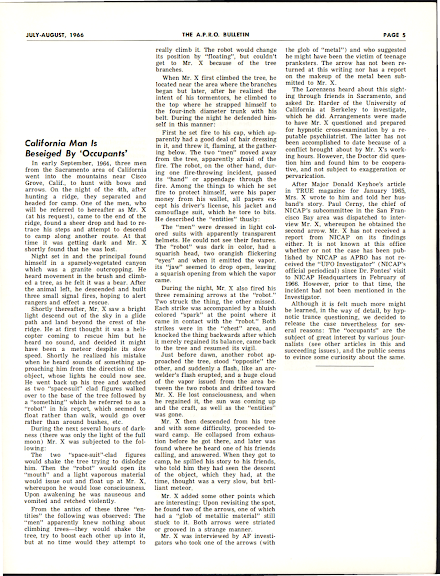