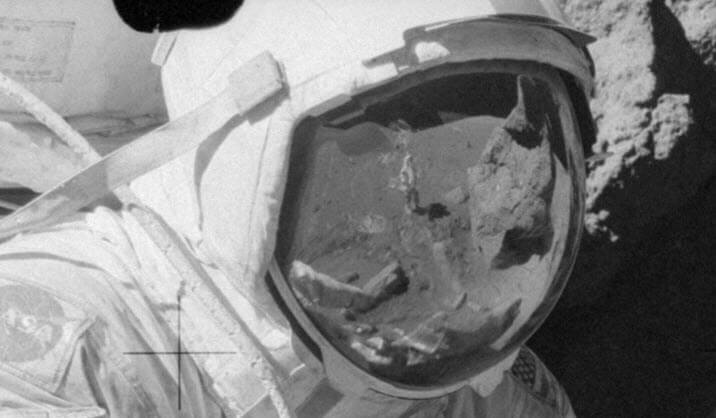 This official NASA picture hides some Official Apollo 17 Photo that raises many questions. Did we really go to the Moon or are we not being told the truth about what is on the Moon? The picture coming from the Apollo 17 mission is available on spaceflight.nasa.gov and official NASA site dedicated to some of NASA´s space programs.

The tripod-like object just outside the shaded area is the gnomon and photometric chart assembly which is used as a photographic reference to establish local vertical sun angle, scale and lunar color. The gnomon is one of the Apollo Lunar Geology Hand Tools. While astronauts Cernan and Schmitt descended in the Lunar Module “Challenger” to explore the moon, astronaut Ronald E. Evans remained with the Apollo 17 Command and Service Modules in lunar orbit.

If you zoom-in the picture (see below) to the astronaut´s visor you will notice the reflection of a human figure. It is evident that this person is not wearing the expected Moon equipment; the uniform is less bulky and it is clear that there are no oxygen tanks. Also, it does not look like this person is the one taking the photo. There is no visible camera and both arms are on the sides; feet are not facing the supposed subject of the photo but towards a rock. It seems more as if this person is “casually” observing.

So what does this mysterious indicate? Maybe the picture was not taken on the moon. Or maybe, there was another species on the Moon at the same time as the Apollo 17 mission. If this figure is that of a human being It could indicate that someone, some nation has more advanced technology than what the official NASA mission are using. Some also speak of a more advanced secret parallel space program. Could this person belong to that secret space program?