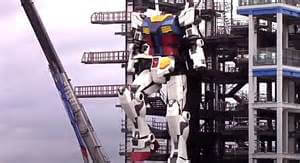 Japanese engineers have been working hard at turning a colossal mecha robot from its popular sci-fi franchise “Gundam” into a reality. Elias Marat

– Japanese engineers have been working hard at turning a colossal mecha from its popular sci-fi franchise “Gundam” into a reality.

In January, engineers from Gundam Factory Yokohama announced that they were going to build the full-sized, advanced humanoid robot based on the RX-78-2 Gundam, a giant robot fashioned after a samurai that was originally introduced in the iconic 1979 anime series by Yoshiyuki Tomino.

And while construction has hit a snag in the form of the COVID-19 pandemic, a recent video shows that the Gundam project has been striding forward –  as evidenced by footage of the towering mecha take its very first steps at its base in the Port of Yokohama, just south of Tokyo.

The video shows engineers working on the robot using a crane while the Gundam lifts its legs and rotates its humongous torso. However, the massive mecha is still missing its head.

Once completed, the robot will weigh roughly 25 tons – about four times the weight of a large elephant – and will have 24 degrees of freedom, ensuring its ability to walk wherever it pleases, reports Popular Mechanics.

The mecha will also have an advanced hand stretching 6.5 feet with fully functioning fingers and thumbs.

Developers have been using the open source Robot Operating System (ROS) and Gazebo simulation software to develop the robot, and the Yokohama team has also released a virtual copy of the robot that accurately simulates how the motors, gears, an sensors of the towering machine actually work.

Gundam Factory Yokohama had initially announced that it would preview its epic creation this summer at Yamashita Pier during weekend events complete with shops, a robotics lab, and a Gundam-themed café. However, concerns over the ongoing public health emergency led to the event’s cancellation.

Likewise, the robot’s unveiling to the public which was slated to occur in October has also been pushed back, according to the company’s official website.

This isn’t the first time that lead designer Masaki Kawahara has worked on a full-sized 60-foot tall Gundam robot. Kawahari has actually built three other life-sized Gundam mechas. This includes a towering RX-0 Unicorn Gundam replica from the Mobile Suit Gundam Unicorn series, which is parked in front of DiverCity Tokyo Plaza and has moving light panels, shifting armor plates, and the ability to switch into Destroyer mode.

However, the current model is the first that will be able to walk and has fully-functioning appendages.

Yoshiyuki Tomino’s Gundam series is one of the most celebrated and recognizable Japanese pop culture icons of the past four decades since Mobile Suit Gundam debuted in 1979. Filled with massive and sleek-yet-blocky mecha robots who fought each other with swords and advanced gun blasters, Gundam spawned a massive manga, anime, plastic model franchise and videogame franchise.

And as New Atlas reports, the samurai-like mecha hasn’t only spawned nearly 50 official TV series and films, but has also served as the main inspiration for Western properties including Transformers, Pacific Rim, Voltron, MegaBots, and Real Steel – not to mention popular Japanese mecha franchises including Patlabor and Neon Genesis Evangelion.

The life-size iteration of the iconic RX-78-2 Mobile Suit Gundam piloted by Ray Amuro weighs roughly 25 tons, and is currently being built at the Gundam Factory Yokohoma in Japan as we speak. It is a fully life size animatronic Gundam at 18 metres tall which is roughly as big as the first Gundam at Gundam Base Tokyo.