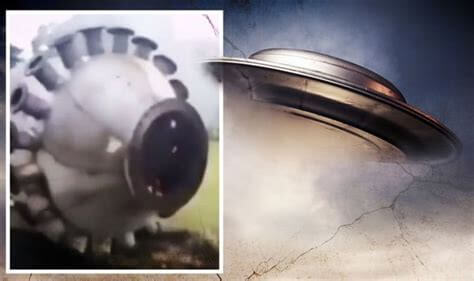 By Tim BinnallA puzzling piece of footage circulating online shows a massive mysterious object that crashed to the ground in the Dominican Republic. A video from the aftermath of the weird incident was posted to YouTube on October 8th and the description indicates that the curious event took place earlier that day. Where, exactly, in the country the curious crash occurred is uncertain as are most other details surrounding the case.

In the footage, a group of bewildered bystanders surround the object which appears to be metallic, sports a series of nodules, and sits in a cloud of smoke. Within the top of the downed oddity, one can a fire still burning. Although the witnesses can be seen filming the object with their cell phone, they largely avoid getting too close to it, which is understandable given its inexplicable origin and possibly combustible nature.

As for what the weird object could have been, while some UFO enthusiasts have suggested that it is a crashed craft of some kind, a more plausible possibility is that it is either a piece of space junk or perhaps part of an airliner that somehow wound up plummeting to the ground. Can you identify the weird mystery object? Share your best guess with us at the Coast to Coast AM Facebook page.