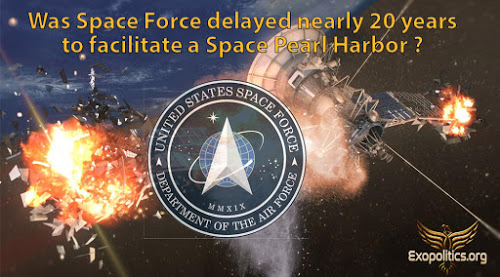 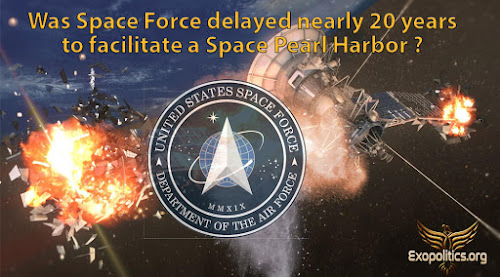 Was Space Force delayed nearly 20 years
to facilitate a Space Pearl Harbor?
The recently established United States Space Force is widely considered to be the brainchild of President Donald Trump, which has subsequently aroused suspicion, if not outright opposition, by those believing it to be a grandiose vanity project with no genuine national security significance. However, the first proposal for a Space Force dates back to a bipartisan “Space Commission” established during the Clinton administration that delivered a detailed report on January 11, 2001, recommending a new military space service to be called “Space Corps”. The chief goal of the Space Corps would be to prevent a future “Space Pearl Harbor”.

What is even more intriguing in tracking the historical origin of Space Force is that the Space Commission was headed by Donald Rumsfeld, a former Secretary of Defense (1975-1977), who has a mysterious history in UFO investigations, the study and reverse engineering of captured extraterrestrial technologies, and in recruiting individuals for secret space programs. Rumsfeld’s leadership of the Space Commission, and his second appointment as Secretary of Defense (2001-2006) under President George Bush, led to Commission members believing that legislation for creating a Space Force was imminent.

What happened eight months later completely derailed any hope for prospective legislation creating a Space Corps, the September 11 attack, which evidence suggests was a false flag attack orchestrated by the Deep State. Only a day earlier, Rumsfeld had admitted on live T.V. that the Pentagon couldn’t properly account for a missing 2.3 trillion dollars. This had led to much speculation whether one of the motivations for the September 11 attack was to prevent serious investigations into the missing trillions.

For the rest of Dr. Salla’s article:
https://exopolitics.org/was-space-force-delayed-nearly-20-years-to-facilitate-a-space-pearl-harbor/

Posted by UFOs-Disclosure at Thursday, October 01, 2020