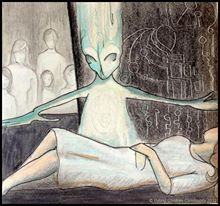 By now almost everyone has heard the story or watched the movie War of the Worlds. We all know how it ends. The evil invading aliens are killed off because they get infected with the cold virus. It is true that aliens would not have a built-up immunity to our viruses hear on Earth. The only problem with the story is that aliens are not nearly that ignorant. They know that there are deadly viruses and bacteria on our planet. One reason that aliens are abducting people has to be because they are using humans to make vaccines.

Anyone that has ever done some traveling knows that you have to take a massive amount of vaccines when you visit certain parts of the world. This is because some countries still have viruses that have been wiped out in America. Imagine how many vaccines you would need if you were going to visit another planet. It could take years, if not generations, for us to build up the necessary immunity needed to safely visit another world.

As humans explore the galaxy we will eventually find another Earth-like planet. One of the first things that we would do when we find this planet will be to try and detect things like viruses. Aliens would do the same thing. Almost all alien abductees report aliens performing experiments on them. While there could be many reasons for these experiments, creating vaccines is one of the most logical. Aliens would need to keep track of any and all deadly pathogens on Earth. They are constantly updating this information so that they can use our planet safely.

Alien Vaccines Will Ensure Their Dominance Of Earth

Many of us believe that we are not alone on this planet. By that, I mean that there is another advanced form of life here other than humans. It is hard for us to accept the fact that we are not at the top of the food chain. Unfortunately, that does not change the truth. Aliens have been visiting and living on Earth for thousands of years. Research has shown this.

If aliens decided to attack humans there wouldn’t be much that we could do about it. Our weapons wouldn’t be nearly as advanced as theirs. They would be far more intelligent than we are. And I’m sad to say that the common cold wouldn’t save our butts in the end. An advanced life form of aliens will definitely have vaccines. People always want to know why things like cow mutilations and alien abductions happen. They wonder “what would the aliens gain from doing such things”. Well, there are a lot of viruses to keep up with here on Earth and the aliens are always one step ahead of us.

Aliens Could Be Protecting Us From Their Viruses

The flip side of this argument is that aliens could be protecting us from their viruses. Chances are good that aliens have germs, bacteria, and viruses on their home planets. They know that people would die if they were exposed to their viruses, so they could be creating vaccines for us. Maybe they don’t want to harm humans so they have figured out a way to vaccinate us all. Some human abductions may be them checking on how well that process is working. They could also be trying out new vaccines on abductees.

When thinking about aliens it is easy to overlook something as small as a virus. While they are small they are still very important. Literally life and death. I promise that our alien visitors don’t overlook them.