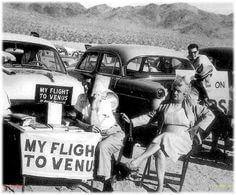 The era of the 1940s, 50s, and 60s was full of alien stories, UFO encounters, and alien abductions. Roswell, Betty & Barney Hill, and Geroge Adamski’s cases are some of the most famous stories widely acknowledged by people who have a great interest in aliens. In the 1950s, a man named Buck Nelson claimed that he had gone to Mars, the Moon, and Venus in a spaceship with two extraterrestrials.

Buck Nelson was born in Colorado on April 9, 1895. He spent most of his life on farms and even bought 80 acres of land in the Ozark Mountains, Missouri. In his book “My Trips To Mars, The Moon, And Venus,” he wrote that his first extraterrestrial encounter occurred in April 1954 over his house in the Ozark mountains. Nelson explained that it had started when his radio began to act weird. His dog was outside and barking. To check the situation, he stepped outside and found himself in a shocking state when he saw a big disc-shaped spacecraft, accompanied by two small UFOs. He rushed inside his home to bring a camera and took photographs of the flying saucers but managed to grab only the two discs in the photo.

What happened next was not lesser than a miracle for Nelson. He flashed his torch toward the disc and signaled them to come down. But in response, a bright light hit him and he fell behind the barrel. He felt paralyzed until the UFOs left. After this strange encounter, he found out that his eye vision improved as he stopped using spectacles for reading. Besides, he claimed that his pain in muscles and back cured.

After his first UFO sightings, on March 5, 1955, he was visited by three strangers, including two extraterrestrials from Venus and one human, and a giant dog named Bo. It was midnight and they spent an hour at Nelson’s house. They examined his place and were interested in the power source of his radio. Later, Nelson discovered that those aliens from Venus use solar power as their energy source and forces between Sun and planets. Even before leaving, they told him that someday they would take him on a trip in outer space.

Ken Steinhoff, a retired newspaper photographer and writer shared his personal story about his visit to Buck Nelson’s Spacecraft Convention that took place in the summer of 1966. At that time, Buck Nelson was in his 70s and had been organizing the convention since 1954 after his early sightings.

Steinhoff wrote that a man named James Hill, who called himself Nelson’s close friend, said that they had previously lived in California and before retirement, Nelson worked as a police detective. Hill himself served in the US Army and fought in World War.

Hill said that Nelson and his dog Ted had been taken by “Space Brothers” for a trip to other planets. He first flew to Mars, then to the Moon and in the end, to Venus. He personally saw the “Space Brothers,” describing them as more than 6 feet tall with black beards.

Nelson described Mars as a colorful place, similar to Earth, and there lived people of different colors and races. Venus was a peaceful place with no need for police administration. The Moon was described as a base for manufacturing rocks for old planets.

According to Hill, the purpose of Space People’s visits was to convey a message to Earth scientists to stop experimenting with hydrogen and atom bombs as it could destroy the universe.

“When the spacemen first contacted Mr. Nelson, Mr. Hill noted, they said, “You have a mission and you will be told more as we want you to know.” Since that time, Mr. Hill said he has learned much.”

Some fascinating things told by Hill about the space brothers were:

1. They traveled at high speeds in different types of spacecraft;
2. They did not want anything from Earth, just only to stop scientists from building nuclear bombs;
3. Many of those Space People had been on Earth for long and lived among people. Thousands of them even worked in the US space program to watch over the scientists and stop them if they got too far.

To prove himself correct, Nelson also sold the black hairs of dog Bo at his conventions. But on finding the similarity of Bo’s hairs with earthly dogs, Nelson said “Dawgs is dawgs. Don’t matter what planet they’re from.”

Although Nelson achieved big fame after publishing his story and holding conventions, he did not become as famous as other alien contactees. He died in 1982.