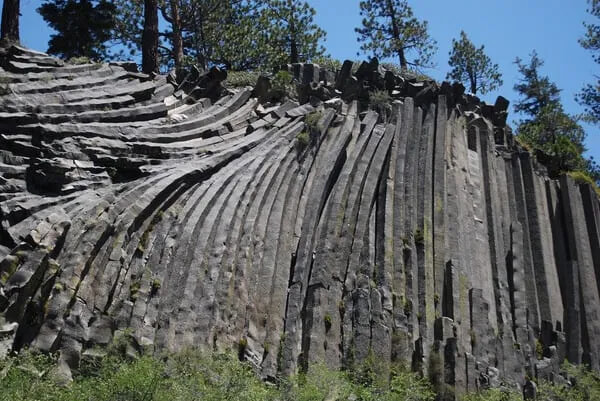 Baigong pipes are considered to be one of the biggest mysteries to date. They were found inside a pyramid at the top of Mount Baigong in northwestern China. The pyramid was destroyed, and only a small part of it remained. In the only cave, experts found a network of pipes that go up the mountain, and no one knows exactly where these pipes lead. Who could have built such a complex structure 150,000 years ago?

Delingha is a county-level city in Haixi Mongol and Tibetan Autonomous Prefecture, Qinghai Province. It is situated in the middle of a desert. The nearest settlement is 120 kilometers far, and the nearest city is 465 kilometers away. On the way to Delingha, one can see nothing but a lifeless desert.

Not far from the city of Delingha, there are two lakes, fresh and salt, as well as the 60-meter mountain Baigong, which the locals have been calling the “pyramid” since ancient times. In 1996, when examining this mountain, geologists discovered several caves.

Particularly, three dungeons were found inside the mysterious pyramid, two of which collapsed and became inaccessible. But the researchers managed to get in the third one. There, they came across strange pipes, and the cave seemed to be entangled in them. The Baigong pipes with a diameter of 2 to 40 cm were literally coming out of rocks, giving the impression of an artificial system.

Some of them were scattered on the floor, others led to a nearby saltwater lake. Interestingly, similar structures were found in the lower part of the lake. This mysterious discovery has puzzled scientists. The pipes, which appear to have been used to transport water, were located in a remote region in which no one historically lived.

The pipes were sent for research. The findings of the scientists, published by the Xinhua News Agency, were stunning. The pipes made the researchers doubt the entire human history. A series of following publications described the pipes as remains structures of aliens. It was a real sensation.

Local authorities, taking advantage of the situation, quickly created a tourist attraction. Signs to “alien structures” were placed on the roads, the Baigong pipes were included in local tour guides, and even a monument to aliens was erected there.

So what shocked scientists and the public? First of all, during the study, eight percent of the material that was part of the pipes was not identified. The rest of the composition included ferric oxide, silicon dioxide, and calcium oxide.

“The silicon dioxide and calcium oxide are products of long interaction between the iron and surrounding sandstone, showing the ancient age of the pipes,” one of the scientists named Liu Shaolin said.

In 2007, geologist Zheng Jiandong, who was also involved in the study, claimed that some of the pipes were highly radioactive. However, the public was shocked not by the fact that radioactive liquid was probably distilled through ancient pipes, but when it happened.

The age of the structures was impressive. According to scientists, the Baigong pipes were at least 150,000 years old. Taking into account the fact that modern history states the development of civilization over the past 30,000 years, the claim of scientists refuted all the established canons. Even within known history, the only people inhabiting that region were nomads, but they certainly could not create anything like that.

After the publication of the materials, many skeptics appeared. Archaeologists and scientists started talking about the natural origin of pipes. For example, all pipes are fossilized roots of trees that once grew there. However, it was not possible to scientifically confirm this theory, as well as to refute results. Moreover, the pipes were dated using thermoluminescence, a method that determines how long a crystalline mineral was exposed to sunlight or heated. The technique is modern, and nobody can argue with it.

Several theories have been proposed for the origin of the strange pipes. Among them is the theory of alien origin. So, according to a researcher at the Chinese Academy of Social Sciences named Yang Ji, the pyramid and its pipes might have been built by intelligent beings.

Unfortunately, the mystery of the pyramid and its 150,000-year-old pipes remains a mystery. The full research is hindered by the fact that Qinghai Province is closed to foreign tourists and scientists. Delingha is a strategically important area for China.